District Attorney goes for premeditated, first-degree murder; defense says Barajas was only shooting at the tires and didn't mean to hit anyone. 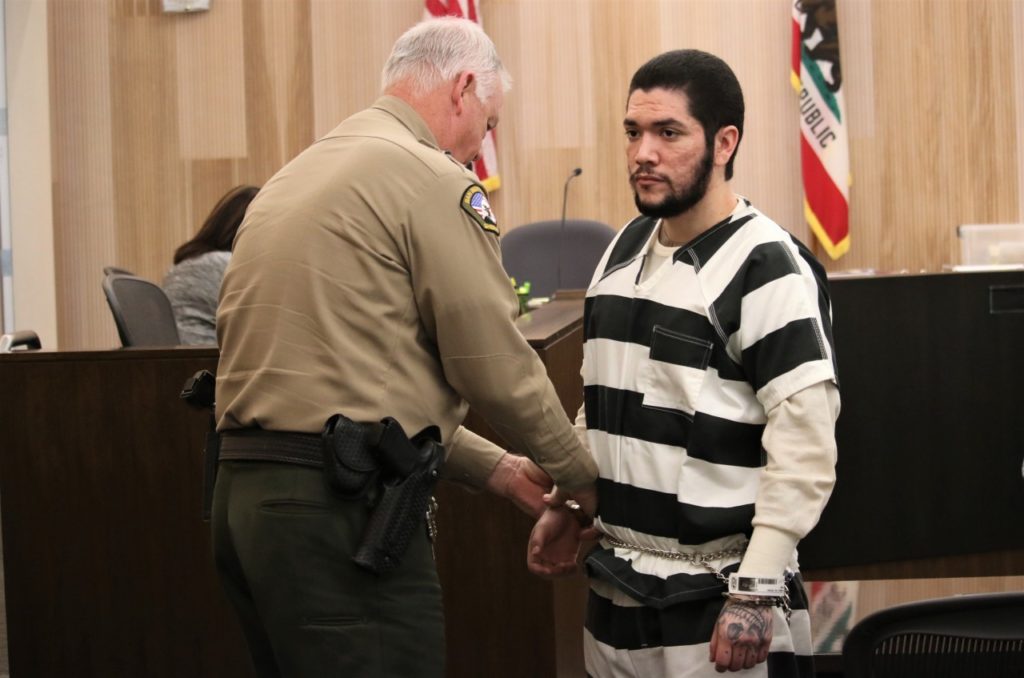 Jose Antonio Barajas stands at an April 15 hearing at San Benito County Superior Court. He will be tried for premeditated, first degree murder, attempted murder, kidnapping and other charges. Photo by John Chadwell. Hollister Police Officer Bo Leland was the first law enforcement officer to arrive at Hazel Hawkins after the shooting. Photo by John Chadwell. The DA had five years to build the case against Barajas. Hooper referred to these documents throughout the hearing. Photo by John Chadwell.
×

Following testimony from Hollister Police officers on April 15, San Benito County Superior Court Judge Steven Sanders agreed that there was sufficient evidence to arraign Jose Antonio Barajas on a single charge of premeditated first-degree murder, three counts of attempted murder and other charges including two counts of kidnapping and false imprisonment. Barajas is scheduled to be arraigned on May 2.

He is being held in San Benito County Jail without bail for the alleged murder of 19-year-old Ariana Zendejas on Aug. 1, 2014. After being on the run for four years, Barajas was located in Guadalajara, Mexico, on July 12, 2018. He was extradited and flown to San Jose the next day.

The case against Barajas, as presented by District Attorney Candice Hooper, was built on eyewitness testimony from Vanessa Flores-Ibarra and Denay Gutierrez, who were both in the car with Barajas on the day he allegedly killed Zendejas, and the driver of the other car, Gabriel Orozco.

At the hearing, Barajas’ defense attorney Gregory LaForge tried to convince the judge that the charge of willful intent, first-degree murder did not rise to the level of premeditation.

“According to Mr. Barajas’ statement he didn’t want to hit anybody,” LaForge told the judge. “He was shooting at the tires. That’s not willful and deliberate, premeditated murder. It’s not a first-degree murder.”

Hooper rebutted with testimony made by the police. She recounted how Barajas was searching for Orozco, who had vandalized his black Cadillac earlier in the day. She said that Barajas forced Gutierrez, who was driving, to follow Orozco when his car was spotted. Barajas then fired five shots at Orozco’s car, she said, killing Zendejas, who was sitting in the back seat behind Orozco.

Officer Bo Leland testified that he was patrolling on Aug. 14, 2014 when at 8:51 p.m. he received two dispatches almost simultaneously of shots fired near West and Monterey Streets and that a gunshot victim was being driven to Hazel Hawkins Memorial Hospital.

At the hospital, Leland said he found a red Honda Civic at the emergency entrance as hospital staff pulled Zendejas from the back seat. He said she appeared lifeless, was unresponsive and covered with blood. She died later while being transported by medevac helicopter. Leland also identified three other people who were in the car as Orozco, Robert Sanchez, and Timothy Ayala.

According to Leland, Ayala said he was in the front passenger seat, while Zendejas was behind Orozco and Sanchez was seated to her right. He said the group left a house on Jacqueline Drive and went east on South Street to Westside Boulevard, where they encountered a black vehicle (later referenced as a Volkswagen or Ford, which Hooper confirmed was a Ford) going north on Westside. Ayala recognized it as Gutierrez’s car. He also recognized Gutierrez and Barajas in the vehicle as it pulled in behind the Honda on Westside.

The vehicle “began chasing them through the city,” Leland said. “They ended up on B Street, between West and Monterey Street.”

According to Leland, Ayala heard five distinct gunshots. The back window was shattered. He told Leland he saw Ariana Zendejas slumped over and bleeding from the head.

Leland said that when Ayala looked back, he saw Barajas holding a gun out the window. Leland also said Sanchez told him he heard the gunshots, and when Zendejas (who Sanchez said was his girlfriend) slumped over next to him he told those in front that she had been shot, and they made their way to the hospital. Leland said there had been a conflict over Orozco dating someone who once dated Barajas that led to a series of events over two weeks before the shooting.

Earlier in the day, according Ayala’s statement to Leland, Barajas and some other men in two vehicles chased Orozco in his car. Ayala, Sanchez and Zendejas were in the car with Orozco. Someone in Barajas’ car threw rocks at Orozco’s car. Orozco managed to lose the pursuing cars and dropped Ayala, Sanchez and Zendejas at the Jacqueline Drive house because, Leland said, “He didn’t want them to be involved in the ongoing feud he had [with Barajas].” Orozco then went to Rancho Drive and vandalized Barajas’ Cadillac with a hatchet, Leland said. He returned to the house on Jacqueline Drive to pick up his friends and shortly after that, the shooting took place. Leland was called out to the vandalism incident at 7:24 p.m.

After the shooting, Leland said Flores-Ibarra’s mother told him she believed that Barajas had kidnapped her daughter.

Officer Stacy Esqueda testified that she spoke with Flores-Ibarra after she returned from Mexico where Barajas took her. She said Flores-Ibarra told her when Orozco’s car was spotted, Barajas told Gutierrez to follow it. She said Barajas leaned out the window and began shooting. Esqueda said Gutierrez then drove to Tres Pinos as Barajas phoned someone to be picked up. He also turned on a scanner app on the phone. They stopped at Bolado Road and met someone in a white SUV at the Immaculate Conception Church.

Leland said Gutierrez was dropped off at her residence before Barajas and Flores-Ibarra were driven to “someplace in the county to a residence on Fairview Road,” and then to a second location about an hour outside of town. She was kept in a garage there for about two weeks, Leland said. The person who picked them up took them down to San Diego, where they entered Mexico. They made their way over a week or more down to Guadalajara.

Esqueda said Flores-Ibarra told her that while in Mexico, as time went by, Barajas became more and more violent, beating her at least once a week and sexually assaulting her. She said he began taking drugs and she was convinced he would kill her. She was also pregnant and feared he would harm her unborn child.

According to Flores-Ibarra’s statement to Esqueda, one day she convinced a man who lived at the house where she was being held that Barajas would probably kill her. The man, who she only knew as Chaparro, helped her escape one night while Barajas was sleeping. He drove her to another city and she caught a bus to Tijuana, where she turned herself into the border patrol.

Hollister Police Department requests that anyone with information regarding the person who picked up Barajas and Flores-Ibarra at the Immaculate Conception Church in Tres Pinos, or any other aspect of the case, please call the department at (831) 636-4330.