Vanessa Flores-Ibarra, 20, is believed to have left the scene of August shooting with alleged gunman Jose Barajas and fled to Mexico 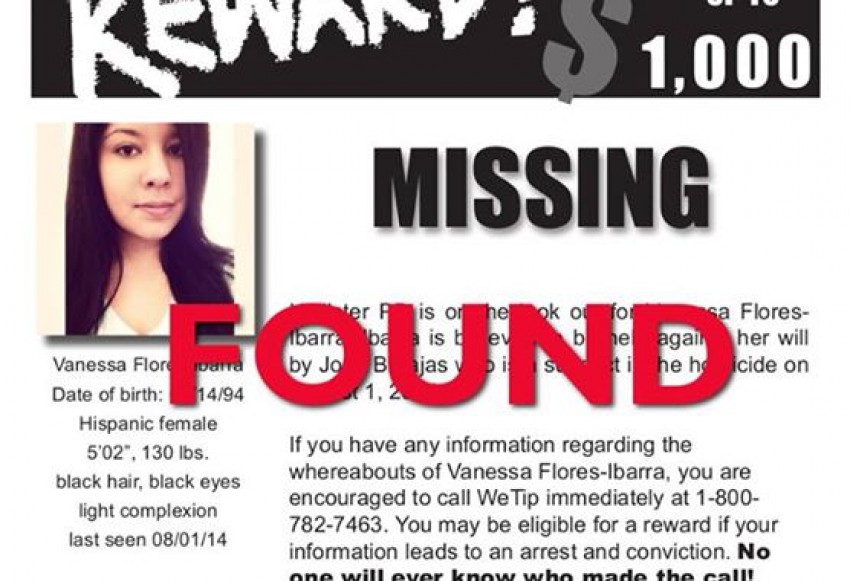 Hollister Police Chief David Westrick reported Monday morning that 20-year-old Hollister resident Vanessa Flores-Ibarra, who has been missing since Aug. 1 when Jose Barajas is alleged to have shot and killed Ariana Zendejas at West and B streets and possibly fled town with Flores-Ibarra, was located on Feb. 7 crossing into the United States by herself from Tijuana, Mexico.

U.S. Customs and Border Protection identified Flores-Ibarra and notified Hollister Police, who said that the woman is now home with her family. At an afternoon press conference, Westrick said “It has been a really tough case for us. We’ve made a lot of contacts and done a lot of investigation, but have been frustrated by the fact that Jose Barajas, the person who we think shot and killed Ms. Zendejas, is not in custody.”

Barajas, 20, has not been located and Westrick said investigators believe the suspect is still in Mexico and they believe Flores-Ibarra was with him there for a time. A $25,000 reward remains available for information leading to his arrest and conviction. Police last publicly addressed the case in late August, when they held a press conference to encourage the public to provide more tips in the case and to dispel rumors that the suspect had been taken into custody.

“Vanessa has been found and is home with her family,” Westrick posted on Facebook Monday. “We have had a very long night. I’m very happy right now, but we still have work to do to bring Barajas into custody.”

Saying that his staff “will never give up looking for” Barajas, Westrick in August said his advice to the alleged shooter is “to give yourself up immediately and let Vanessa return home to her family because we will never stop looking, ever.”

On Monday, Westrick said, “We are one step closer to solving this puzzle” and that he keeps a photo of Zendejas on his desk at work as a reminder. “I try to remind myself every day,” he said. “I’m a father and a resident of our county. I’m also the police chief. This case hit me hard.”

Police said in late August that none of Flores-Ibarra’s family members had heard from her since the night of the murder but they are still piecing together what happened since Aug. 1. Asked whether Flores-Ibarra could face charges as an accomplice in the murder, Westrick said, “at this point, we’re still vetting all the information that we have. Right now, she is listed as a returned missing person. Other than that, we still have a lot of work to do.”

Westrick said he did not “want to ruin the integrity of our investigation” by divulging too many details, as Flores-Ibarra will still be questioned about Barajas’ whereabouts. “It’s pretty normal for us to ask clarifying questions of anybody in a case of this magnitude.” Police did not want to say in which part of Mexico the suspect may be. Westrick said that he could not divulge the status of Flores-Ibarra’s health and that “we know she’s been in Mexico for a while.”

The Hollister City Council authorized offering the $25,000 reward for information leading to the arrest and conviction of Barajas and the return of Flores-Ibarra. The council’s action included approval of a $50,000 fund designed to encourge anonymous tips that could help the Hollister Police Department solve crimes.