A couple hundred people gathered to see veterans honored during 16th Annual Veterans Day Parade as 15 new banners were raised on the streets of Hollister in recognition of those currently serving. 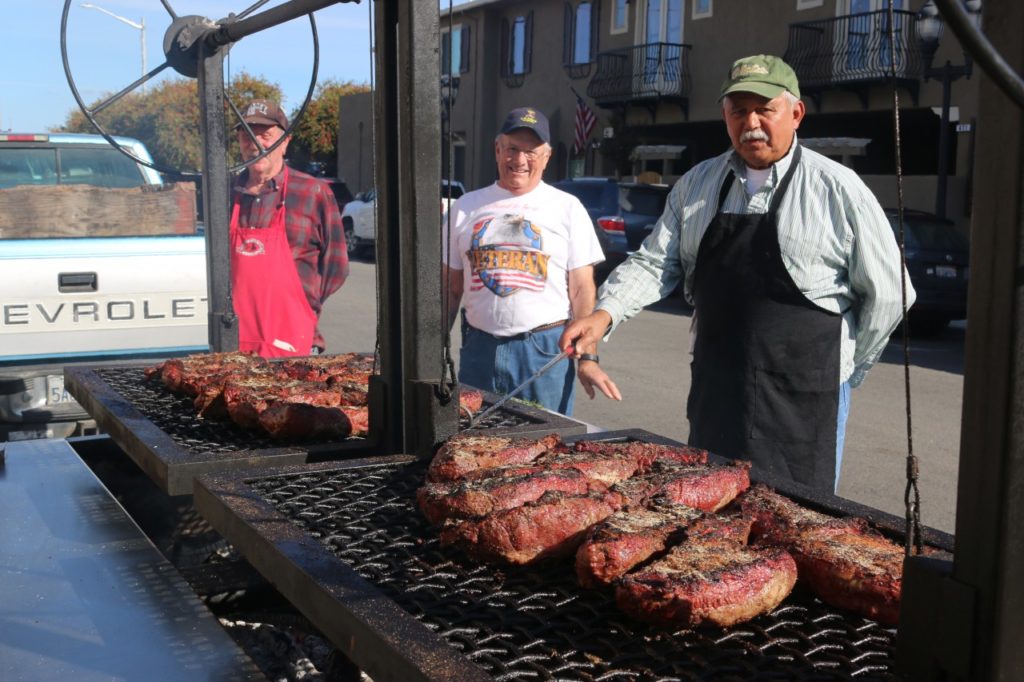 Two years after the end of World War II, there were 70 veterans in Congress. By the 1970s, nearly four of five members of Congress were veterans, the majority from World War II. Today, when less than one percent of the population serves in the military, 18.8 percent of the 115th Congress have served or are currently serving in the military, ranging from combat missions in the Korean War to Afghanistan and Iraq, according to the Congressional Research Service.

When Congressman Jimmy Panetta (D-Carmel) came to Hollister to speak during the ceremony prior to the 16th Annual Veterans Day Parade, he brought with him a message of service and sacrifice. A Navy veteran who served in Afghanistan, Panetta said it is important that veterans take part in governing the nation.

“I guarantee you’re going to see more veterans coming into Congress,” he said. “I think there are over 100 candidates across the nation who are veterans. In my freshman class of Congress there are two generals, there are Vietnam veterans, Iraq and Afghanistan War veterans, including Bryan Mast, a double amputee, who lost his legs from a roadside bomb in Afghanistan.”

Panetta said serving with fellow veterans in Congress creates a bond that goes beyond political affiliations to get things done, particularly where veterans’ welfare is concerned.

“If you look at legislation that has passed Congress there is a substantial amount for veterans,” he said. “This week we passed 16 bills out of the House of Representatives about veterans. There’s the G.I Forever Bill that was signed. There’s the Clear Choice Bill that makes it easier to step up the appeals process when you’re wrongly denied benefits from the VA. We made it easier to hire good people and get rid of bad people within the VA system.”

“That was largely because of legislation put forth by veterans,” he said. “It is important for veterans to serve and you hope that veterans and non-veterans understand that bond that it is important that we do things, and we do it together.”

The ceremony began with Panetta reading off the names of the 15 current active duty military to receive banners honoring their service to be placed along the streets of downtown Hollister. As he called off the names, parents and relatives lined up behind chairs where the banners were draped. Afterward, they carried the banners to light poles scattered along the streets where Boy Scouts and others helped raise them, where they will stay until the service member is discharged from the military.

In the crowd watching the ceremony were mostly Vietnam veterans and a few who saw action in Korea and World War II, including Walter Hemmingway from San Juan Bautista, a World War II vet. There was Russ Jenkins, who saw 18 months of action in the South Pacific with an aviation unit that supported the Navy’s 77th Seabees Battalion. John Trebino, from Hollister, served as an army paratrooper during World War II and the Korean War. There was also Stan Giles, who manned a machine gun in the back seat of a Dauntless Dive Bomber during World War II.

After the banner presentation, the ceremony continued inside the Veterans Memorial Building where a few hundred residents gathered to hear speeches, patriotic music and show honor and respect for the men and women who served.