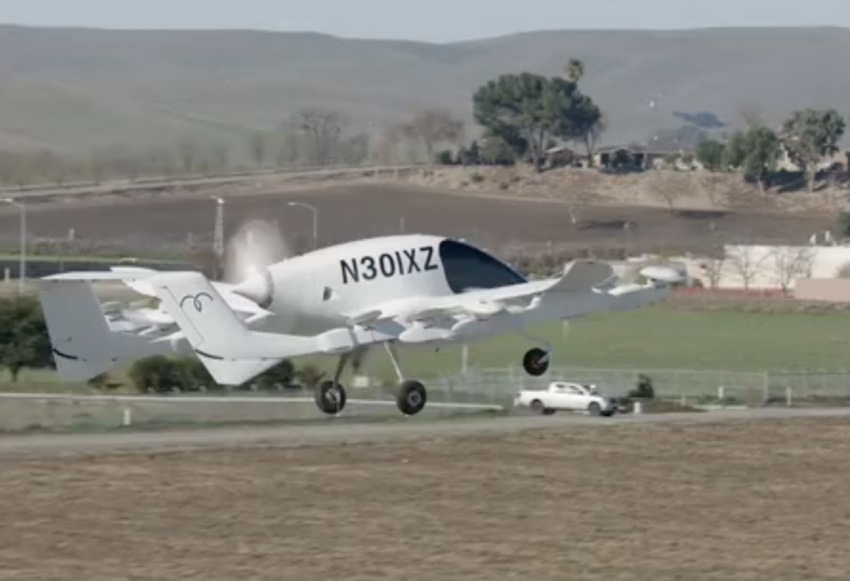 This article was written by BenitoLink reporter Jack Foley.

Google co-founder Larry Page has pulled the covers off his secretive Hollister-based project to build what is now known to be a sleek, high-tech, self-piloted air taxi.

It will first be put into service in New Zealand but all signs point to the strong possibility that it will be manufactured in a new plant at Hollister Airport by a workforce of up to 200 people.

Page’s Mountain View-based firm, Kitty Hawk, which is negotiating with the city to expand its leased facilities at the airport, launched a revamped website late Monday night that shows the first official videos of the aircraft, called Cora, along with a fact sheet and other details.

Here’s how it describes the revolutionary aircraft, which is operated by a pilot on the ground and carries two passengers.

“Cora is an air taxi designed and built by Kitty Hawk. It combines electric power, self-piloting software and vertical take-off to pioneer an entirely new way to fly. Cora is the beginning of a journey toward everyday flight, where air travel will be woven into our daily lives.”

Here’s more from the firm about its fancy new flight machine:

The aircraft will not be sold to the public; it will be “part of a service similar to an airline or a rideshare,” according to the Kitty Hawk fact sheet.

And it won’t be put into service anytime soon, the company acknowledged, not even in the land whose iconic national symbol is the flightless kiwi bird.

“We are not putting timeframes around when Cora will be available for public flight. We have a lot of work to do and we are working constructively with regulatory authorities. We are looking forward to being able to share our product with the New Zealand public when the time is right,” the fact sheet explained.

Hollister city officials were alerted to the announcement beforehand and asked not to discuss the matter publicly—and they will not.

While folks in Hollister know Page has been in town for some time testing and perfecting Cora, and that the video was shot in part at the Hollister Airport, neither the city nor San Benito County are mentioned on the website and the firm says it is not revealing the test site.

The website video clearly shows scenes from the Hollister airport, although it’s never identified as such.

On the Cora website is a detailed fact sheet that shows a “personal aircraft” design invented by Stanford scientist Ilan Kroo and whose patent was assigned late last year to Kitty Hawk Corporation of Mountain View.

Attached below this article are two US patent documents granted to Kroo for the “personal aircraft” and assigned to Kitty Hawk.

Kitty Hawk’s YouTube page has video of the Cora launch uploaded early Tuesday, along with the firm’s Flyer personal recreation vehicle, which some have called a flying Jet Ski.

As for whether Cora means jobs for San Benito County, that now seems more a possibility than ever.

At City Hall, airport manager Mike Chambless said he was notified by Kitty Hawk early Tuesday that a revamped website was up. The company has told the media that it is not granting any interviews. It also doesn’t want city officials discussing their plans.

“They asked us not to make comments. We are going to honor that request,” Chambless told BenitoLink on Tuesday.

It’s widely known that Hollister city officials have been huddled in negotiations with Kitty Hawk for months.

That much the city has acknowledged, largely because Kitty Hawk is already an airport tenant.

Also, since existing contracts cannot be altered, it seems likely that successful negotiations will result either in a second, separate lease or an agreement to cancel the existing one and replace it with a new contract.

When negotiations will conclude is unknown. However, the release by the firm of its new website materials, and a flurry of almost instantaneous media coverage, from the New York Times to The Verge web news site, suggest things might be moving quickly.

That’s also suggested by the scheduled announcement Tuesday in New Zealand by that country’s government that it has entered into an agreement with Kitty Hawk’s operator there, Zephyr Airworks, to test and implement a Cora-based air taxi service down under.

The first vehicle was shipped from the U.S. to New Zealand in October and testing began soon after, according to the Kitty Hawk fact sheet.

Neither elected officials nor city staff in Hollister has been willing to discuss details of the negotiations or Page’s plans, even though they have not signed a privacy agreement with the company.

Such agreements are common and perfectly legal, based on competitive considerations and proprietary information, when private firms and government agencies enter into negotiations on leases and business contracts.

The city of Gilroy recently spent about a year in negotiations with the largest water slide resort in the country to bring their attraction to the Garlic Capital of the World.

Because a confidentiality agreement had been signed, the citizens of Gilroy were kept in the dark about the talks. In the end, Great Wolf Lodge dumped Gilroy and went elsewhere.

It’s the potential for a similar scenario to unfold with Kitty Hawk that keeps Hollister city officials tight-lipped, several acknowledged. They fear Page will pull out of town if the city leaks anything about his plans before he is ready.

The consensus around City Hall these days seems to be that the potential benefits of a deal with Kitty Hawk are too important to the community’s economy, to jobs and to development plans for the airport to risk losing it.

Here is one reason why: Hollister’s airport has been very carefully and strategically positioned to move to the next level in airport development and operations and that move is underway.

That is, the airport would go from being a small outlier facility used mostly by private pilots and the state’s airborne fire fighting wing to becoming a strategically located hub of vital business air services and flight-related industries.

All of this would result in new revenue for the city.

But that is not all it means.

Hosting a leading-edge aeronautics firm connected to a high-tech legend such as Page and prestigious institutions such as Stanford University would redraw the map of who’s who in advanced flight research, development and production to include Hollister and San Benito County.

Not bad for one of the state’s least populated counties.

Or so goes the thinking at City Hall, according to insiders and savvy observers not willing to talk on the record.

Public documents obtained by BenitoLink show the city has already entered into a 36-year lease agreement for its facilities on both sides of the airport that Kitty Hawk has used for research, production and runway and flight-testing of the aircraft.

And while that many years are not uncommon, it suggests an investment in the city for the long haul, observers believe.

Sources familiar with Page’s plans who are unwilling to be named told BenitoLink that behind the scenes, the city and Kitty Hawk’s principals are nearing agreement on expanded production facilities on airport property to manufacture the aircraft. The plant would employ from 170 to 200 people, according to multiple sources.

BenitoLink could not confirm one source’s information that Page has bought or is negotiating to purchase a substantial piece of farmland immediately east of the airport runways, perhaps for an even larger manufacturing plant for Cora or the Flyer, the one-person recreational product that was tested in San Francisco Bay Area last year.

The most recent sale of that land, according to county documents, was in 2016 when Hollister businessman John Wynn sold the parcel from one to another of his own companies, the buyer being Ridgemark Corporation.

When the revamped Kitty Hawk website went live late Monday night, it marked what apparently was the first time that Page has allowed details of his years-in-the-making flying machine to go public in a big way.

Sightings of the futuristic looking vehicle, sometimes accompanied by a huge, orange-topped Sikorsky helicopter, taxiing down the Hollister runway, lifting up and down or in near-silent flight, are not uncommon.

It runs completely on electricity, is powered by rechargeable batteries, takes off and lands like a helicopter, does not need a runway to operate and will not be bound by any of the challenges and restrictions that accompany automobile traffic.

Cora can fly at altitudes from 500 to 3,000 feet, is powered by one propeller and moves through the air at about 110 miles per hour. It has a range between charges of about 62 miles, although that could increase with advances in battery technology.