Cave-in of $2.1 million realignment of Highway 25 could keep the new portion of the road closed for two years 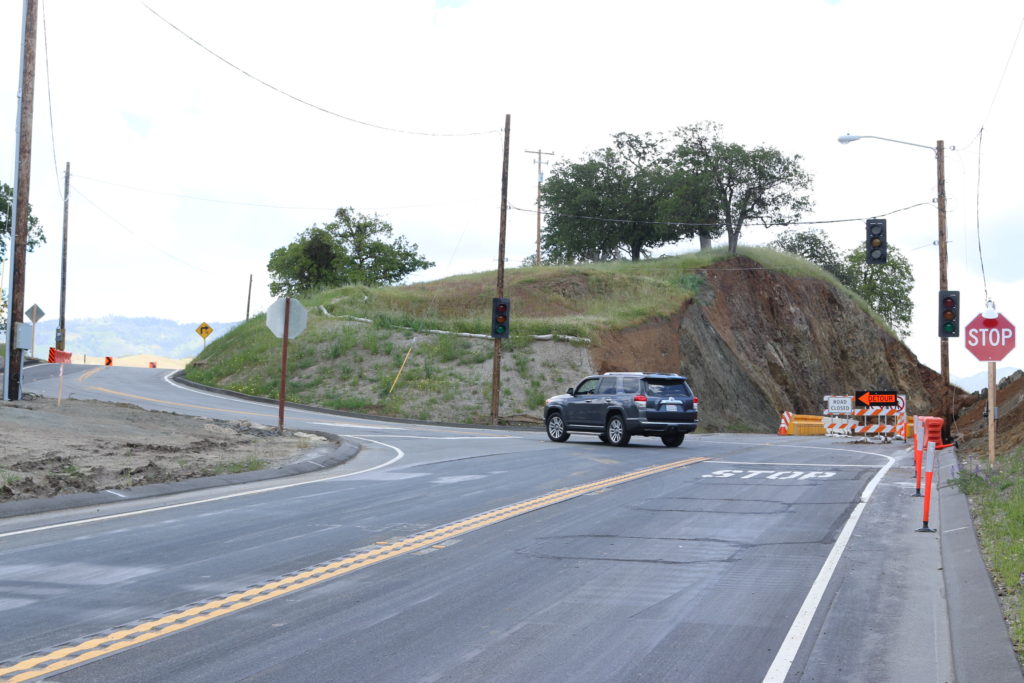 Vertical cuts meant to reduce encroachment on habitat will actually lead to even more encroachment. Photos by John Chadwell. The plan was to address safety issues along Airline Highway/Highway 25 (officially part of the State Highway Scenic System), just below the Route 146 entrance into Pinnacles National Park, at a hard left turn that a five-year Highway Patrol study supposedly identified as a site of numerous fatal crashes. When Caltrans began designing a cut across land that was the designated habitat of the California Tiger Salamander, as well as numerous blue oaks, the agency was determined to do the job to protect human lives while doing as little damage to wildlife habitat as possible.

It apparently did neither.

Now, a little over three months later, in what county Supervisor Jerry Muenzer has called “a fiasco,” the new road is closed, and could stay that way for two years or more; the old road is now the new road again; and the California Tiger Salamander will surely lose more of its habitat, not to mention how many more blue oaks may fall to the bulldozers’ blades.

As one of the state’s official scenic roads, the government with jurisdiction over abutting land must adopt a “scenic corridor protection program” that limits development, outdoor advertising, and earth-moving, and Caltrans must agree that it meets the criteria. This scenic road designation, however, can create conflicts with the property rights of landowners, which could happen if, as Richard Rosales, Caltrans’ deputy district director for program project management, described in a future mitigation scenario where more land will surely have to be secured in order to correct the mistake.

After Caltrans engineers designed the new, flatter, slower turn, the $2.1 million contract went to the lowest bidder, John Madonna and Company, out of San Luis Obispo. The construction company, according to Rosales, followed Caltrans’ engineering plan to the letter.

“They did a good job,” he said. “They performed the work according to the contract plans.”

The only problem was, Rosales admitted, those plans were wrong regarding soil conditions, and soon after the road was completed in December 2015, the slopes began to give way and landslides continually blocked the new road.

Alexander Schmidt and Helen Matulich, who live in the vicinity of the project, wrote a joint letter questioning the validity of the original realignment project that was based on alleged traffic fatalities at that site. They said locals are well aware of the many twists and turns along the 82-year-old road (formerly LRN 119), and believe that 90 percent of crashes involved speeding weekend motorcyclists rather than vehicles.

“Highway 25 is advertised in numerous magazines like a great race track and it is treated as such by many of the motorcyclists,” they wrote. “Speeding on this narrow, winding road is the reason for the higher-than-average crash rate, not the road. With that being said, the hard sharp turn one mile north of the project site is considerably more prone to crashes, almost every weekend in the summer. To be honest, Caltrans missed the worst corner on that stretch of the highway.”

Initially, Rosales told BenitoLink that he had the Highway Patrol report of fatalities that he said “triggered” the original realignment construction project; then he later emailed that he did not have the actual numbers, but assured BenitoLink, “the collision rate per million vehicle miles over a five-year period was significantly higher than statewide averages for similar highways.”

As for how many accidents actually occurred in the vicinity of the site, a Highway Patrol spokesman said there have been a total of 15 crashes in the area since 2013, and three fatalities in five years. There was no breakdown as to how many were vehicles versus motorcycles.

“Initially, the first 25 feet of the cut slope appeared to be laid back appropriately,” Schmidt wrote. “It looked as though it would hold earthen material in place with some minor erosion control. To take more of the crown out of the road, the contractor continued to deepen the cut. In doing so, the slope of the cut banks is now 0.25/1 by the project specs. Let’s just call it VERTICAL. I’m not sure where the geologist and the engineer on this project went to school, got their degrees or field experience, but they ought to get their money back.”

Beyond calling the project a fiasco, Supervisor Muenzer was guarded about his critique of the work because, “We have other road projects with Caltrans and we (board of supervisors) don’t want to rock the boat.”

Caltrans’ Rosales admitted the state agency got it wrong from the onset of the project when dirt samples were examined and incorrectly determined to be stable enough for the project.

“The material itself is not what was expected from our preliminary geotechnical report,” he told BenitoLink. “There was some clay layers mixed in with fractured rocks that were causing these failures. When they were doing the cut, they (John Madonna and Company) did notice some difference in materials, but it was determined (to go ahead) to see how that slope would perform. We started having slope failures when the first rain hit. There were landslides onto the shoulder and the highway.”

Rosales said Caltrans has since instituted an emergency project to open up the old highway again and the old alignment. In layman’s terms: a detour to replace what essentially was already a detour. All-in-all, the original road now has stop signs and blinking red lights at both ends of the turn to allow “for more free-flowing, higher speed traveling through the section,” which is not the case because motorists must now stop at both ends, while traveling in either direction. He said the stop signs at the north end will be removed soon, but was not sure when the signs on the south end will be taken down.

“The new road is still closed and we’re going to be evaluating a long-term fix for that, so we have a restoration project to evaluate and determine what the long-term fix will be,” Rosales said. When asked how long it might be before the road will open again, he responded, “I would say longer than several months; maybe a year or two, is my guess.”

Rosales said he did not know if anyone from John Madonna and Company ever contacted Caltrans during construction to question the workability of the design. He said there has been no determination of how much the newest fix will cost, but he was sure there would be more of an environmental impact on the salamander habitat.

Upon driving out to the site, BenitoLink found that the new cut through the hillside intended to save motorists from harm is almost totally caved in on one side and blocking the north-south side of the road.

John Madonna and Company did not respond to Benitolink prior to publication.