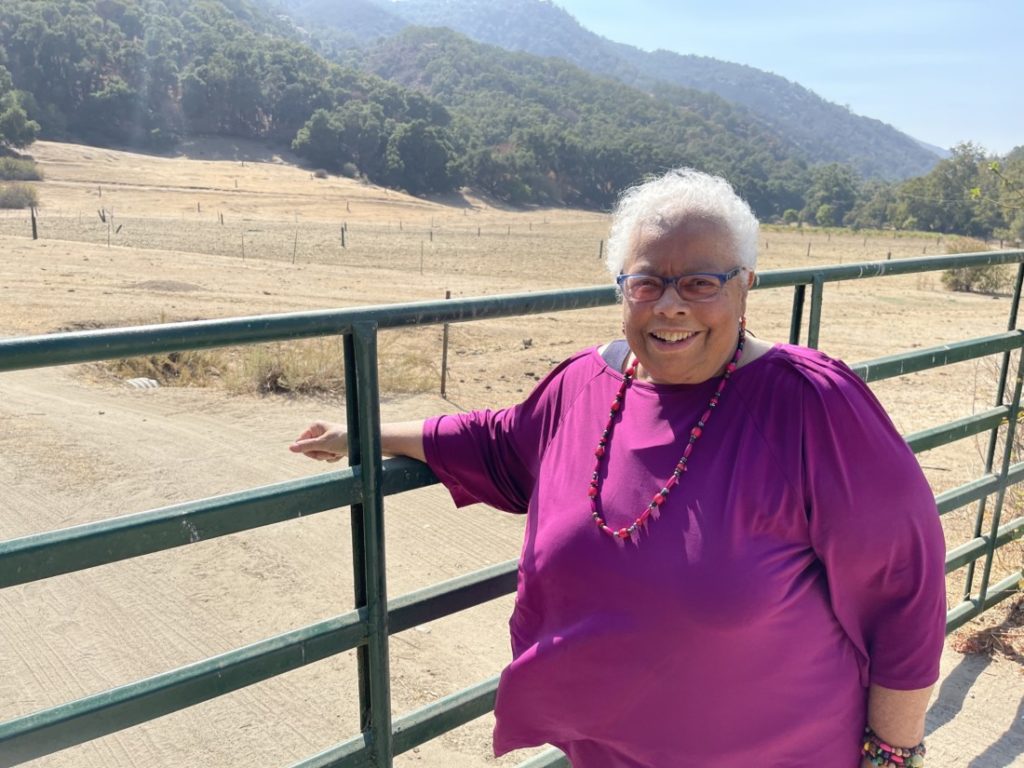 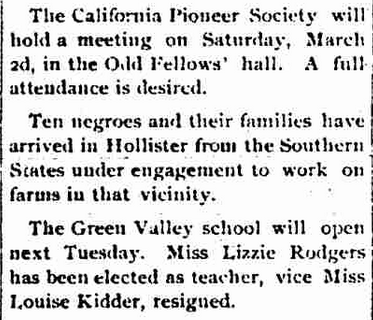 The arrival of the Gilmores, February 2, 1889, Hollister Free Lance. 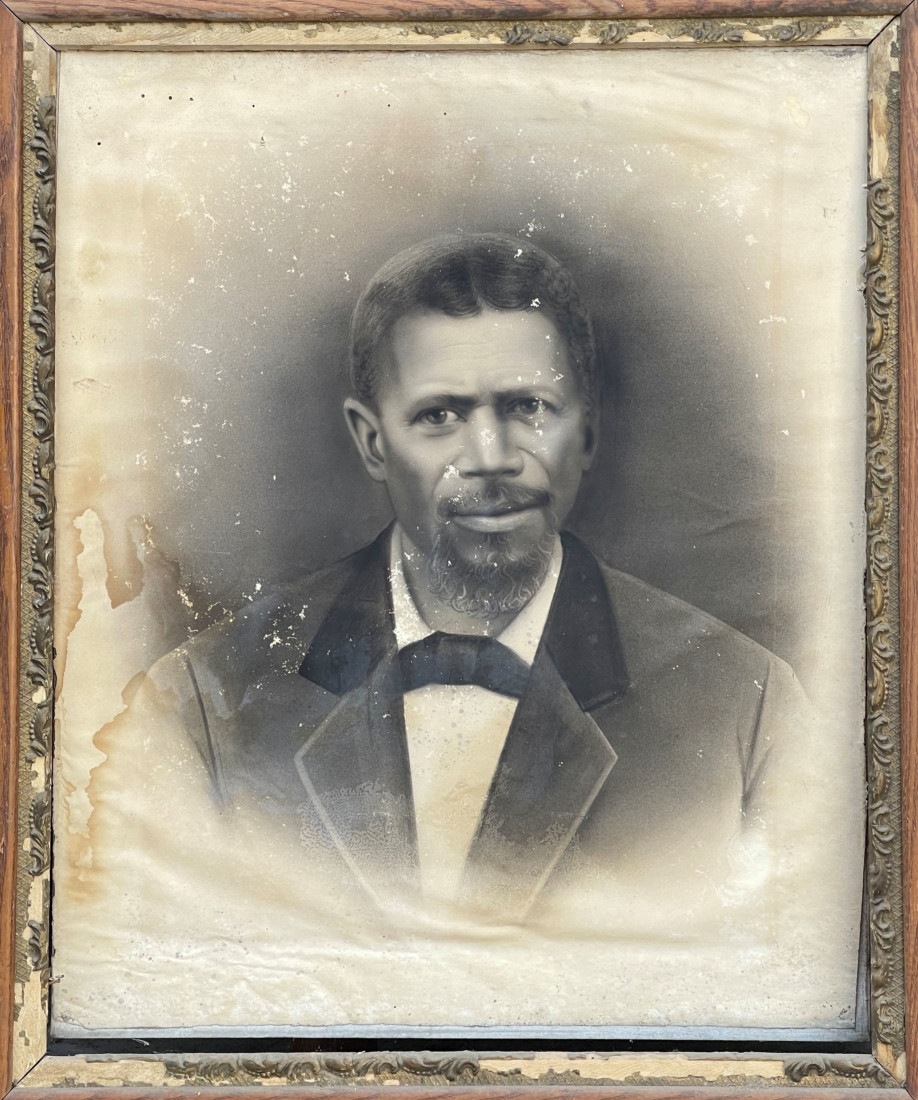 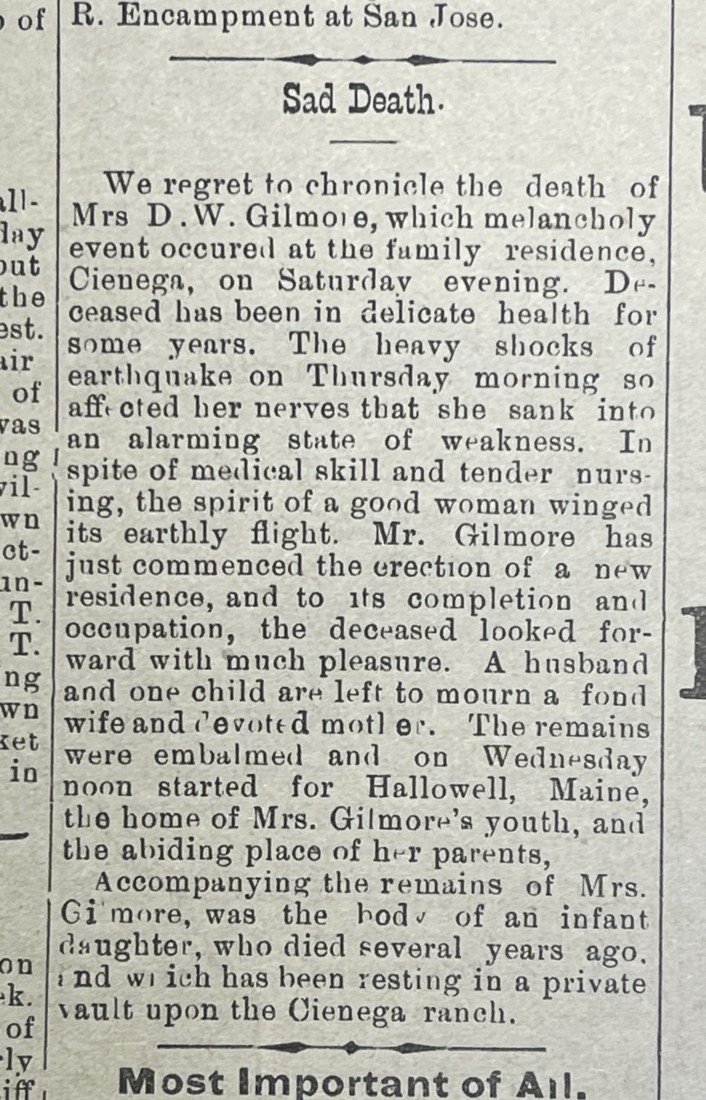 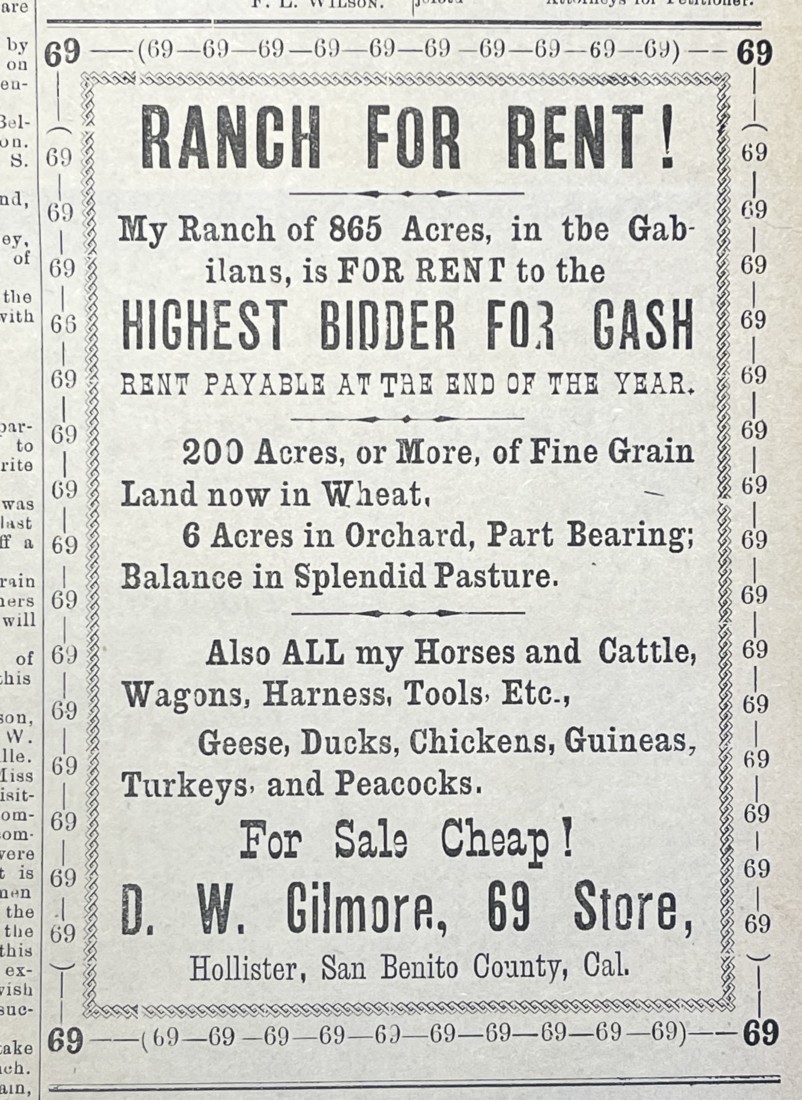 BL Longform articles are designed for a more leisurely reading experience. You can print BenitoLink articles by clicking on the printer icon at the top of each article. This is the second of a three-part series of articles on the rise and fall of Gilmore Colony. Read the first article of the series here.

On Feb. 2, 1889, a train arrived in Hollister carrying five former slaves and their children who were coming to work for Daniel Gilmore at his 465-acre farm in Cienega Valley. The Hollister Free Lance recorded the scene:

“The party, when the train arrived, proved to consist of ten Negroes of different ages and shades . . . An aged negress, Aunt Mary by name, black as ebony, with a gay bandanna fantastically wound around her head, joyfully welcomed Mr. Gilmore with a great show of affection. Well she might, for in the dark days of slavery, she and her husband, who accompanied her, were both the property of Mr. Gilmore’s father, and his mother dying when Mr. Gilmore was three weeks old, Aunt Mary raised him. Years had passed since she had seen her young Massa, and her joy at beholding him was unfeigned.”

The article describes Scott as ”a “coal-black, stalwart young African, and very intelligent.” He spoke of efforts made in Arkansas to force former slaves to remain working there:

“When it is discovered that a Negro is intending to leave for California . . . it is next to an impossibility for him, if he has any property, to dispose of it at any price to any white man,” Scott said. “They will not give him twenty-five cents on the dollar for it. . . . There is a great desire among all the Negroes to get away from the south to a region where they can get decent wages and not be the objects of a regular system of robbery.”

There were two more groups that arrived in two-week intervals, bringing the total to around 45 people. The second group included Thomas Gilmore (Scott’s father) and 105-year-old Julia Cole, who died a year later.

For Daniel, Thomas was an especially welcome sight. In one letter to Scott, Daniel wrote, “Take good care of Uncle Tom. . . . Tell him he is the only father I have got and I want to keep him a long time.”

At first, things on the farm seemed to go well. Daniel and his wife Rhuanna had a daughter, Florence, on Feb. 18, less than three weeks after Scott’s arrival. Scott’s daughter Lena, the first Black child born in Hollister on record, came a few months later.

By mid-June, Daniel owned 866 acres of land, which previously had been known as Blackberry Farm.

The southern border of the property faced the Carl Palmtag property, the current location of Eden Rift Vineyards and DeRose Winery. From there, it ran north on Cienega Road south of Hollister for two miles. The Gilmores lived near Bird Creek, which crosses the property at the north end, near the Hollister Hills State Vehicular Recreation Area main entrance at 7800 Cienega Road. The workers lived on the flat area of the property, in what the assessor referred to as “four tenant buildings.” Daniel and his family lived on a knoll overlooking them.

On June 21, 1889, the Hollister Free Lance published our only glimpse into the Gilmore ranch. The families Daniel brought from Arkansas are mentioned a few times, first introduced as a “colony of negroes . . . over forty of them, large and small.”

However, the article was less a news story than it was a lengthy real estate advertisement praising the virtues of the property.

At this point, half the property had just been acquired and workers were still clearing out the old-growth oak trees and native vegetation from the other half. Planting had begun only four months earlier and the claim of abundance of crops comes off as dubious.

The reporter lists, for example, “new plantings and crops” such as apricot, cherry, fig, olive, apple, pear and plum trees “with fruit already forming” along with fields of tobacco, peanuts, watermelon and cotton.

The reporter quotes Daniel as saying the cotton was “growing as nicely as I ever saw it grow in Arkansas. The first thing I know the darkies will have every flat I’ve got planted out in cotton.”

The article also mentions the ranch having a hundred head of cattle as well as chickens, ducks, geese, rabbits and Guinea hens.

It’s unlikely that the Gilmore property was as successful as the article claimed. The assessor records for that year tally only eight horses, 12 colts, one cow, and $5 worth of chickens. It takes two or three years for newly planted trees or vines to produce fruit. Arkansas crops like cotton need water-retaining loam soils, not the fast-draining limestone soil of Cienega Valley. There is very little flat land, as off-road users of the Hollister Hills trails know.

The workers were reported being paid $30 a month, and that many of them bought “small ranches of fifty acres on the back end of the ranch . . . and are putting in their spare time cleaning them up.”

Again, the assessor disagrees. Records show that Rhuanna owned all the land and none of the former slaves owned anything. The article mentions the workers paid rent for their land in labor—they were sharecroppers, as they had been in Arkansas, not owners.

The impression left for the reader is what Daniel intended, that he was “satisfied by actual experiment that the land was all he could desire.” And his intention was that “soon [he] will have the whole ranch subdivided and placed on the market.”

The article also mentions that Daniel had planted “seeds that were brought here by the negroes, who love to surround themselves with what will bring to their minds memories of their former southern life.”

This is a bit of misdirection typical of Daniel distancing himself from the former slaves in public. In one of the letters that Daniel sent to Scott before he left Arkansas, Daniel specifically asked Scott to bring seeds with him to California to plant at the farm.

“Save me all the kinds of seeds you can get, both tree and vegetable,” Daniel wrote. “All kinds of seeds of vines, etc. etc. Hull me a lot of walnuts, hickory nuts, and pecans.”

Antonia Martin, Scott’s great-granddaughter, said that this distancing is a product of the social pressures of the era.

“You have to remember that it was a different time,” she said. “As a white man, he could not be seen to have any kind of close relationship in public with Black people. In private, he could be close to them, but never in front of other white men.”

The beginning of the end of the ranch

Whatever plans Daniel had, his wife’s sudden death on April 27, 1890, changed everything. Daniel had been freely using Rhuanna’s inheritance. The land had been purchased in her name and the farm belonged to her.

Her will, which she filed just before her daughter was born, left the land to Daniel. In a letter filed with the will, she pleaded with her family not to contest it: “It is my most earnest wish that Mr. Gilmore shall have my ranch . . . without any opposition on your part. He has so many depended on him, negros as well as others, that if left entirely to his own resources the burden would be pretty heavy for him to carry.”

There was no more money from Rhuanna’s trust beyond $125 paid monthly (roughly $3,750 in today’s money) for his daughter’s needs. Despite her generosity in giving him the farm, he could not make a success of things. He was desperately overextended.

His first response to her death was to try to sell his hardware store a week later through a newspaper advertisement. There were no takers. In another advertisement two months later, in June, he made his first attempt to sell the property, again failing to find a buyer.

Though struggling and in debt, he continued to buy property using the money intended for his daughter. He purchased small lots in Hollister and took over the mortgage on a flour mill.

In July 1892 he tried, unsuccessfully, to sell the land again. A month later, his heavily insured house burned down—the first of six times over the next five years that he would lose his house in a fire.

By 1893, assessor records indicate Gilmore had mortgaged all the property he owned, in and out of town. By the end of 1895, local newspapers were reporting that he had lost everything, moved to a small house in Santa Cruz, lost that to foreclosure, and was threatened with jail for being unable to pay a $150 fine.

Left with nowhere to go after the sale of the Cienega Valley farm, the former slaves from Arkansas continued their exodus, coming down from the hills to find work and rent homes in Hollister. 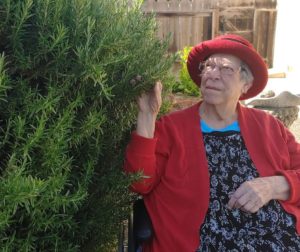 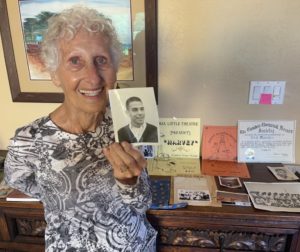 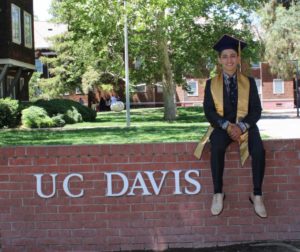