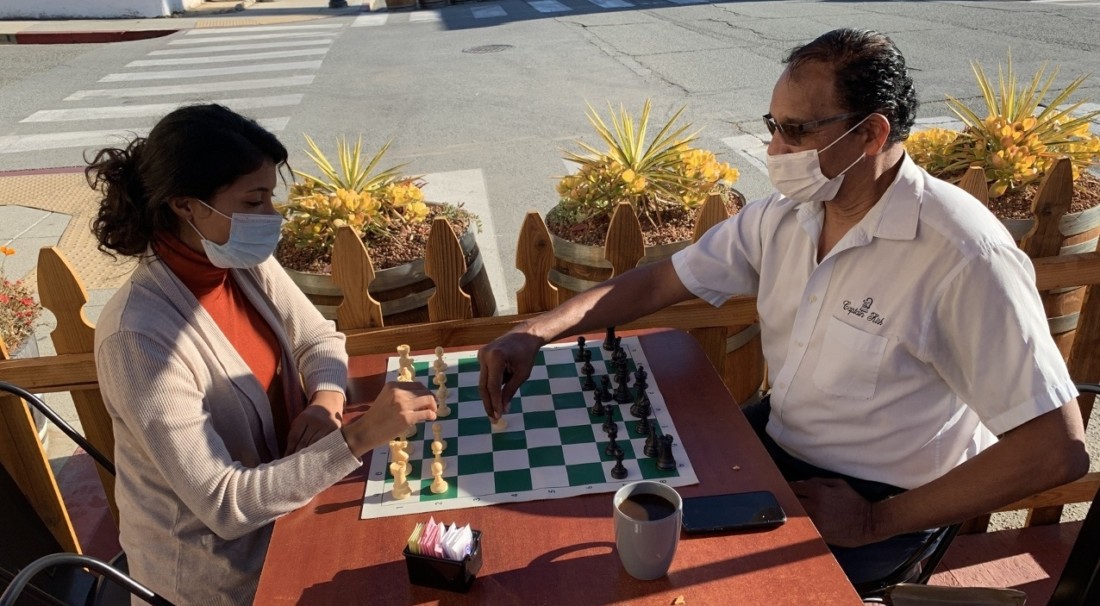 Ken Kirkland remembers the first time he won against his father at chess.

“I was 11 or 12 before I finally beat him,” Kirkland said, “I remember the moment that I put the piece down to seal the deal. He was first in shock, then he looked embarrassed, then he got a look on his face like I had just gotten a badge of accomplishment.”

Kirkland has been playing chess since he was four years old. “I am going to reserve how many years it has been since,” Kirkland said, “but I will say it is over 40.”

Chess is an ancient game, with its origins traced back to sixth century India. Two players each use 16 pieces to try to dominate the 64-square board. The game ends when one player places the piece representing the opponent’s King in a position of unavoidable capture, known as a checkmate.

With the Netflix miniseries “The Queen’s Gambit” creating a resurgence of interest in the royal game, Kirkland has set his sights on bringing chess to the San Juan Bautista area.

“I have a friend I play chess with in Morgan Hill,” Kirkland said. “And he told me there was nobody teaching chess in San Juan Bautista. So I decided this was going to be one of my landing points. My whole goal is to have a tournament here one day, maybe in the spring. I want San Juan Bautista to have its first United States Chess Federation tournament.”

Kirkland picked up his interest in chess from one of the nuns teaching at the Catholic school he attended in his youth.

“She introduced me to two things I had never heard of: chess and opera,” Kirkland said. “They did not teach either there, but she thought I had the aptitude for them. I learned from her, with her setting up the standards. Later on, when I was six, I found out my dad played chess and that is where the battleground was formed.”

Kirkland started playing at school, and at chess clubs and tournaments in the Cleveland area. He found chess broke down barriers to opportunities that might otherwise have been denied a Black youth.

Kirkland said he became exhausted with the pressures of tournament chess and moved on to casual games and teaching instead.

“I got a little frustrated with the United States Chess Federation,” he said. “I started playing what they call ‘coffeehouse style.’ I hung up the tournaments because they made me over-competitive, and I want to reserve that energy and skill to teach other people how to play quickly.”

Kirkland started teaching chess around 1982, when he was going to community college, as a response to what he saw in his fellow students.

“I noticed the kids were having a problem with school, particularly kids at risk,” Kirkland said. “I determined they had problems because they were too emotional. They didn’t plan. They didn’t think in advance. So I developed a program called ‘Think Before You Move.’ It centered around the rule that if you touch a piece in chess, you have to move it. And there is no second chance. So you really need to think about the consequences of your move.”

He began with programs in two schools in Cleveland and said local educators were impressed with his results.

“They told me as a result of the class, the level of intelligence and patience in those kids rose up,” Kirkland said. “It is something I really hold on to today.”

Kirkland said he has taught chess professionally for 20 years and has successfully used this program in over 70 schools across the country. Because of COVID-19 restrictions, Kirkland now offers instruction through his website, Kaptain Kirk Chess.

“I offer Zoom classes and it is attached to an online class which allows students to learn 24 hours a day,” Kirkland said. “It is another nice way to keep the kids active rather than just watching TV. The key thing about chess is that it is a way to exercise and measure your ability to focus, which is really vital to everything you do in life.”

While getting the word out on his classes through social media, Kirkland has also been playing chess at the parklet in front of Mrs. B’s Z-Place in San Juan Bautista, owned by his friend Patricia Bains, and offering impromptu instruction to passersby.

Recently, BenitoLink caught up with Kirkland as he was explaining details of the game to local resident Ruby Hill.

“I thought his approach was very interesting,” Hill said. “He connected the game to love and how men and women relate. He explained how chess is creative and mathematical at the same time, which I like as an artist. It seems like he has a deep understanding of the game and also of the game of life.”

Kirkland is interested not in producing the next Bobby Fischer or Beth Harmon, and in fact will hand off his more advanced players to professional chess coaches.

“The type of people I want as students are not chess experts,” Kirkland said. “I am interested in the people who don’t know how to play or found it impossible to play. I get a great joy in showing them how this can help them to achieve the goal of playing and perhaps use that towards their other goals.”