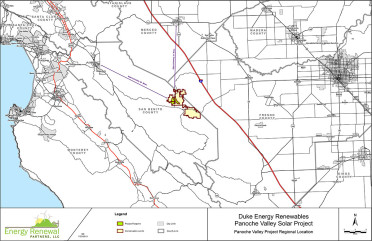 The Sierra Club and the Santa Clara Valley Audubon Society have reignited their effort to halt the $650 million, 2,400-acre Panoche Valley Solar Project by filing a lawsuit against the San Benito County and the Board of Supervisors in local superior court, claiming that environmental impacts of the project still have not been adequately addressed. The environmental groups are challenging the certification of the final supplemental environmental impact report (SEIR) for the project, as well as the approval of the project's amended use permit.

The groups claim the final environmental report for the project provides "inadequate mitigation measures regarding the Project's potentially significant environmental impacts to biological resources," such as wildlife and groundwater.

In the June 18 filing, attorney Donald B. Mooney asks the court to vacate and set aside certification of the final SEIR and all approvals of the project, on the grounds that it violates the California Environmental Quality Act (CEQA). The petitioners also seek the suspension of all approvals and construction contracts for the project, until the project complies with CEQA. The court filing also asks for the preparation and circulation of a new supplemental EIR for the project.

The San Benito Business Council criticized the lawsuit, pointing out that numerous, previous legal challenges have been denied and claiming that the project would have a benefit of approximately $40 million during its life cycle.

Business Council Vice President Bob Tiffany, owner of Tiffany Ford in Hollister, called the project "good for the country, the state and our county." He added that it is "ironic that outsiders from the Bay Area, where the economy is booming, (are) coming out here to try to tell our county what is good for us. They tell us to put the project somewhere else, but somewhere else won't impact our economy. We need the jobs, the revenue. It's time for this project to move forward at long last. It is time for the outsiders to admit defeat and move on to the next battle."

Those legal battles over the project have spanned half a decade, with the most recent county action occurring May 19, when the Board of Supervisors unanimously rejected appeals to the county Planning Commission's approval of a supplemental EIR for the long-planned 247-megawatt project, which is approximately two miles southwest of the Fresno County line and the Panoche Hills in southern San Benito County, approximately 15 miles west of Interstate 5

County supervisors in October 2010 certified the final EIR for the solar project and the planning commission unanimously approved its use permit. A month later, the board considered an appeal of the commission's approval and unanimously upheld the decision, adopting an ordinance approving a development agreement for the project. Those actions prompted several project opponents to sue the county, alleging the certification of the final EIR and approval of the project was unlawful and violated, among other laws, the Williamson Act and the California Environmental Quality Act.

In the lawsuit, Mooney says that the petitioners are not outsiders, but rather representatives of people who would be impacted by the project.

Sierra Club members, the lawsuit states, "live work, travel and enjoy recreational activities in San Benito County, including visiting Panoche Valley to bird-watch and enjoy nature. Sierra Club and its members have long advocated for the rare species that live in the Panoche Valley and have a direct and substantial interest in ensuring that (the county and Board of Supervisors) comply with laws relating to environmental protection."

The lawsuit also says that the Santa Clara Valley Audubon Society's 3,000 members "frequently visit Panoche Valley and have a deep interest in the protection of bird and wildlife species and the habitat they depend on in the Panoche Valley."

Margie Barrios, chairwoman of the Board of Supervisors, said she urged "the groups who have fought us every step of the way … to let us, as San Benito County, to bring the project to fruition. Our community, the courts, our staff, the developer, these supervisors and two former have found a balance to protect endangered species while providing a means for human beings to survive as well. We need the jobs, we need the economic benefits, we need the renewable energy, we need an environment that can survive our changing world. Please help us instead of hindering us."

The lawsuit claims that, despite recent revisions to the solar project based on comments from the California Department of Fish and Wildlife, the supplemental EIR "contains legally inadequate and flawed mitigation measures."

Supervisor Robert Rivas said that San Benito County needs to "look beyond oil" in the wake of the passage of Measure J, which bans fracking and other high-intensity oil extraction measures in the county. He said the solar project gave him "my opportunity to act to reduce our reliance on fossil fuels. We needed to focus on alternatives, produce clean energy, fight global warming and reduce carbon emissions as mandated by state law under AB 32."

The Sierra Club and Audubon Society's lawsuit seeks re-circulation of the final SEIR because it includes new information on environmental impacts to avian species such as the California Condor and Tri-colored Blackbird. The suit says that areas like the Panoche Valley "will likely serve even more important (species) recovery roles, as areas previously suitable become unsuitable as climate change progresses." Further reducing habitat like that found in the rural, southern reaches of San Benito County "could be the tipping point that could prevent species recovery."

In a statement provided by the Business Council, Congressman Sam Farr, whose district includes San Benito County, said “San Benito County banned fracking against the wishes of Big Oil. Now it’s leading the way with renewable solar energy development. I supported the fracking ban, and also support the Panoche Valley Solar Project and call on fellow environmental and wildlife stewards to do the same. It’s a good project that benefits both the environment and the San Benito County economy."