Professor of Anthropology at Gavilan College, Debbie Klein, named honorary chieftain of a village in Nigeria where she has close ties 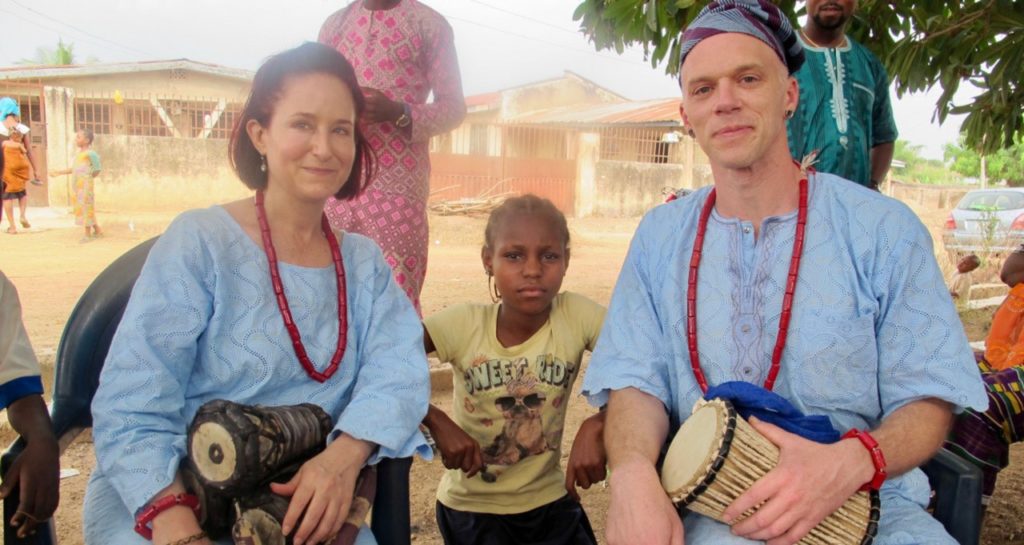 It’s not every day that honorary chieftaincy titles from Nigerian town are conferred, but Gavilan College Anthropology Professor Debbie Klein earned such an honor. Klein was recently named Iyalode Aare Erin-Osun, which translates to something like “Chief Mother of the town of Erin-Osun” in a ceremony last Saturday in Nigeria.

Klein is the director of Gavilan's anthropology program, having helped shape the college's curriculum over the past dozen years at its Hollister and Morgan Hill (and now, Coyote Valley) sites.

For the residents of Erin-Osun, chieftaincy titles are similar to lifetime achievement awards. The title is meant to honor people who have done something exceptionally great for the town. When a Nigerian friend of Klein's asked her in November if she would travel to Nigeria to accept, she was surprised. “I didn’t expect this, especially so early in my life,” says Klein. “It was shocking to me, and quite an honor.”

Klein has been visiting Erin-Osun, located in the southwestern part of Nigeria, to conduct anthropology research for about 20 years. Specifically, her research has focused on the Bàtá style of drumming and dancing that has persisted in Erin-Osun for more than 400 years. While the original intent of Bàtá is spiritual, Klein has found that the ancient drumming and dancing style kept alive in Erin-Osun has great popularity throughout the world. Because of the slave trade, Bàtá made it way to places like Brazil and Cuba.

“I grew up in Tampa,” says Klein. “It was Cuban Bàtá that I first learned about, and as a young anthropologist, I was interested in finding it’s origin.”

That passion took Klein to Nigeria seven times and counting, and she conducted the bulk of her research while living in Nigeria from 1996 to 1998. Over the years, Klein has also learned to speak Yorùbá, the local language.

When speaking to Klein, it’s clear that her passion is not just for academics alone. She’s also grown to love the people who keep these ancient traditions alive. She wrote a book in 2007, “Yorùbá Bàtá Goes Global: Artists, Culture Brokers, and Fans” that features a family from the town.

Klein is also fascinated by the powerful global network that her artist friends in Nigeria maintain with their fans. It is this network that has allowed the residents of Erin-Osun to thrive despite living in what Klein calls a “country that is struggling with it’s national economy.” She has found that fans of Bàtá live all over the world, in places like Japan, Germany, Brazil, throughout Europe, and even San Benito County.

It is this research that the villagers of Erin-Osun wanted to recognize when naming Klein an honorary chieftain of their village. And proving that this is really all about family, in this case, Klein wasn’t the only honoree. “When honorary titles are granted,” Klein explains, “spouses must also receive a title.” Since Klein’s partner of 13 years, Bryce Florian, was enjoying his very first trip to Nigeria, he was also honored as Akogun Aare Erin-Osun, or “Warrior Chief of the town of Erin-Osun.”

Klein posts videos to her website of the dancing and drumming. She says it’s one of the ways she’s tried to give back to the community. “I’ve tried to put Erin-Osun back on the map by documenting the specialty of the families that practice this art form,” she says.

The new chieftains already have another long-term project in the works—a music and art school for local and international students. Klein hopes that this sustainable development project that will help Erin-Osun and keep the families employed for many years to come.