Rachelle Escamilla returns to her hometown for a meditation on farm labor life. 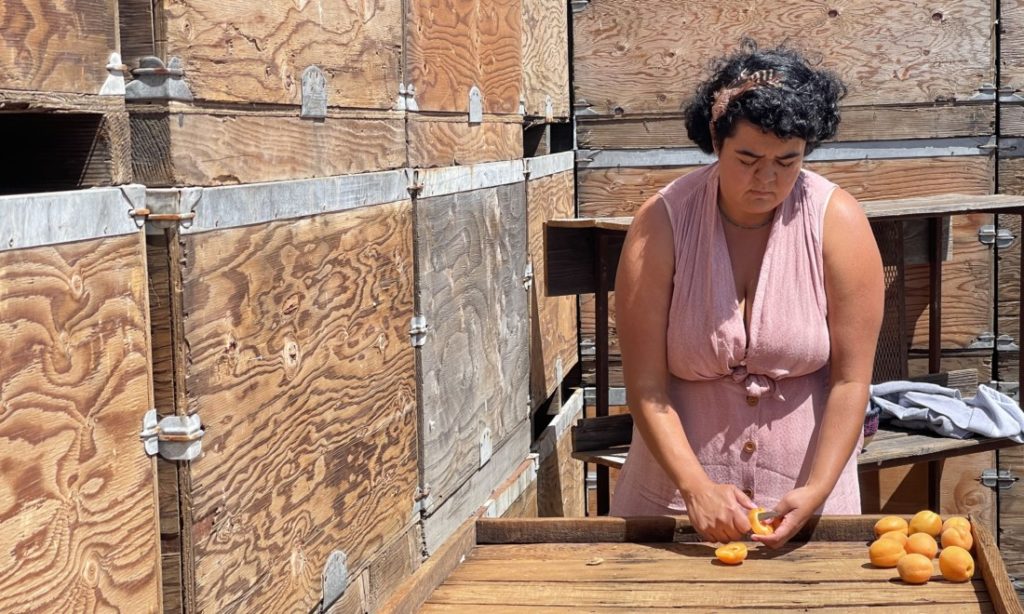 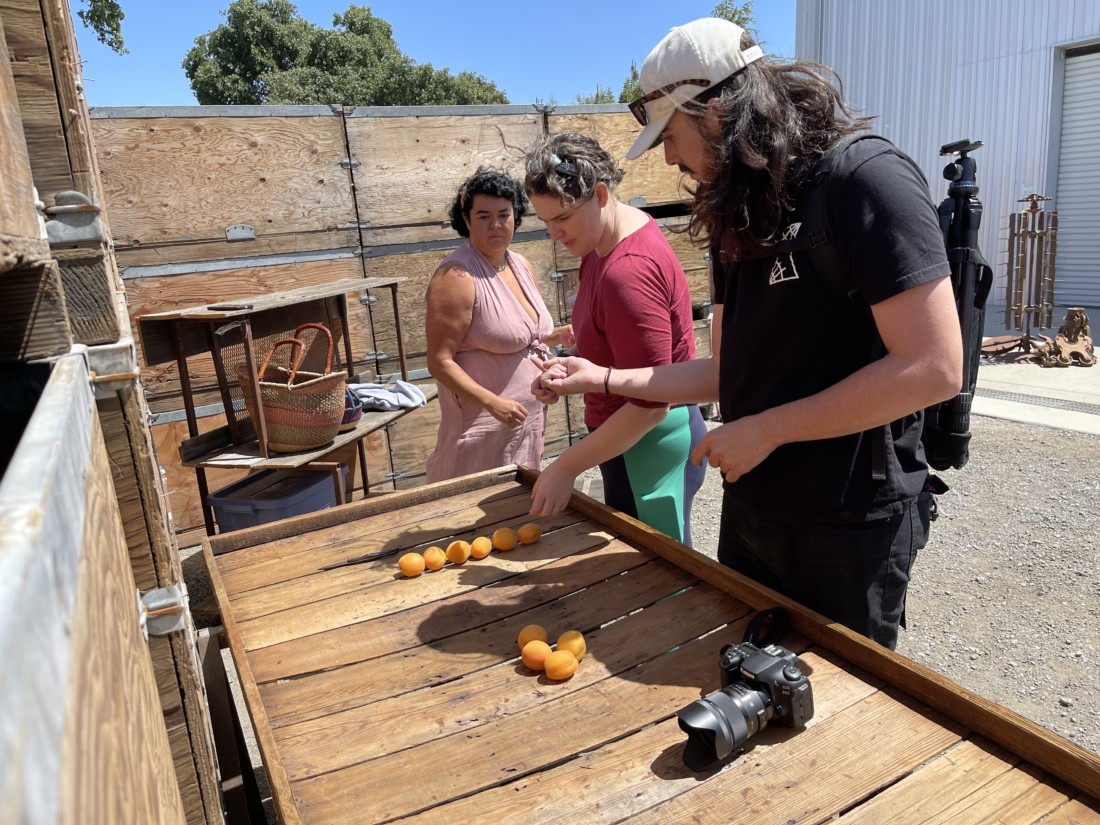 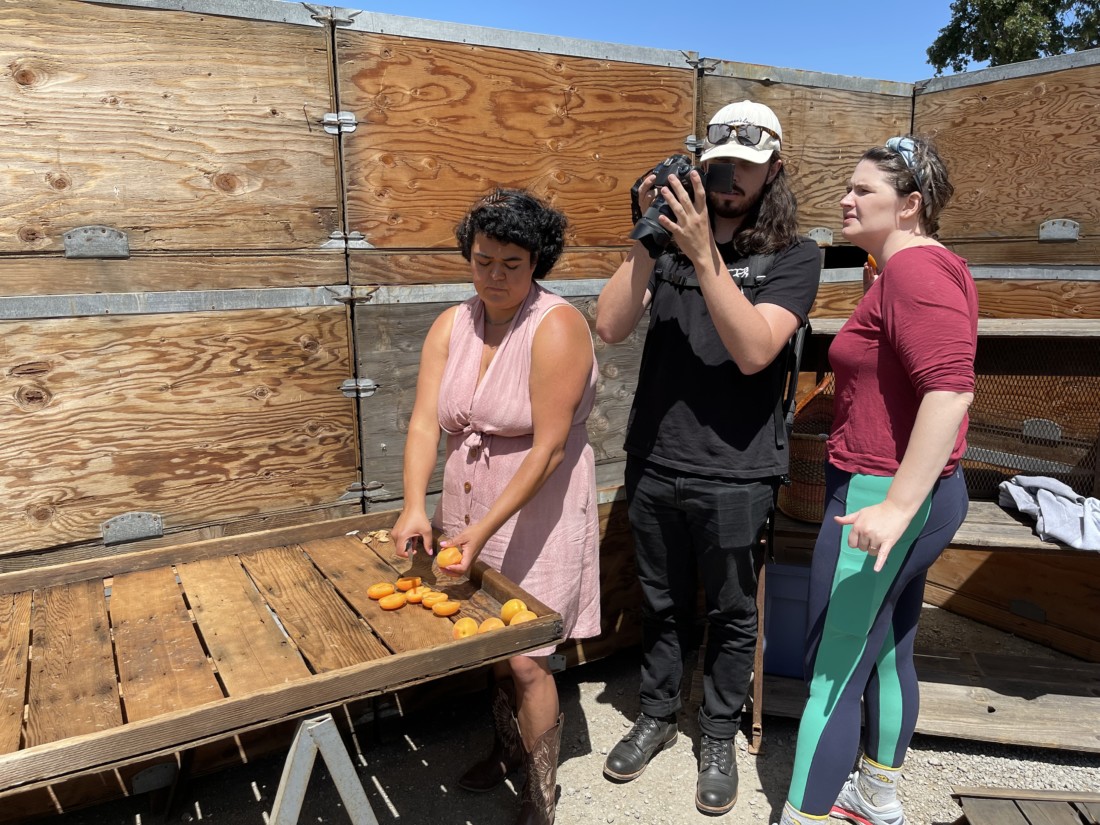 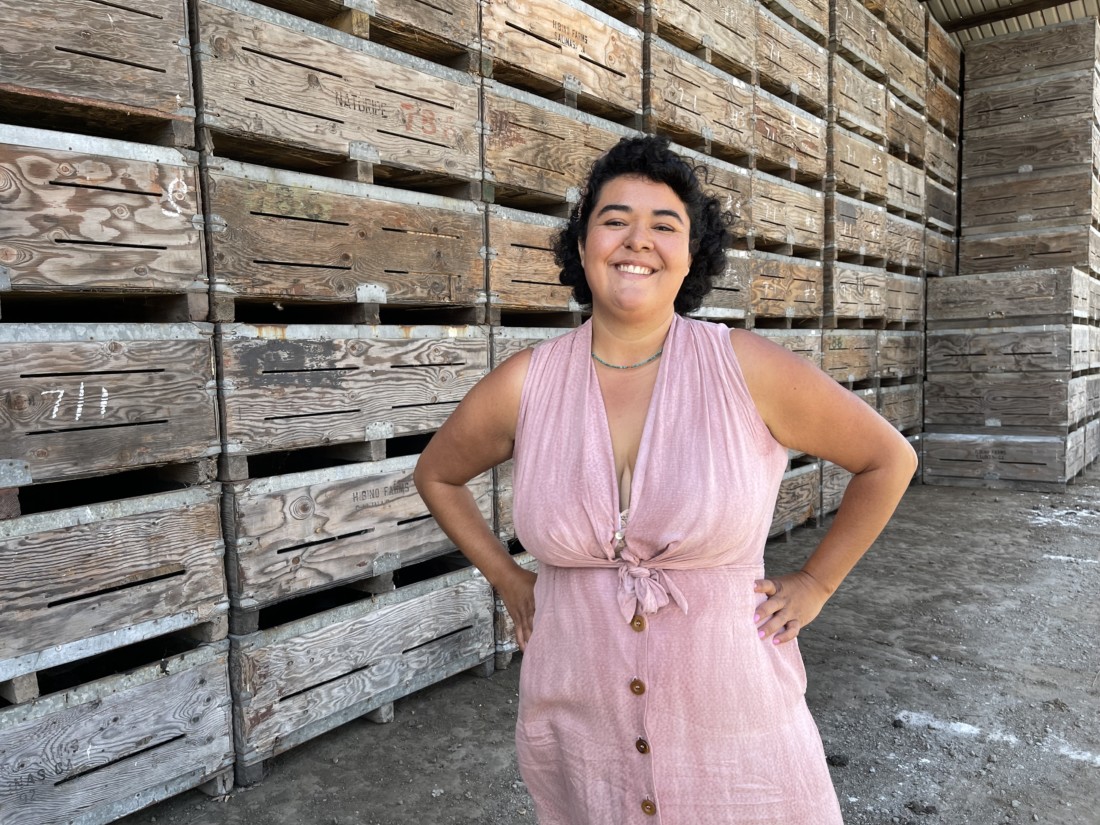 Rachelle Escamilla, dressed in work clothes, stood at a table at B&R Farms doing something she has done thousands of times before: pitting and cutting a ripe apricot to be processed or dried. It was a piece of her childhood being captured on film for an adaptation of her 2015 book of poetry, “Imaginary Animal,” a recasting of a project delayed by the pandemic.

“We were supposed to be launching an off-broadway version of my first book,” said the Hollister-born poet. “But then COVID hit and all the theaters shut down. So over the course of the year, I worked with my director, Katherine Wilkinson, to produce a film version. We would send videos back and forth over Instagram, trying to envision a film version of what we thought the theater version would be like.”

Escamilla had hoped that a film version would follow the theater production, but the necessities of social distancing restrictions forced a smaller project, one that she could complete with just Wilkinson, along with videographer Nicolas Albrektsen, and work in isolated locations.

Escamilla and Wilkinson met at the Philip Glass Days and Nights Festival two years ago and instantly bonded.

“I thought to myself, ‘Wow, this person is amazing,’” said Wilkinson. “I read her poetry and it struck me as incredibly expansive and physical. It is meant to be performed. We can’t do the play but we can create a short film that will be played behind her while she is reading her work.”

Imaginary Animal’s theme of farm and field labor is drawn from Escamilla’s heritage as a descendent of San Benito County campesinos (farmworkers).

While her academic life has taken her from San Jose State University, where she founded the Poets and Writers Coalition, to the University of Pittsburgh, where she earned her masters of fine arts degree, to China, where she taught at the English Language Center for Creative Writing at Sun Yat-sen University, she has returned to Hollister to bring authenticity to her film.

“My history here is long and deep—I worked the apricot orchards here,” Escamilla said. “My family worked the different fields here and lived in the low-income housing on Southside road. My grandfather traveled to Congress to testify about labor and health injustices happening in San Benito County. He was instrumental in getting the Health Foundation started in 1969. So I have a history of storytelling and activism behind me and that is where the film is coming from.”

The filming at B&R Ranch was one of many stops in the area, on a busy shooting schedule with a goal of completing enough footage to use at Escamilla’s poetry exhibition on June 24 at the Santa Cruz Museum of Art & History.

“We are tracing all the places that influenced her poetry and have created the landscape of her work,” Wilkinson said. “We are shooting all the different relationships to her matriarchs and loved ones, to build something that people, while they are listening to her poetry, can get to know her and get to know this town.”

Noting that the neighborhood she grew up in has been replaced by a 500-home development, Escamilla says it’s important to her to capture the qualities of the town she grew up in, which she sees as rapidly disappearing.

“San Benito County is a beautiful place and it is often overlooked,” Escamilla said. “But the way California is moving, gentrification is happening very quickly all around us. I remember Hollister when it just had one stoplight. For me, this film reminds me of other work done around this area like ‘La Bamba.’ Growing up here, I knew the work of Luis Valdez. I just want to follow that.”

Work on the film will continue past the June 24 poetry exhibition with the goal of creating a full-length film to be shown independently of a possible stage production.

“We have both had to pivot in our fields,” Escamilla said. “This is a risky pivot in a new direction and we are both very excited. I think this is the beginning of something larger. I feel my world and art are about to change. But I don’t ever want to forget where I came from: a family of farmworkers who stopped in San Benito County because here they could work 10 months out of the year.”

A poem from “Imaginary Animal” by Rachelle Escamilla:

You can hear Escamilla read her poetry from Imaginary Animal here:  https://m.soundcloud.com/rachelle-escamilla/imaginary-animal-test-recording 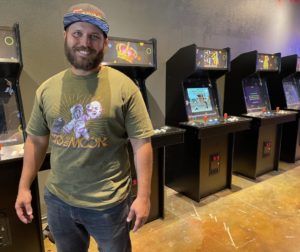 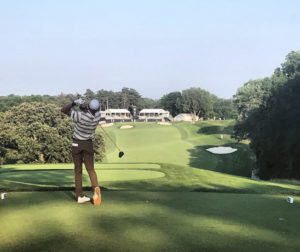 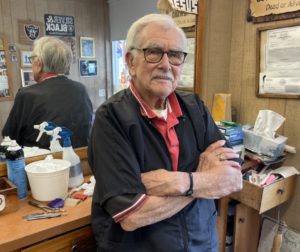