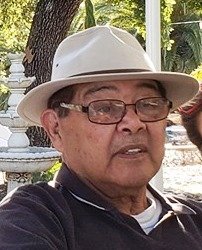 Ernest H. Alnas was born on February 26, 1937 and passed peacefully on December 16, 2019, following a short illness. He served in the Navy during the Korean War and was always proud of his service. He was a long-time resident of San Juan Bautista and an active member of the community. He was an active member of the Veterans of Foreign Wars and Mission San Juan Bautista. He volunteered in the community as a Little League Coach and for school sporting activities and was known for always opening the community center for basketball to keep the local kids off the streets. He was a welder by trade and retired from Kaiser Permanente Cement where he worked for more than three decades. He will be remembered for his gentle spirit and kind heart and youthful smile. He is one of nine siblings of John and Ramona Alnas of San Juan Bautista. He is proceeded in death by his wife Ruth Alnas and daughter Jeanne Martin. He is survived by his children, Eddie Bowman, Debbie, Ernie and Todd Alnas. He is also survived by twenty-seven grandchildren, great-grandchildren and great-great-grandchildren. Visitation will be on Friday, December 27 from 1:00 p.m. to 8:00 p.m. with the recitation of the Rosary at 6:00 p.m. On Saturday, December 28, family and friends will meet at Mission San Juan Bautista at noon for a Mass of the Resurrection. Interment will follow at San Juan District Cemetery.