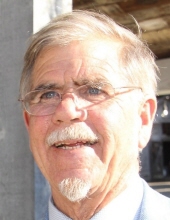 Jim Ryan, a long time resident of Hollister, passed away peacefully at home after a short battle with cancer.

The youngest of five, Jim was born and raised in San Francisco. He realized early on that he had a passion for working the land after harvesting early Gallo vineyards in Napa Valley as a teenager. After studying at Cal Poly, he made his way to Cienega Valley in 1979 to work as the Mount Harlan vineyard manager for Calera Wine Co., where he stayed until his retirement in 2017.

Jim loved his home and his community. He was well-known for his smile, bright eyes, dry wit, and welcoming heart. He enjoyed travelling, Monday Night Football parties, and anything involving chainsaws or tractors.

Jim was a loving father to his three daughters, Deirdre, Megan, and Fiona, as well as a doting “Papa” to James, Everly and Reese. Family and friends were the world to Jim and he will be greatly missed.

There is no formal service planned at this time. The family will organize a formal event once COVID-restrictions are lifted. In the meantime, small gatherings are being planned by various members of the community to honor his memory.