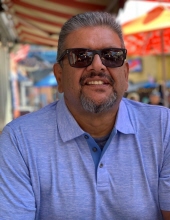 Victor A. Torrez passed away on January 5, 2021 in Hollister at the age of 58. Victor Torrez came to San Benito county from San Jose in 1994.
Victor Torrez married Christine Torrez on September 5, 1992 in Reno Nevada. He is survived by his children David Arenas, Cassandra and Zachary Leyva; his sisters Cindy Salas, Chris and Tim. His father Cruz; his grandchildren Dominic Arenas, Jared Arenas, Weston Arenas, Olivia Leyva and Rhett Leyva.

He is preceded in death by his mother Dora Torrez, his brothers David and Michael Torrez.

He went to Overfelt High School in San Jose.

He loved riding his Harley motorcycle, playing with his grandchildren/ children. He loved playing poker online. He loved to BBQ with his wife, going to Raider games, and going to church.

Private cremation will be followed by private family inurnment. A full obituary will be forthcoming.