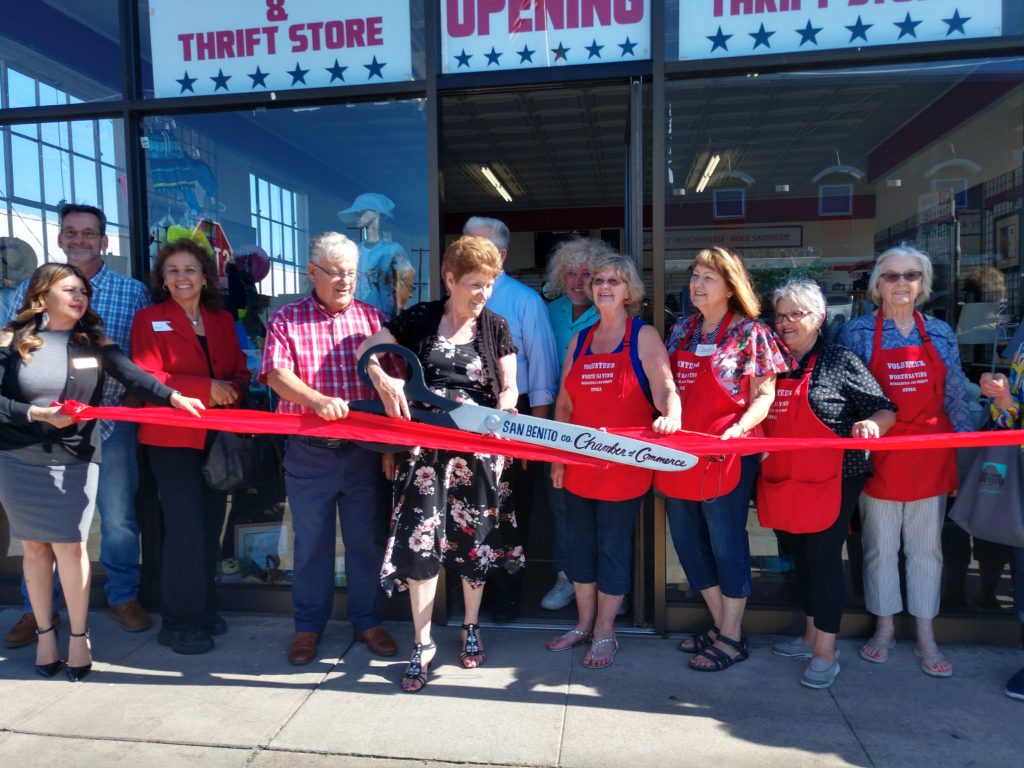 Linda and Pat Lampe cutting the ribbon in front of Worth Saving Thrift Store. Photo by Carmel de Bertaut.

Worth Saving is located at 101 Fifth Street in Hollister. Photo by Carmel de Bertaut.
×

Celebrating its first year of operation, the Worth Saving Thrift Store at 101 Fifth Street in Hollister had its grand opening in the early evening of July 10. The San Benito County Chamber of Commerce led the ribbon cutting.

The store is run by Pastor Linda Lampe of True Life Christians and her husband Pat, who also operate My Father’s House, a daytime shelter for the homeless population. The store caters to low-income residents and revenue supports My Father’s House.

Lampe’s goal is not only to provide shelter for the homeless, but to change how the homeless see themselves and how the homed population sees them. She referred to My Father’s House as a launch pad, not a homeless shelter, and said they have helped over 170 people find permanent housing. She said our homeless neighbors are someone’s sons and daughters. She wants them to know that they are “worth saving.”

In her statement after cutting the ribbon, Lampe said she opened the thrift store to help run My Father’s House because there are so many people to feed and clothe.

“My heart cannot say no,” she said.

Lampe said she aims to reach San Benito County residents who need help furnishing their homes or purchasing clothes for job interviews and work. She also wants to attract those who like to get a bargain, who like to buy used and who like to help others.

Gary Cameron, a retired California Highway Patrol officer, said he serves on the True Life board because it is an opportunity to help poor people in the community. “It is great to help people,” he said.

Worth Saving is in the process of being certified as a San Benito County green business. Lampe believes buying used goods is environmentally sound. She said very little of the waste or unwanted products from the store goes to the landfill. She ships items that do not sell overseas to be used or broken down.

Lampe plans to have an all new inventory by early August, and to do so there will be a sale of all current inventory as of July 12. Clothing, furniture, cookware, artwork and much more are available.

Worth Saving is open Monday through Friday from 10 a.m. to 4 p.m. Lampe is looking for volunteers in order to extend the evening hours and operate on weekends. To volunteer, call (831) 801-7775.