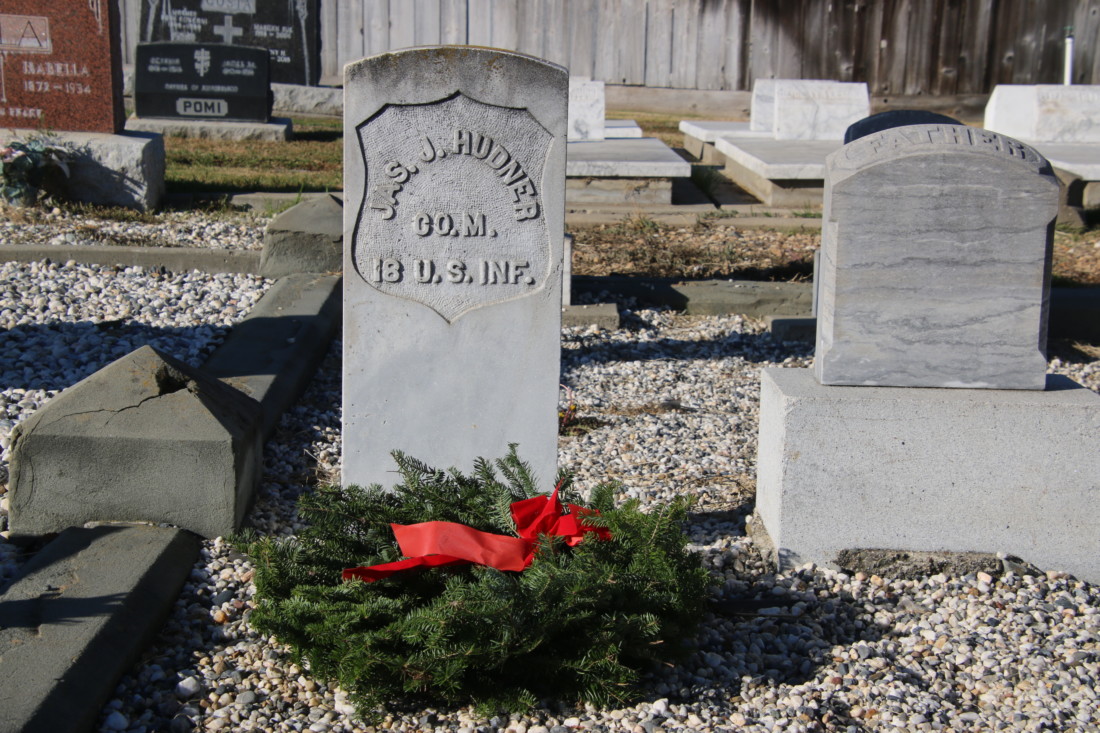 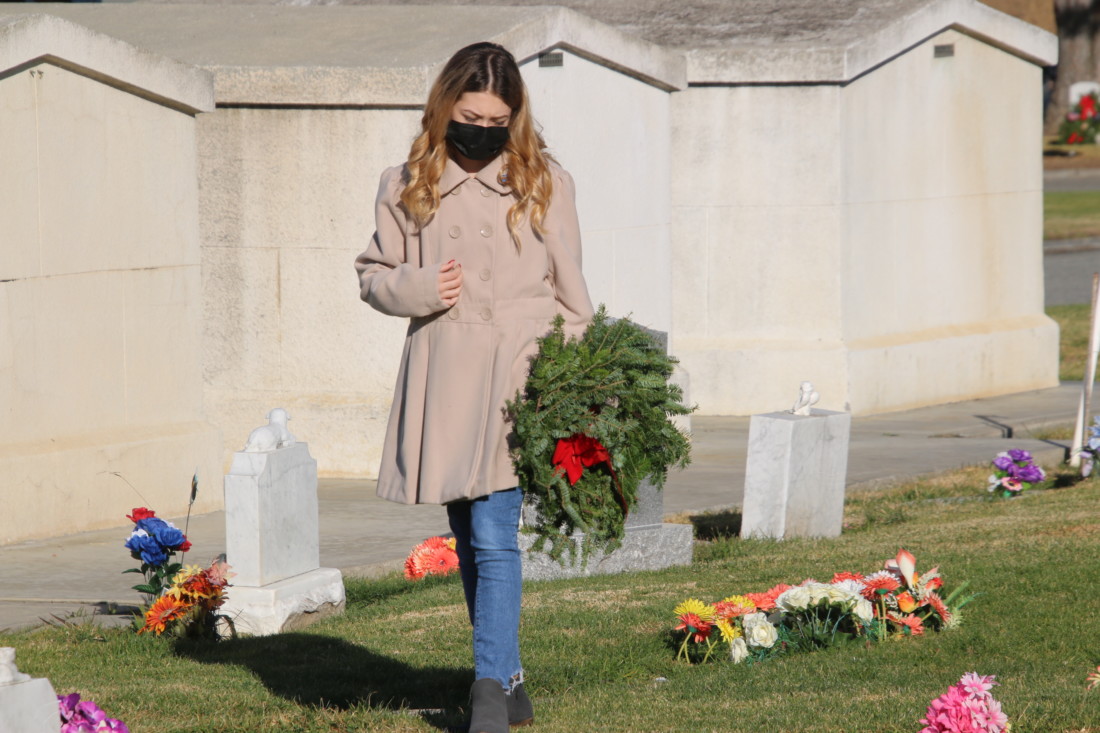 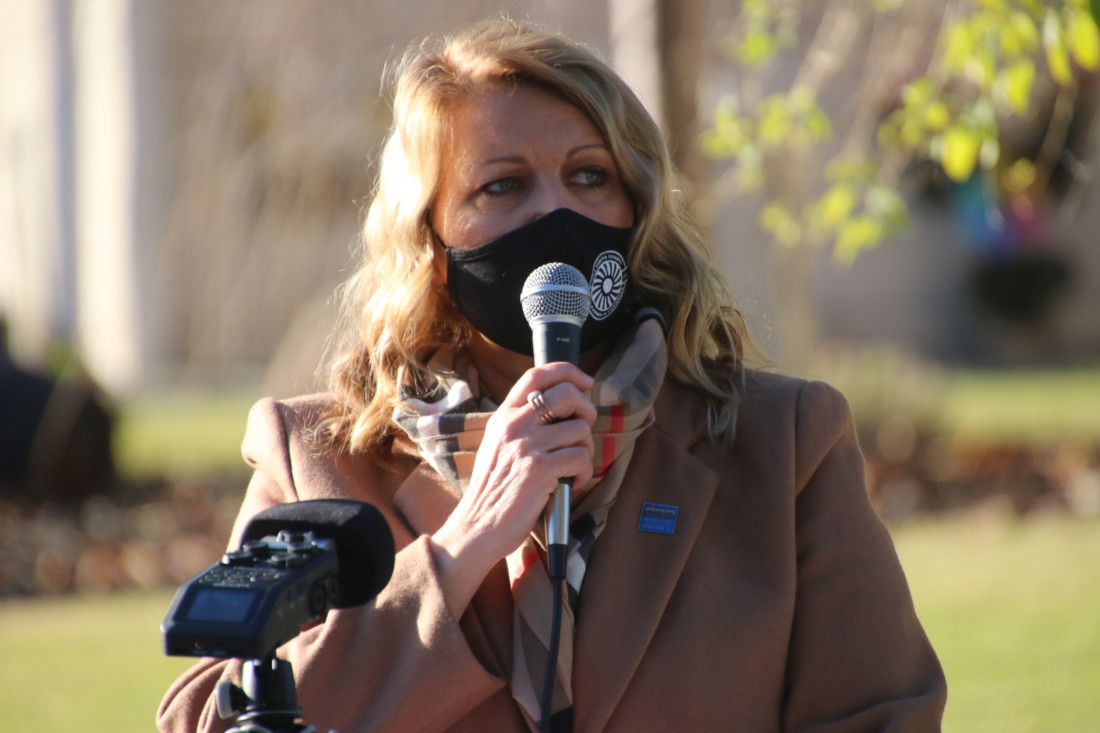 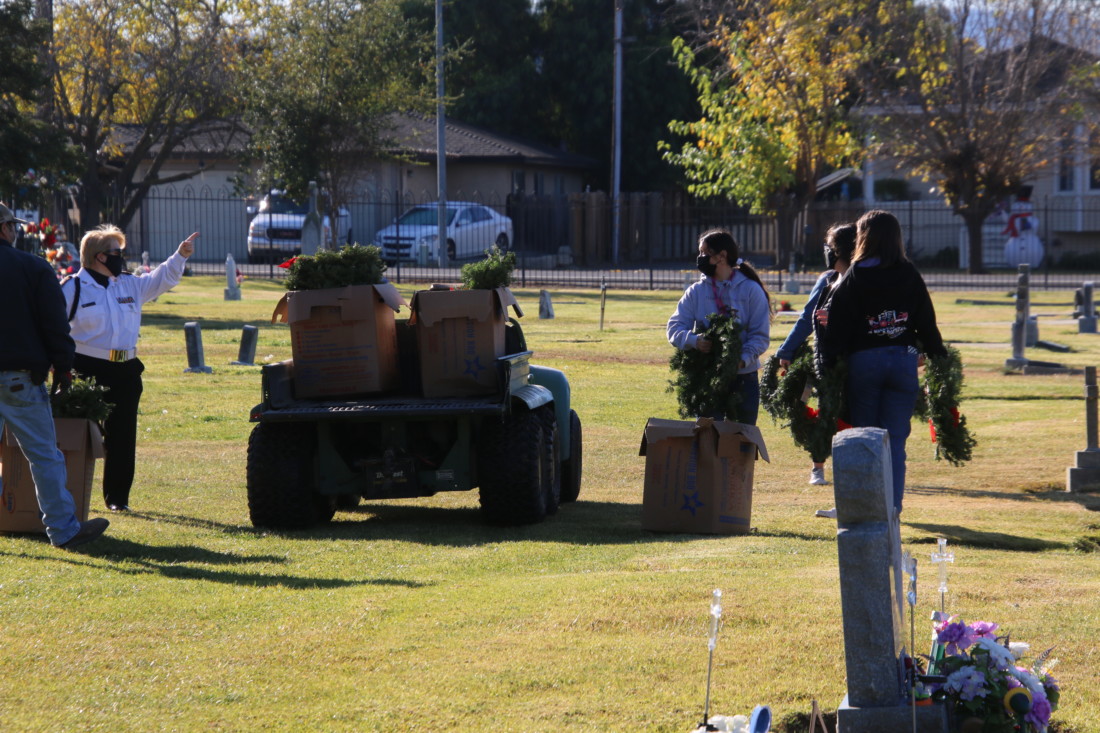 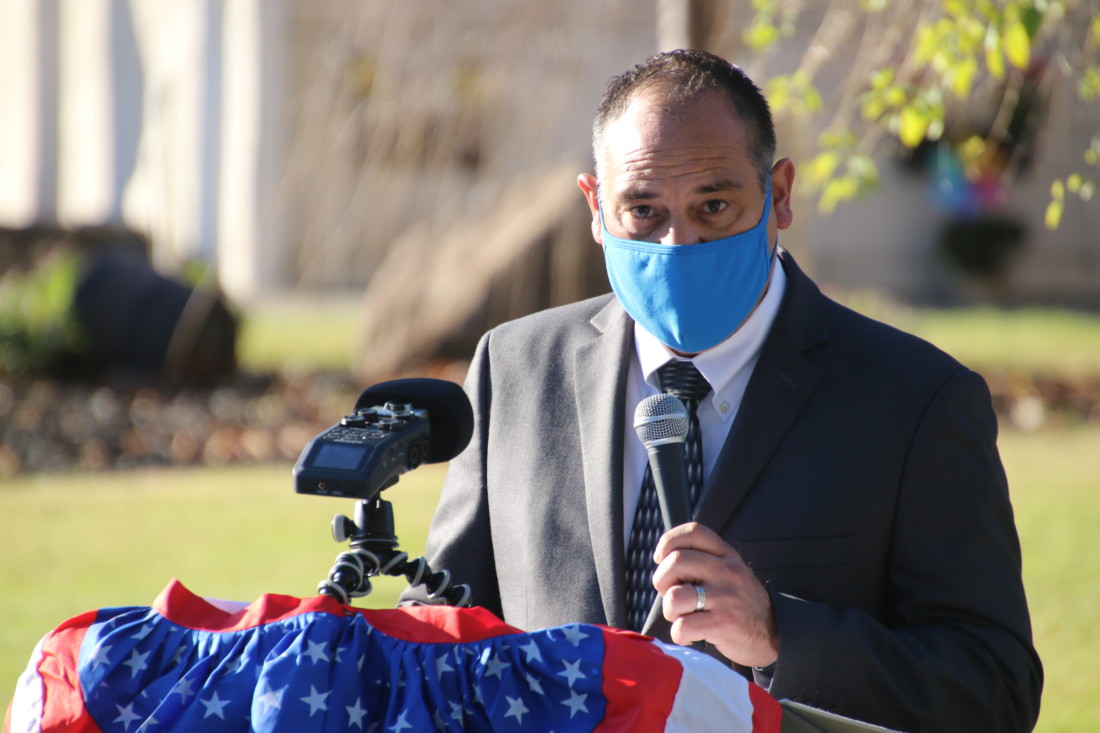 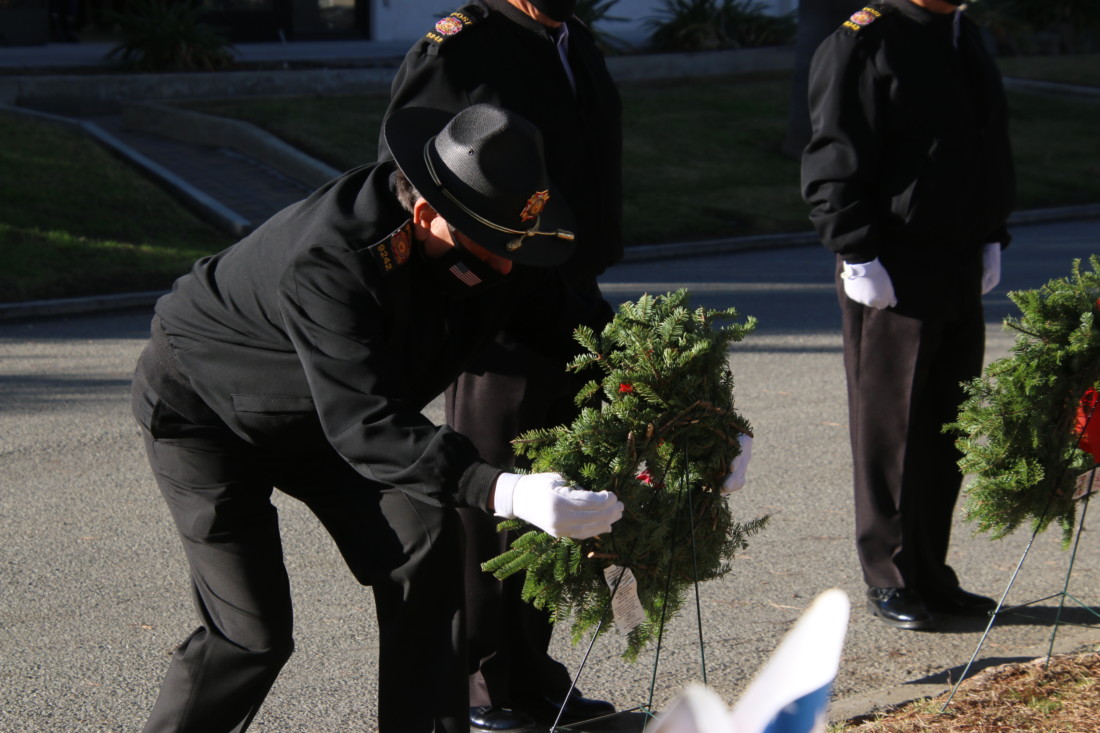 The annual tradition that began in 1992 to honor America’s fallen veterans through Wreaths Across America took on a whole new look this year as stay-at-home orders forced those who came to honor the hundreds of thousands of veterans interred in Arlington National Cemetery and 2,100 other cemeteries across the nation to practice social distancing.

It was the same in Hollister on Dec. 19 as an honor guard from Veterans of Foreign Wars Post 9242 was joined by volunteers to place wreaths on the headstones of veterans from Vietnam to the Civil War in the city’s two cemeteries: Calvary Sacred Heart Cemetery on Hillcrest Street, and Odd Fellows Cemetery on Buena Vista Road.

San Juan Bautista Cemetery is not registered with Wreaths Across America, so it was not included in the event. But Jennifer Rodriguez, director of tourism and hospitality with the San Benito County Chamber of Commerce, said it’s still possible each year to buy a wreath and take it to wherever a veteran is buried.

Because of stay-at-home orders, each community had to decide to either cancel its event, postpone or modify it.

“This year we had to pivot the whole ceremony,” Rodriguez said, adding that the event was live streamed on the county’s website. “We are having a private ceremony with only 10 individuals, eight of whom are military veterans who represent each branch of service.”

Also represented with a wreath were the more than 81,900 still considered missing in action from World War II to today.

According to Rodriguez, the chamber sold 657 wreaths at $15 each, which she said was an incredible effort because the organizations only had three weeks to do so, given the uncertainty with COVID-19 restrictions.

“With the outpouring of support from our community we decided to go ahead because it was important for us to honor our veterans,” she said, adding that donations came from local individuals, corporations, Gold Star Families (those with a son or daughter who died in the line of duty), and from across the country. “This year we have enough wreaths for all the veterans. As people learn about it, we’re getting more support, and each year it’s getting bigger.”

The local ceremony was particularly poignant for two members of the VFW honor guard, past post commander Bernie Ramirez and George Nava, current commander. Both were in the Army and served in Vietnam. Both knew local boys who died there. Nava said he grew up with two and went to San Benito High School with them.

“There was Gerald Joseph, who was younger than me, and Albert Gonzalez,” he said. “Gerald was in the class of 1970. His brother and I graduated together. Albert came to me before he went to Vietnam to find out how I came home. I told him it was God’s choice to let me come back home. When he went over there, he was killed within the first month.”

Mickie Luna, a former Hollister City Council member, came to the ceremony with her husband Vince to lay a wreath in honor of her brother, Ben Solorio, who came from Mexico, became a U.S. citizen, and served in the Army during World War II from 1945-47, seeing action at Iwo Jima.

Rodriguez said the majority of veterans buried in San Benito County is at Calvary Sacred Heart Cemetery. Most are located toward the back of the cemetery where they share the stark white government-issued headstones that identify them as 20th-Century veterans; some are with their spouses. Each had his or her own wreath.

But there are others scattered throughout the cemetery who volunteers had to search for because they were not necessarily buried as veterans. Some were in family plots, while others were isolated among strangers. Many could be identified by a cross in a circle on their headstones.

Five graves that stood out belonged to the O’Donnells, a family of veterans, all lined up as if in formation. Each had their own wreath. There was another O’Donnell, named Thomas, a few yards away from the others, who served during World War II. No telling, though, if he was related.

One of the oldest veterans buried in the cemetery is J. Hudner. His headstone states he served in the U.S. Army’s Company M, 18th Infantry, which formed during the Civil War. There’s no date on Hudner’s headstone, and cemetery staff couldn’t find a record of his burial, so even though it’s possible he did serve during the Civil War, there’s no way to be certain. He’s been there a long while, though.

However, there is another Hudner named Charles, not far away from the other grave. This Hudner was a major in the Army Air Force and served in World War II. He died Aug. 2, 1969.

One of the newest veterans interred at Calvary is U.S. Marine Private First Class John Anthony Giudici, who fought in World War II, and died July 25, 2018. Along with him is his wife, Norma, who passed Aug. 20.

No matter the war, no matter how or when they died, they now lay side-by-side or alone, veterans all. 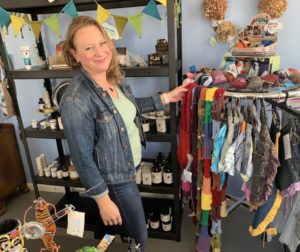 The many careers of Cara “Gum Beat Ya” Denny, the Roller Derby Queen 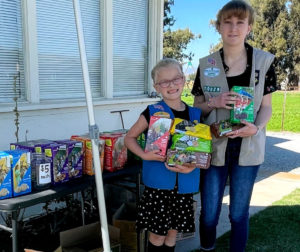 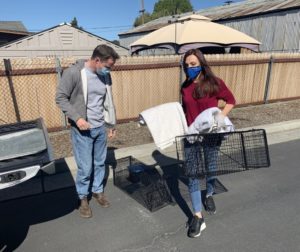