Along with the aromas of pastries and freshly brewed coffee, the air in the coffeehouse was filled with contagious beats and tongue-tying lyrics. 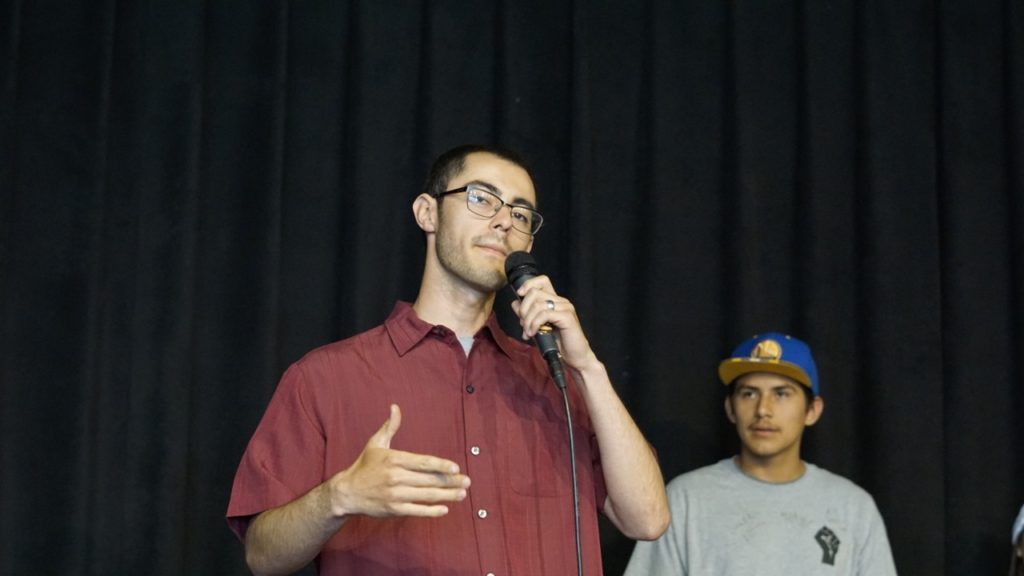 Last month’s Friday the 13th was anything but bad luck when Youth Alliance and Mars Hill Coffeehouse in Hollister joined forces for their open mic night.

The stage was set, the lights were drawn, and the seven Youth Alliance representatives captured the audience’s attention with original hip-hop songs and poems.

The performers expressed personal feelings—some did so over beats—spanning an array of topics such as mental health, immigration, education, war and identity.

Cassidy Guerrero, known onstage as 1 A.M., is a Gilroy native who has produced her own music and performed all throughout the San Francisco and the Monterey Bay areas for the last six years.

“I’m not after cheap thrills, I’m investin’ in forever. I know after every storm, there’s always better weather,” she sang during her performance of her original song, “Stay True.”

Although she just recently became acquainted with Youth Alliance in Hollister, Guerrero is passionate about community involvement in and around her hometown. Specifically, she sees the need for a new image of hip-hop to change the current stigma around it.

“In Gilroy, hip-hop isn’t seen in a good light, but I want to work towards changing that,” Guerrero said. “I think that hip-hop should not be looked down upon because it is just a way to express ourselves.”

Working closely with Youth Alliance, Guerrero is able to not only raise awareness on topics she is interested in, but to use her skills for the betterment of the community. According to Guerrero, Youth Alliance is currently planning a Q and A forum for local youth and candidates running in Hollister elections. Because Guerrero produces all of her own content, she teamed up with Youth Alliance to create the advertisement and registration form for the project.

Youth Alliance, the local nonprofit that provides resources and support for children and their families in underserved communities, aims to motivate youth to pursue their academic and artistic passions.

“Essentially what we do is work to dismantle the school-to-prison pipeline,” said Jeannette Neal, a Youth Alliance staff member present at the Open Mic Night event.

Youth Alliance will host another open mic night on Aug. 11 at the Appleton Grill at 410 Rodriguez St., Watsonville.

For more information about Youth Alliance visit the organization's website or call (831) 636-2853.

Photographer Elliot Ruiz captured images from the event. Ruiz is participating in BenitoLink's Junior Journalism Project, which is partially funded by a grant from United Way of San Benito County.