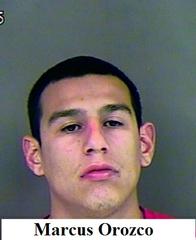 Two males were arrested by Hollister Police after attempting to rob the Quik Stop market at 1300 San Juan Road on Thursday, Jan. 22 at approximately 9:45 p.m..

Ramiro Ramos, 20, who police say was wearing a shirt wrapped around his face and grabbing at his waistband as if concealing a firearm, entered the Quik Stop and demanded the clerk give him money and lottery tickets. The clerk said she didn’t have any money and quickly called 9-1-1. Ramos ran out of the store without any money and got into a gold, two-door sedan allegedly driven by Marcus Alex Orozco, 22. The two men fled in the vehicle.

Officer William Hutchison, who was on routine patrol, heard the radio broadcast of the suspects’ vehicle, saw a car matching the suspect vehicle description near the intersection of Fourth and San Benito streets, and stopped the car on San Benito Street near South Street. With the assistance of Gang Officer Matthew Weiss, they detained Ramos and Orozco. Video evidence from the store confirmed Ramos as the suspect who tried to rob the store, police said.

Ramos and Orozco were booked into the San Benito County Jail on charges of attempted robbery and conspiracy.

Anyone having information on this case or any other pending investigation is asked to call the Hollister Police Department at 636-4330. Persons wishing to remain anonymous can call the WeTip Hotline at 800-87-CRIME. Information provided to WeTip may qualify for a reward.