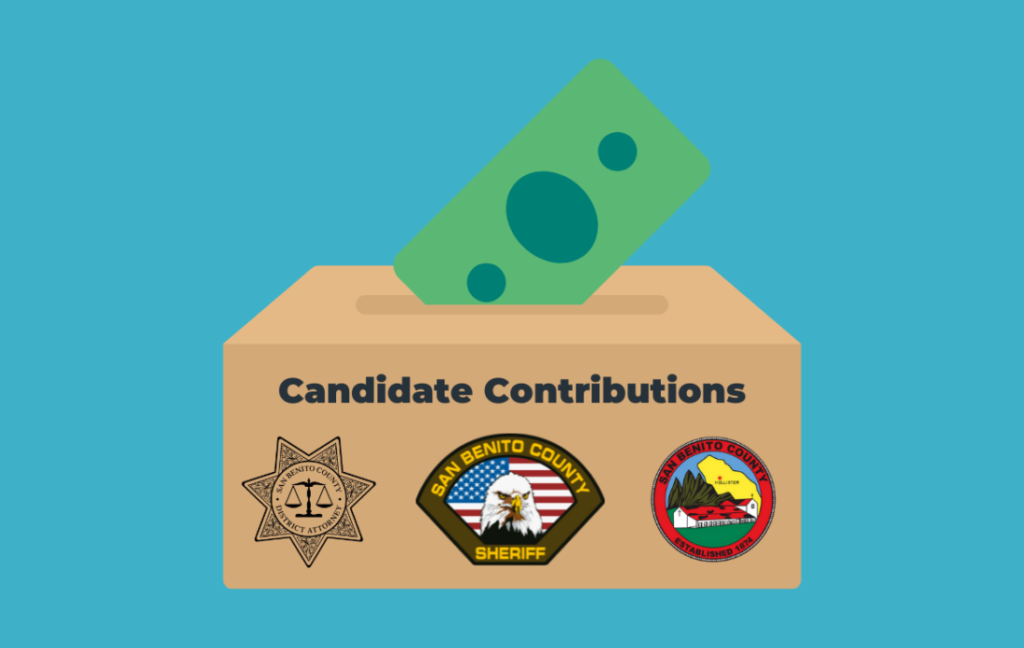 Candidates for local office have reported over $100,000 in campaign contributions during the period of Jan. 1 to April 23. Below is a breakdown from the San Benito County Election Department’s website. Total donation amount includes those reported after the April 23 period.

Beginning with the June 7 primary election, the largest sum an individual can donate to a candidate is $4,900.The deadline to report was April 29 and the penalty for reporting late is $10 per day.

Incumbent Eric Taylor reported a total of $23,043. Taylor received $3,300 from local companies including $500 from San Benito Sheet Metal Inc. and RJR Recycling, both owned by Robert Rodriguez, Black-Cooper-Sander Funeral Home, Greenwood Ford, and $1,000 from K&S Market Inc which is owned by the Klauer family (Karson Klauer served in the Hollister City Council). He also reported a $1,500 contribution after April 29 from the San Benito County Deputy Sheriff’s Association.

Challenger Joel Buckingham reported a total of $22,500. He contributed $800 in self-funding. Richard Buckingham and Lynne Buckingham of Walnut Creek each donated $4,900. Other $4,900 donors include Kathy Dassel of San Juan Bautista and John Gibson, a retired Washington superior court judge.

Incumbent Candice Hooper Mancino reported a total of $19,475. She received a $4,500 individual donation from Phyliss Hooper of Hollister and two $1,000 donations from Christin-T M Hooper of Michigan, and Salvadore and Rebecca Rubino of Hollister. K & S Market donated $1,000 and the San Benito County Deputy Sheriff’s Association donated $1,500. Hooper Mancino reported $6,200 after April 29 including $3,000 from Joseph Mancino and $3,200 from Killie Nino.

Challengers Elizabeth Zepeda Gonzalez and Sandra Patterson have no filing at this time.

Challenger Mark Starritt filed as having no contributions.

Eddie Alfaro has not filed at this time.

Elia Salinas reported $1,650 in contributions. She received $1,000 from Vincent Pryor of Hollister. (Salinas filed a handwritten report and BL made every effort to ensure correct spelling of names)