Additional doses are expected in the weeks ahead, but it’s unknown when they’ll be available to the public. 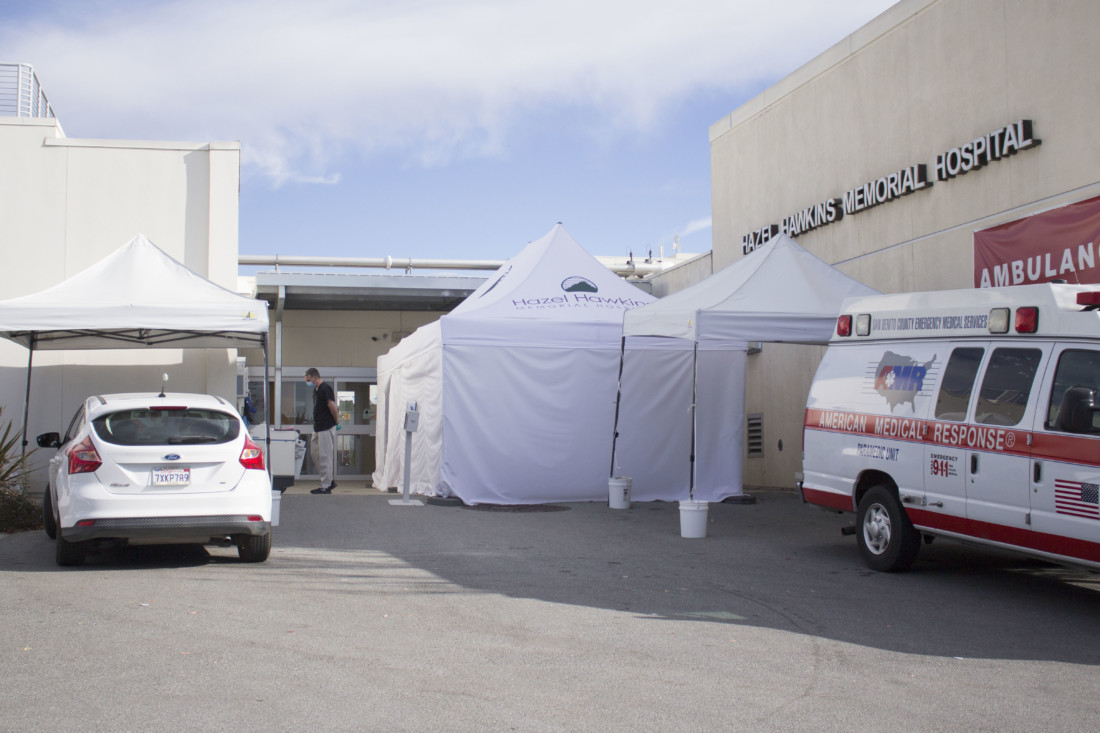 Hazel Hawkins Memorial Hospital has tents set up outside to service a higher amount of patients. Photo by Noe Magaña.
×

With a vaccine for COVID-19 making its way around the state, 230 doses are allocated to San Benito County for the first round of inoculations. That’s according to Lynn Mello, deputy director of Public Health Services, who made the announcement to the San Benito County Board of Supervisors on Dec. 15.

“The first round of doses is going to Hazel Hawkins Memorial Hospital for Tier 1 vaccinations,” she said. “Additional vaccine will be rolled out by the state in the weeks to come. It’s unknown, at this time, when the vaccine will be made available to the public.”

California is adopting a three-phase approach to vaccination, according to the state’s vaccination plan. The state will move through the phases as vaccine supply increases. All vaccine allocation decisions are expected to be data-driven, with an emphasis on equity and protecting California’s critical and vulnerable populations.

On Dec. 11, the Food and Drug Administration issued an emergency-use authorization for the Pfizer-BioNTech COVID-19 vaccine, according to the Centers for Disease Control and Prevention. On Dec. 13, trucks left the Pfizer plant in Portage, Michigan, headed for 636 predetermined locations to deliver an estimated 2.9 million doses in the first week.

Mello said the hospital is ready to receive the vaccine and is working closely with its health care partners to keep supervisors and the community apprised as more information becomes available.

Supervisor Jaime De La Cruz asked if the county would comply with the federal regulations concerning who receives the vaccine during the first round of inoculations. Mello said a tiered system determines who will receive the vaccine and in what order.

According to CDC and state guidelines, Mello said Tier 1 includes acute care and critical care staff, then nursing facility care staff as well as the patients, followed by paramedics and dialysis center staff. The last is of interest to De La Cruz, who is diabetic and underwent dialysis for years.

“My doctor told me I was going to be in Tier 1, but somehow they moved me out of it because I’m not using a dialysis machine as of today,” De La Cruz said.

Supervisor Mark Medina asked about the expense of testing at the hospital. Steven Hannah, CEO of Hazel Hawkins, said there is no cost to hospital employees, but patients will pay $100. Medina wondered if there was some way the county could cover the cost. County Administrative Officer Ray Espinosa told Medina that the county has used CARES Act funds to pay for some testing programs. He said San Benito County could look at ways to pay for testing beyond the CARES Act in January and February.

Supervisor Peter Hernandez said he had been told that people who go to the hospital emergency room and are tested for COVID-19 expecting the test to be inexpensive or free are being billed upwards of $1,000. Hannah said if someone comes through the ER they will be triaged, which results in a cost above that for the test.

“Because of the rules we operate under, that’s a requirement,” he said, adding that he understood the concern. “If there’s anything we can do to mitigate that, we’re willing to do it.”