photo of moment before the assassination of JFK Column by Bob Reid on the assassination of President John Kennedy 50 years ago and our nation's response to it. 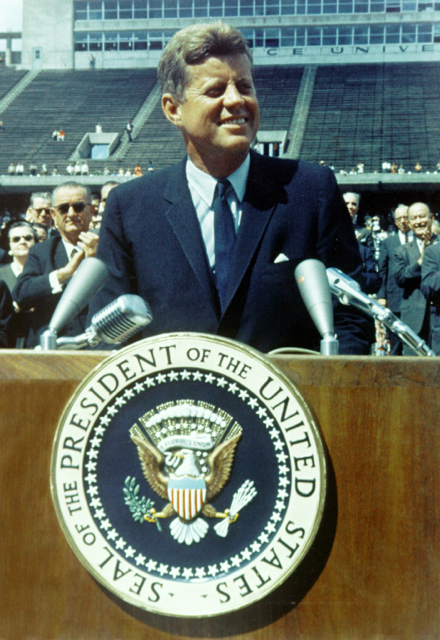 This is a very difficult day for me. I have hoped for, and dreaded this day, thinking that perhaps something will have changed in 50 years.  My nightmare continues.

50 years ago today, John Kennedy, the President of the United States was killed as he rode in a motorcade in Dallas, Texas. I had been 13 years old for a month. I was in my Woodshop class when the announcement came over the intercom that the president had been shot.

I had no idea how vast the change would be. The nation went into mourning and many have never come out of it. Not only did the president die, but I believe something in many of us died as well. The hope and promise which seemed to inspire and uplift many of us was pummeled. If this man was vulnerable, how vulnerable must we be?

These past 50 years I have been embarrassed at how my country has responded to the killing of John Kennedy. Even though a majority of the American public has had no faith in the  Warren Commission’s conclusions, we have done little to nothing about it. An act of terror which subdues us even now, those of us still alive to remember. Those who have been born since, have never experienced what we did.

It frightens me that the American public seems to no longer be capable of outrage. The economy can be ravaged and ransacked by financiers and banks, the value of peoples home vanished due to selfish speculation and no one is punished and we accept it and say, “Yep! That’s the way it is!” We have been taught to fear.

The Kennedy killing brings this into focus for me. We seem to not want to know what happened. We seem to not ask the basic questions which might lead to more questions. We are very simplistic about it.

"In actual fact it would seem that during the Cold War, if not during World War 2 this country has become frankly a warfare state built on affluence, a power structure in which the interests of big business, the obsessions of the military, and the phobias of political extremists both dominate and dictate our national policy. It also seems that the people of the country are by and large reduced to passivity, confusion, resentment, frustration, thoughtlessness and ignorance, so that they blindly follow any line that is unraveled for them by the mass media."- Thomas Merton Cold War Letters in 1961

How far have we come from those days?

At 17, Lee Oswald was a radar operator in Japan monitoring the U2 flights over the Soviet Union. He then chooses to defect to the Soviet Union and the Soviets are able to shoot down two of the U2 flights, Oswald comes back to the US with his Russian wife. Is he arrested as he re-enters the country, No! Have you ever wondered why?

What rifle was used to shoot Kennedy? Everyone knows it was an Italian-made Mannlicher-Carcano, right? When else would you have even heard the name? If you are at all curious, I urge you to take a look at just a minute of this documentary   There is much more information that you may find intriguing, but at 30 minutes into it, there is an interview with Roger Craig, a Dallas Sheriffs Deputy who was on duty in Dealy Plaza concerning the rifle found in the Texas Book Depository. I hope this will stir your curiosity. If not, I wish you sweet dreams in your reverie. Here is the link again if you missed it the first time and yet again! HERE!!! Go to 30 minutes in.

I have read many books on the assassination and am unsettled by most of them. Some seem a little silly, some seem to be deliberately spreading false information. Some I find enlightening.

When I look around and notice the quality of the discussion, or lack of discussion about what is conceivably one of the most important events in the past century, I wonder if anyone else is unsettled by it. Does it matter? I think it does!

I am embarrassed by my country and it’s willingness to turn away. When people talk about being proud to be an American, all I can say is “Oh, really?”

People seem to pride themselves in their ignorance and lack of curiosity about the assassination. They admit not having made an effort to inform themselves about what happened and then act as if they know exactly what happened. The security of ignorance! They accept someone else’s information as being true. It reminds me of a bumper sticker I saw once, something like ”Take control of what goes into your mind, or someone else will”.

Why are the files closed for another 25 years? I am embarrassed for my country. What does the rest of the world think of our lack of will to uncover the truth of what occurred on that day in Dallas?

I suspect the image we think we show to the rest of the world, and the reality of how they see us, are quite different.

Do we lack the will, courage, and curiosity to find the answers to what could be potentially game changing information? Does it matter? Would anything matter?

What do you think?

That’s what this part of the elephant looks like to this blind man!