33 firemen called in from Hollister, Aromas, and Monterey areas. 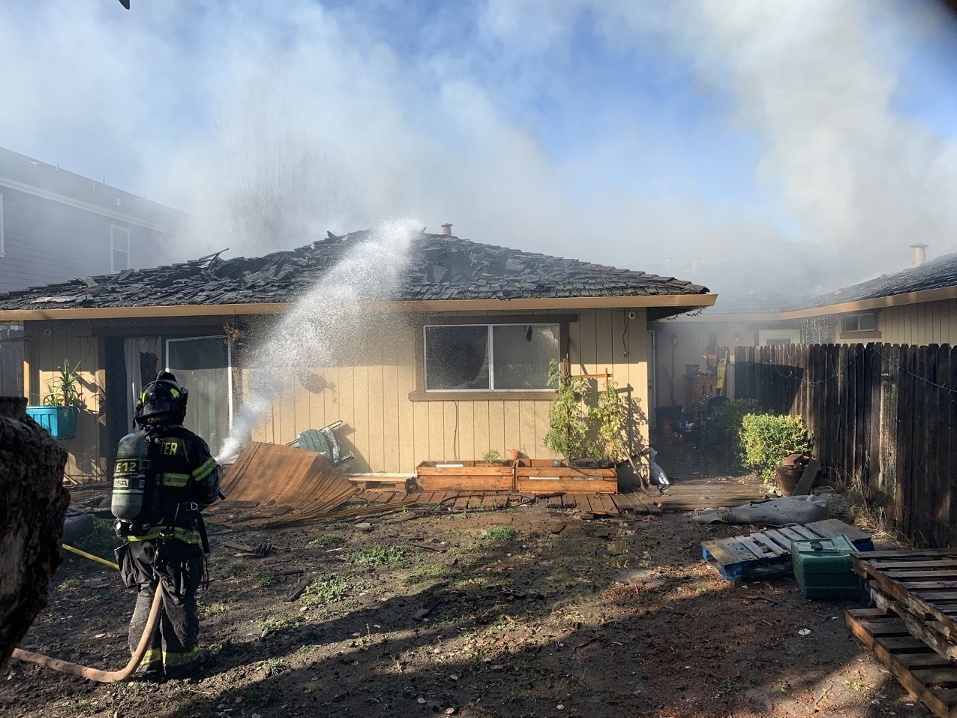 A fire that started in a chimney caused extensive damage to two homes and displaced seven people in San Juan Bautista on Dec. 7. Emergency vehicles from as far away as Monterey came in to fight the blaze.

Hollister Fire Chief Bob Martin Del Campo said the fire was reported around 11:30 a.m. by a resident of the home at 801 Marentis Court. The fire was contained by 12:30 p.m.

“We got a call of smoke and flames from the chimney area and roof in the area of the chimney,” Martin Del Campo said. “The resident had mentioned that there had been a fire in the fireplace the night before. It is undetermined what caused it, but a team will be coming out to do an investigation into the actual cause.”

In total, 33 firefighters responded to put the fire out, including Martin Del Campo, one battalion chief from Hollister and another from CalFire. Six fire engines deployed from Hollister, along with one engine from Aromas and two engines from Monterey County.

The biggest obstacle to fighting a fire like this one, according to Martin Del Campo, is the available water supply and staffing to keep the operation going.

“After a half-hour in that kind of environment, the troops need to pull out, rest, and get rehydrated,” Martin Del Campo said. “Once one company pulls back, another company can go in to continue the operation.”

For those displaced, firefighters will be working to salvage items from the house that the residents will need to sustain themselves. The American Red Cross has also been called in to provide temporary shelter and assistance.

Martin Del Campo stressed the importance of maintaining clean chimneys to avoid the chance of fire.

“An inspection and cleaning of the flue should be carried out every year,” he said. “The flue is usually around eight to 10 inches in diameter and there is going to be unburned combustible material that will cling to the wall of the flue if they are not cleaned out on a periodic basis. The heat from the burning particles can compromise the metal that makes up the flue and get into the attic and the walls. We have to be cognizant of that because back when some of these houses were built the fire code was much different.”