Closed to recreational use since 2008 due to a zebra mussel infestation, treatment plan on hold pending the results of a federal environmental review. 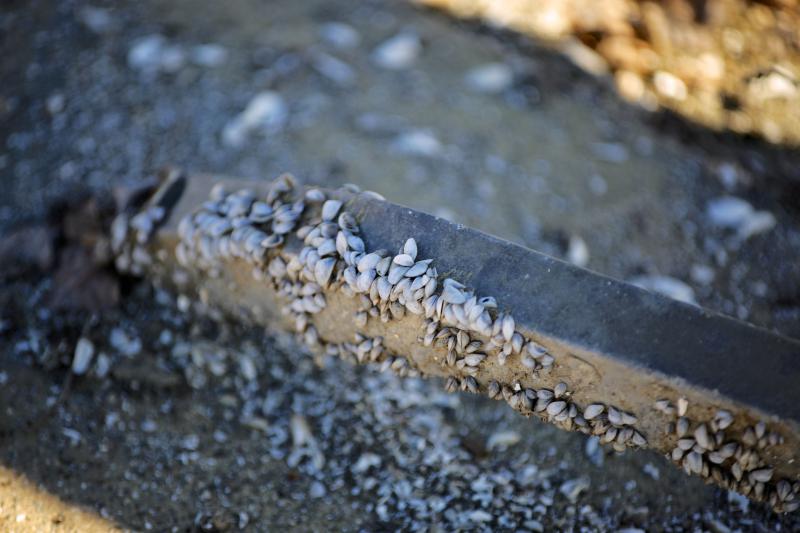 Seven years have passed since San Justo Reservoir on Union Road was closed to recreational use after invasive zebra mussels were discovered in January 2008, and despite a plan for their removal the future of the reservoir remains hazy.

The San Benito County Water District, which operates the reservoir, cannot proceed with the eradication plan until an environmental impact review is completed by the United States Reclamation Bureau, the federal agency that owns the facility.

“The basic plan is in place, but because it's a federal facility you have to go through the National Environmental Policy Act, so there's a NEPA action that needs to be taken,” said Jeff Cattaneo, district manager of the SBCWD. “The Bureau of Reclamation has to complete that NEPA work to give us the authority to go in. The bureau has been working on it for about the last two years. Until we get that clearance we can't even consider going out and doing anything.”

The plan is to use potassium chloride, commonly referred to as “potash,” to suffocate the mussels by interfering with their ability to breath.

Potassium chloride is extremely effective at killing mussels, and has no adverse side effects on the wildlife in the area, according to Cattaneo.

However, even if all the requirements have been met and the plan is given the go-ahead, there is the possibility that it won't rid the reservoir of all the mussels.

“There's no guarantee that it will work,” Cattaneo said. “It's only been tried in one other area. That was in a quarry back east, and it's a much different environment.”

In 2006, Millbrook Quarry in Virginia was cleared of its zebra mussel infestation by injecting 174,000 gallons of potassium chloride solution into the entire quarry over a 3-week period, according to the Virginia Department of Game and Inland Fisheries website.

“In a quarry you've got a real confined space, the walls are straight up and down,” Cattaneo said. “You don't have the rocks and the banks and other things that mussels can get into and get underneath. We're not really confident it's going to be 100 percent effective. Unless you kill every single mussel in that reservoir you'll just end up knocking the population back, and then they'll be back in there again. It only took two mussels to begin with to get to where we are today.”

Further complicating matters, because there is no guarantee the procedure will work the water district is reluctant to pick up the tab, which is believed to cost around $3 million dollars, according to Cattaneo.

“We're trying to get funding from the federal government to get appropriations to do it,” Cattaneo said. “We're not going to spend $3 million of our money unless we have a real strong assurance that it's going to be effective.”

The district has consulted with a number of firms and companies to come up with alternative strategies, but the use of potassium chloride is the only known method for eradication. Other methods focus more on controlling the mussel population.

The district already manages the mussels by periodically adjusting the water level of the reservoir in order to expose them to oxygen. Although it doesn't kill them all, it has proven to be a useful strategy in keeping their numbers down.

“In 2008, when we first found them, you could see all the way down to the bottom because it was so clear because the mussels filter the water,” said Dave Meraz, the operations manager for the district. “After we started dropping the reservoir and then bringing it back up, the water is more murky. So you can tell it's been helping.”

For the time being, the water district can do nothing more than monitor the mussel population in the reservoir while waiting for the Bureau of Reclamation to complete the environmental impact analysis. Once completed, the water district will still need to secure funding for the eradication plan. District officials were unable to say when the review will be completed.

“There's really nothing we can do about it,” Cattaneo said.

Despite the frustrations of having the popular boating and fishing reservoir closed to the public for an extended period of time, one of the positives is the fact that the district has been able to contain the infestation just to San Justo, according to Meraz.

“This is the only place for water activities for residents, and we understand how they feel, but who wants to take the risk of infecting San Luis?” Meraz said. “We've been fortunate that this hasn't transferred anywhere else.”