At a cost of nearly 9 million dollars, airport should be fully functional again by May 3 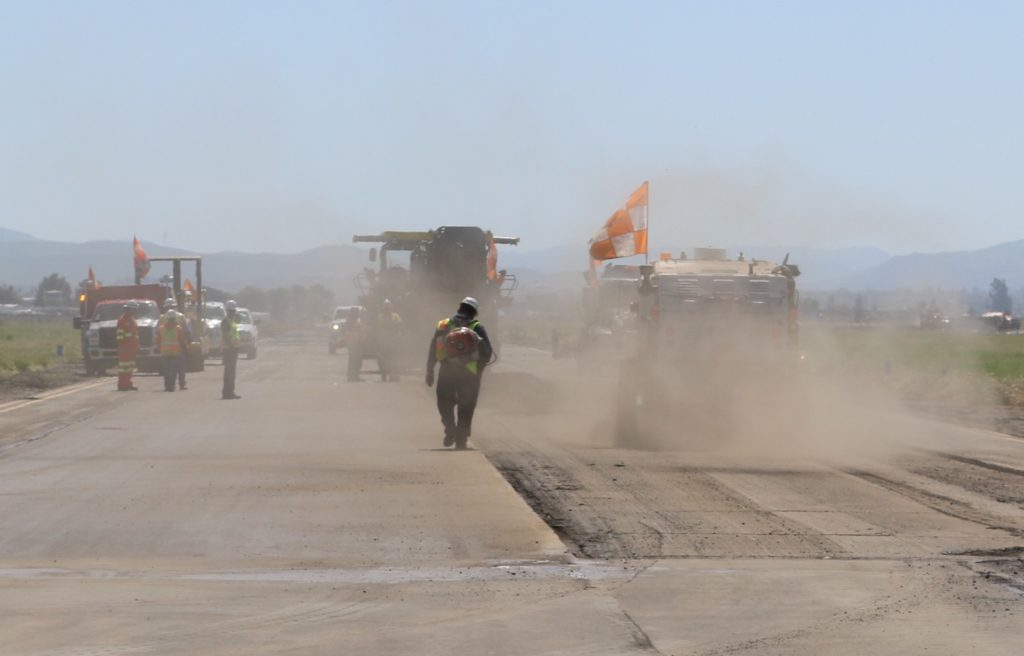 At a cost of nearly $9 million, funded through two government grants, repair work on Hollister Municipal Airport’s main runway is not only progressing on schedule, but the airport got a brand new four-mile perimeter road out of the deal, at no cost to the city, according to Mike Chambless, airport director.

“This is the third year of a three-year project,” Chambless said on April 1. “The first year was plans and environmental work. The second year was phase one, which goes down to the north end of the runway. We did a third of it. So far, we’re doing two-thirds of the runway.”

As of March 28, the airport was shut down for 21 days. Chambless estimated that runway operations should be back to normal by May 3. There will remain some electrical work to be done on lights along the runway. Private planes that are still located at the airport will have until April 4 to leave. He said most of the owners have made arrangements to keep their planes at other nearby airports during the timeframe.

As Chambless drove a BenitoLink reporter around the airport, he pointed out multiple construction sites. Near the south end of the airport, where Cal Fire aircraft are normally located (they’re temporarily in Sacramento), work was being done to reinforce concrete that, when tested, was found to be of insufficient strength.

“We have zones of soil that are unsuitable for operations,” he said. “Effectively, they (the U.S. Army during World War II) built the airport on a swamp. We’re mixing lime in the soil, which dries it out and sets it up like concrete; then (Graniterock is) bringing in 12 inches of sub-base that’s pact into 100 percent compaction; then they’ll bring in another type of rock called P209, and there will be another 12 to 18 inches of that. On top of that will be another five inches of asphalt, which is referred to as ‘super pavement, which contains an oil that protects it from UV light.’”

Chambless said that the runway far exceeds Caltrans' specifications for highways and roads. “This is FAA specifications,” he said. “This will last 20 years or longer.”

He said the work being done is not an upgrade in order to be able to handle bigger, heavier planes.

“There is no expansion of capability,” he said. “We’re putting back what was already there, but we’re doing it right. This section you’re on right now was built by the Army Corps of Engineers during World War II. And for whatever reason, the army built this airport, the navy built Watsonville, and when they were both done, they traded. So the navy was here and the army was in Watsonville.”

Chambless said the first section has only had minor repairs since being built in 1942, and has held up fairly well; while the second section was built in the 1990s, and is riddled with cracks, some of them substantial.

“There’s about eight inches of base,” he said as he pointed at a cutout section of the older runway. “It can’t support aircraft and it gets soft spots in it and the pavement will fail. Then I have to do a quick patch.” Then he pointed at the newer construction. “We’re bringing it up to today’s specs for our current aircraft.”

He reiterated that the construction was not expanding the airport’s capabilities.

“It’s always been rated for aircraft up to the size of a 737,” he said, and then joked, “You can land any size aircraft here—at least once.”

As part of the state and federal orders to correct the airport’s deficiencies eight years ago, there was also a requirement from the FAA and Caltrans, and possibly Homeland Security, to install a parameter fence around the entire airport.

“When we grind up existing asphalt we use it to put in the parameter, so we get two projects for the price of one,” Chambless said. “Graniterock was anxious to build the road at no cost to us because it would have been more expensive to them to haul it away.”

The original $3.1 million grant being used to fix the runway was announced Oct. 2014 by U.S. Congressman Sam Farr. Chambless said at the time that the money came mostly from aviation fuel taxes. To secure the grant, he said the airport had to chip in 10 percent from its own revenues, amounting to approximately $300,000, which helped secure the $3.1 million. This money was earmarked to replace the portion of runway built in the 1990s.

Chambless showed Benitolink on April 1 the many cracks in the runway, some averaging 2 to 4 inches deep. A second grant from the FAA for $5.8 million was secured in Sept. 2015, to be used to re-pave the remaining 6,250-foot main runway.