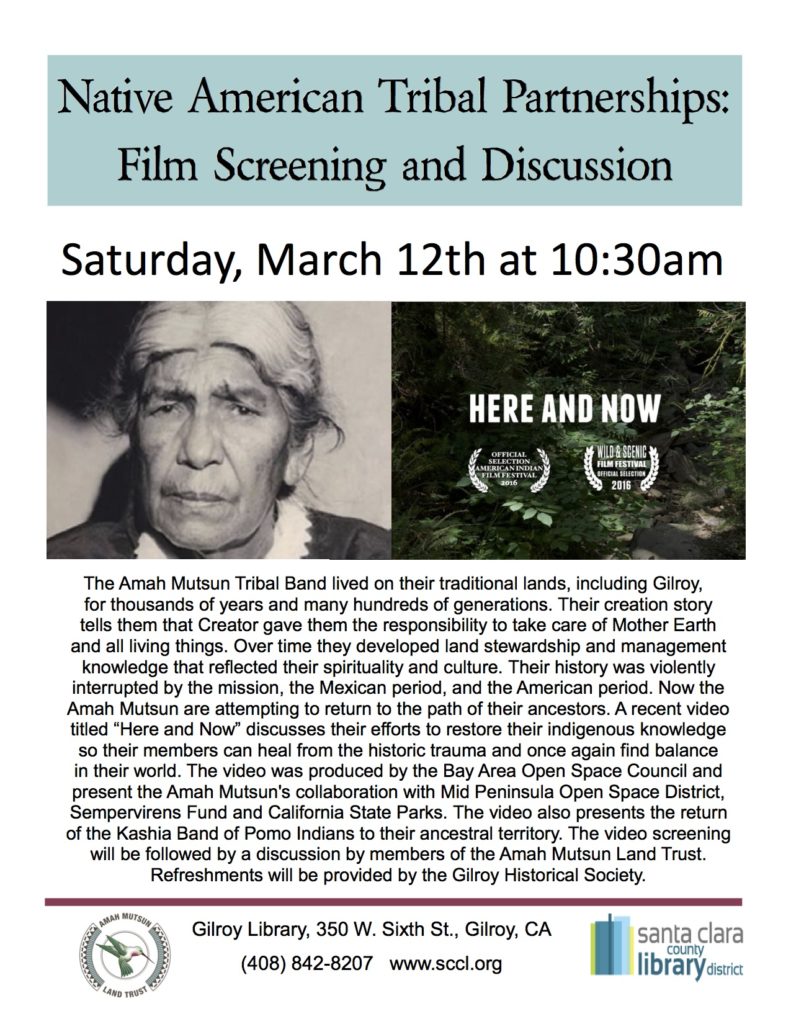 Flyer for the screening of "Here and Now." Courtesy of Bay Area Open Space Council. Reverence for the earth, stewardship, and sustainability are the guiding principles of the Amah Mutsun Tribal Band’s Land Trust (AMLT), according to the tribe’s website. Consequently, in recent years, the Amah Mutsun—descendants from the mission Indians of Missions San Juan Bautista and Santa Cruz—have forged partnerships with various government entities, conservation groups, and educational institutions within their traditional territory.

The tribe’s efforts are now part of an 18-minute film produced by Bay Area Open Space Council, "a unique network of nonprofits and public agencies that conserve, steward and connect people to the region’s world-class parks, trails, and working lands in the San Francisco Bay Area," according to the council's website.

"Our land trust has a strong focus on education. We want to teach land owners and the public on how to steward the land using traditional Mutsun land stewardship," wrote Amah Mutsun Tribal Chairman, Val Lopez, in an email to BenitoLink. He added that in the coming weeks a Mutsun garden will be planted in San Juan Bautista to introduce the public to the tribe's traditional plants and their uses.

Deputy Director of Open Space Council, Annie Burke, stated in an interview with BenitoLink that one of the film's goals was to include Native American "voices and stories."

"We can't talk about land in the United States without talking about the Native American presence," she said.

Burke noted that the film has been viewed over four thousand times on-line and has been screened at both museums and Native American conferences throughout the state.

The public is invited to attend the free screening of "Here and Now" on Saturday, March 12 at the Gilroy Library. The screening begins at 10:30 a.m., followed by a discussion led by AMLT members.