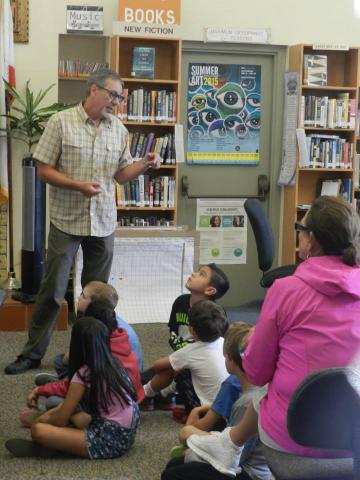 The two-week long camp, which ran from July 6-17, was created to educate children from age 7 to 13 about the environment. The camp ran from 2000-2005 and had to shut down due to financial difficulties. It was revived this year and participants are learning how to help the environment.

"We wanted to have kids be prepared for the future," said organizer Mary Hsia-Coron."We are focusing on solutions."

The camp consists of about 35 students from San Juan Bautista, Aromas and Hollister. It is taught by three teachers and six high school interns.

Some of the activities included visiting an organic farm and also planting milkweed, which helps monarch butterflies lay their eggs. The children planted trees and made organic ovens to teach them about not being dependent on fossil fuels. All of the songs and dances that the children performed had an evironmental theme.

Participants said they were enjoying the camp and learning new things.

"I enjoyed singing and going on field trips," said 9-year-old Andrea Curayag. "I learned a lot of stuff, like not to litter."

One of the themes of the camp taight kids not to eat genetically modified organisms — or GMO's — which are living organisms whose genetic material has been manipulated in a laboratory through genetic engineering.

"I learned that you can't eat GMO foods," said 9-year-old Ema Amezcua. "I also learned that plastic is made of oil and to not use plastic stuff."

The children were also shown videos focusing on African villages whose inhabitants use their surroundings for foods.

Hsia-Coron said that teaching children about the environment early on will make their futures a little brighter.