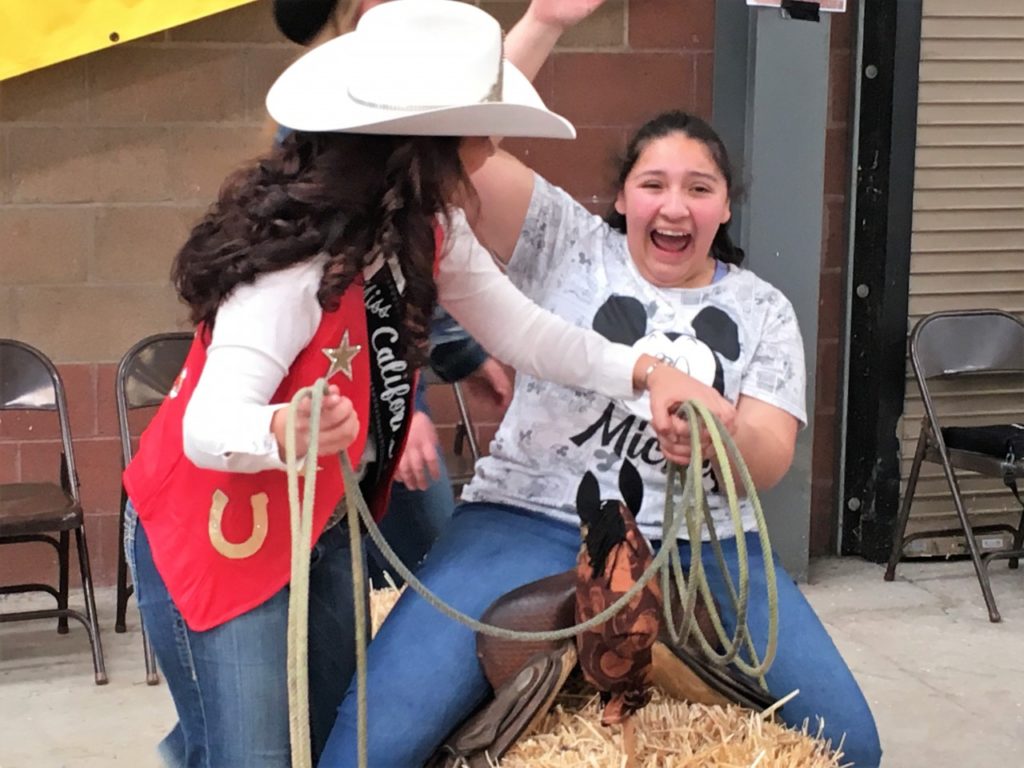 Daniell Craig grew up ranching around Hollister and still refers to herself as a cowgirl who rodeos. When she wanted to do something unique for the special needs children and adults who attend San Benito High School, she naturally gravitated toward a rodeo event.

Craig is an instructional assistant aid, who works with Tea Mendolla, for the school’s Life Skills program. She took a moment out of rushing around directing a slew of students dressed in jeans and cowboy hats, giving last second instructions just before more than 50 special needs students were to make their “grand entrance” on Thursday morning.

“This is the first annual Baler Buckaroo Special Needs rodeo,” said Craig, an SBHS alumna. “We’re just trying to get it off the ground and make it grow and get other departments in the high school involved.”

Craig said the Future Farmers of America (FFA) and the Associated Student Body (ASB) were the moving forces behind organizing the rodeo. She said the rodeo was held in an attempt to include the life skills kids with the rest of the student body.

“Besides FFA and ASB the Life Skills program, Miss Tanya Sauer, the homeroom teacher who I work for, was very helpful,” Craig said. “Miss Michele Goldstone and Paulette Cobb, who is my supervisor, were also helpful and let us do this. We’re just hoping that it will continue and grow. The community and our supporters are who’re making this happen.”

“We wanted to give (the students) an experience of rodeo, which they don’t usually get,” she said. “I’m just trying to bring my world to them and let them experience that.”

Craig said there are 47 students in the Life Skills program, ranging in age from 15 to 22 years old. She said some of the students understood the experience they were in for, but many did not.

“This is all new to them,” she said, “so we’re hoping it goes well. They’re flying in blind and we’re hoping to show them a good time. We already to a Special Needs Olympics (the Gifted Games), which the kids love, so I figured this would also be great for them.”

Joe Martin, FFA advisor, said the agriculture barn where the event was being held on campus is primarily used to house animals that the FFA members who live in town rather than on farms or ranches raise during the summer.

“The rest of the year we hold events in it like this one and our community farm day, which is in April,” he said. “We have a little over 300 kids in the FFA program. It’s an extracurricular activity and you have to be in one of the FFA classes to be part of the program, which promotes leadership and growth for students. It has a lot of leadership opportunities.”

“We have a lot of kids who do show animals and we have kids who go into our career development events,” he said. “We have a livestock team who has to evaluate livestock. They have to explain their actions. We have a farm power team so the kids learn about tractors and how to use equipment properly using critical thinking skills.”

David Grimes had a big grin on his face as sat on hay bales as he watched the “buckaroos” compete in various race events. He was one of the rodeo sponsors, donating money and belt buckles as prizes. He said he was impressed at how well organized the event was for being the first one.

Each buckaroo contestant was introduced as they were cheered on.

As he watched a young girl who appeared enthralled with swinging a rope over a plastic steer’s horns, Grimes commented, “When you think you’re having a bad day, you should spend some time with these youngsters.”