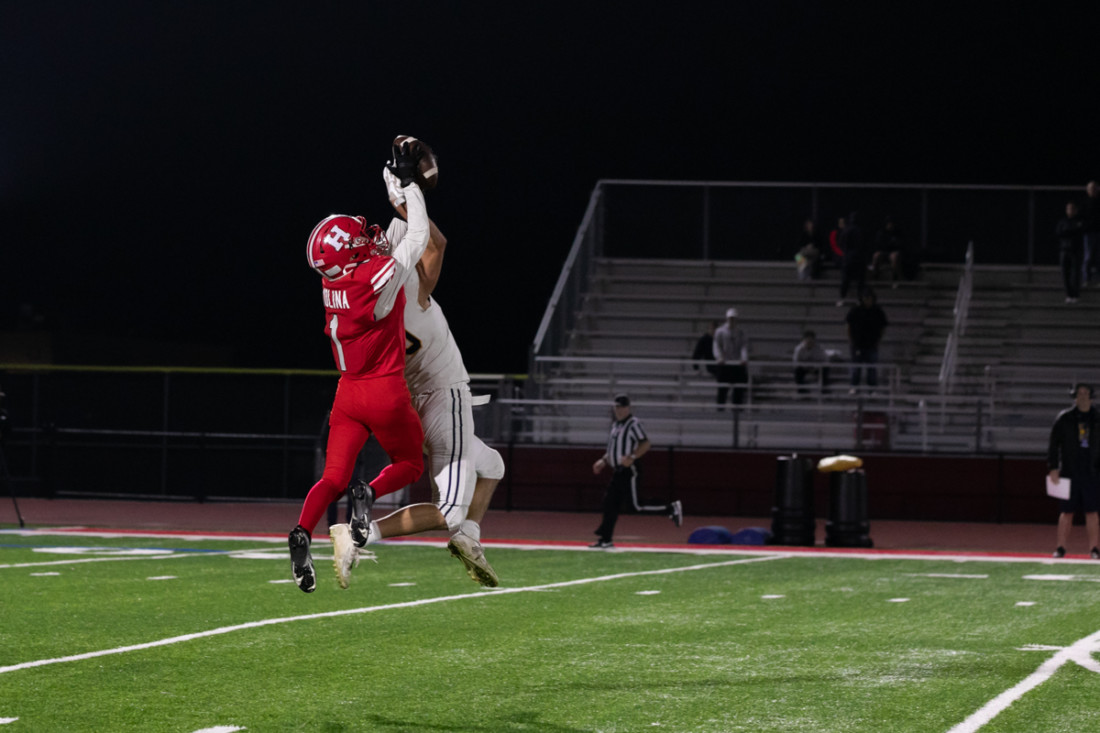 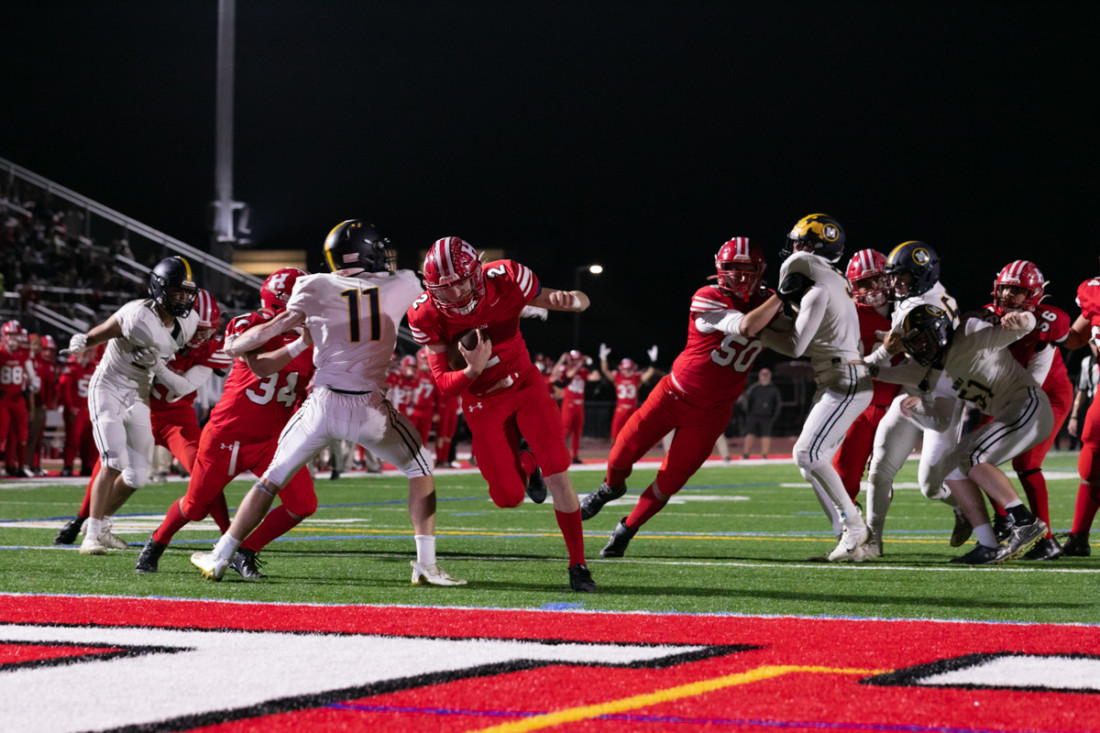 Quarterback Tyler Pacheco getting into the end zone on his 7-yard rushing touchdown. Photo by Chris Mora. 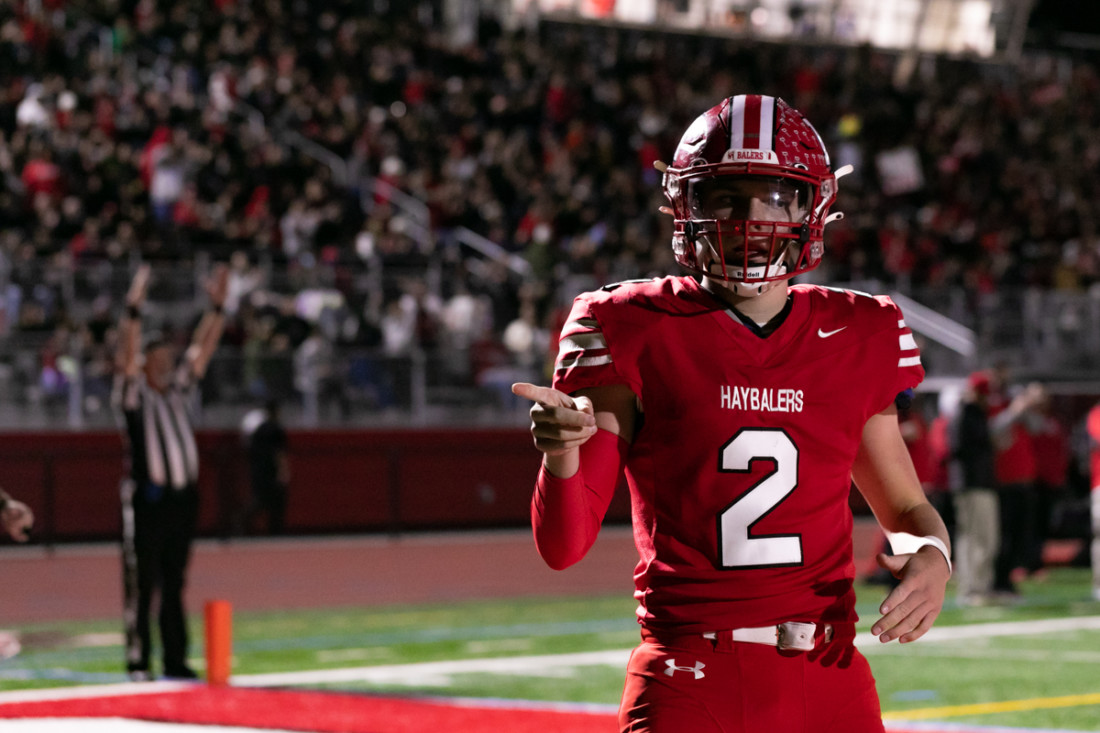 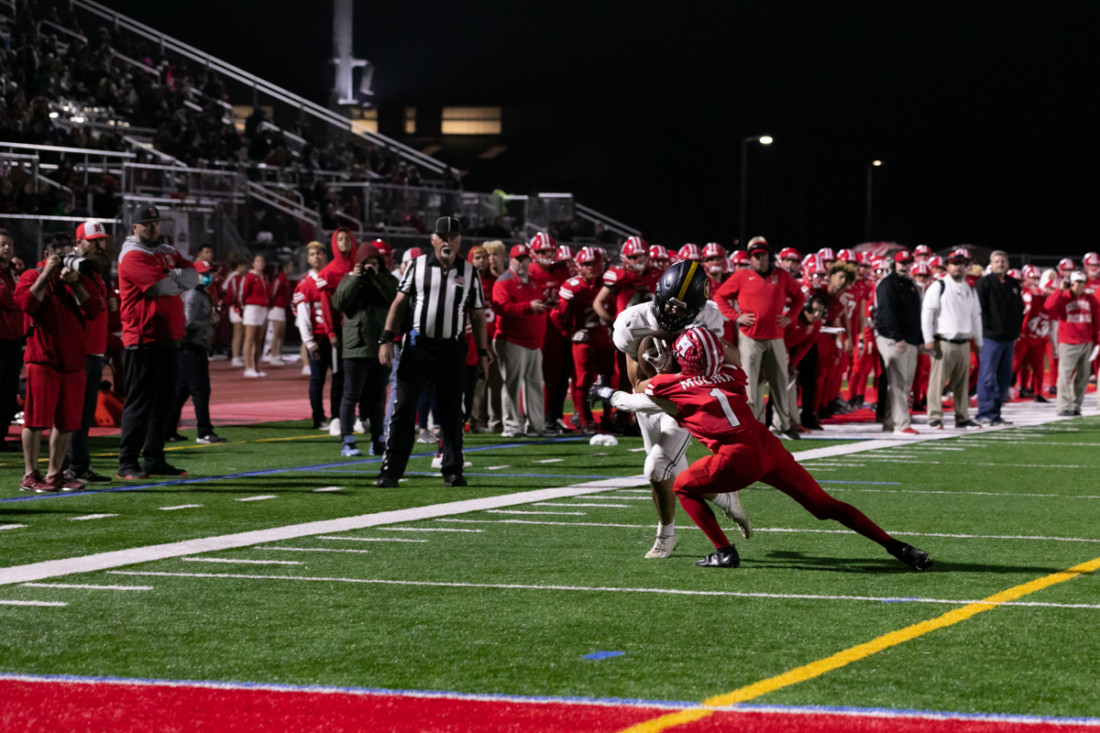 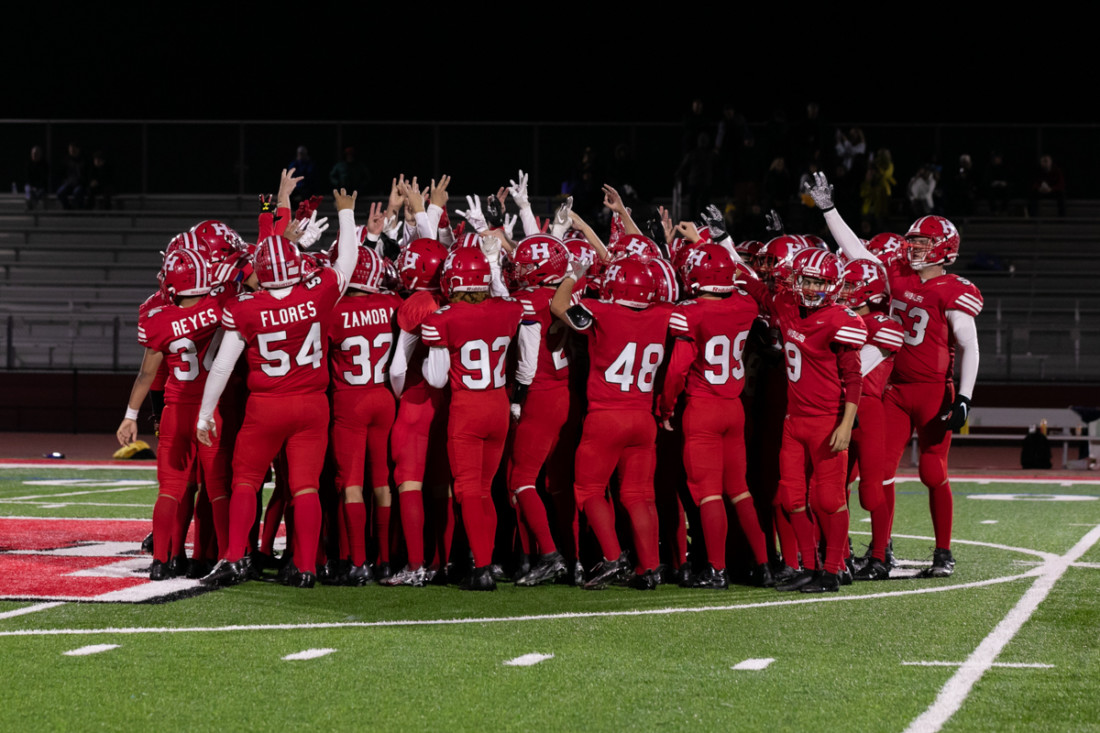 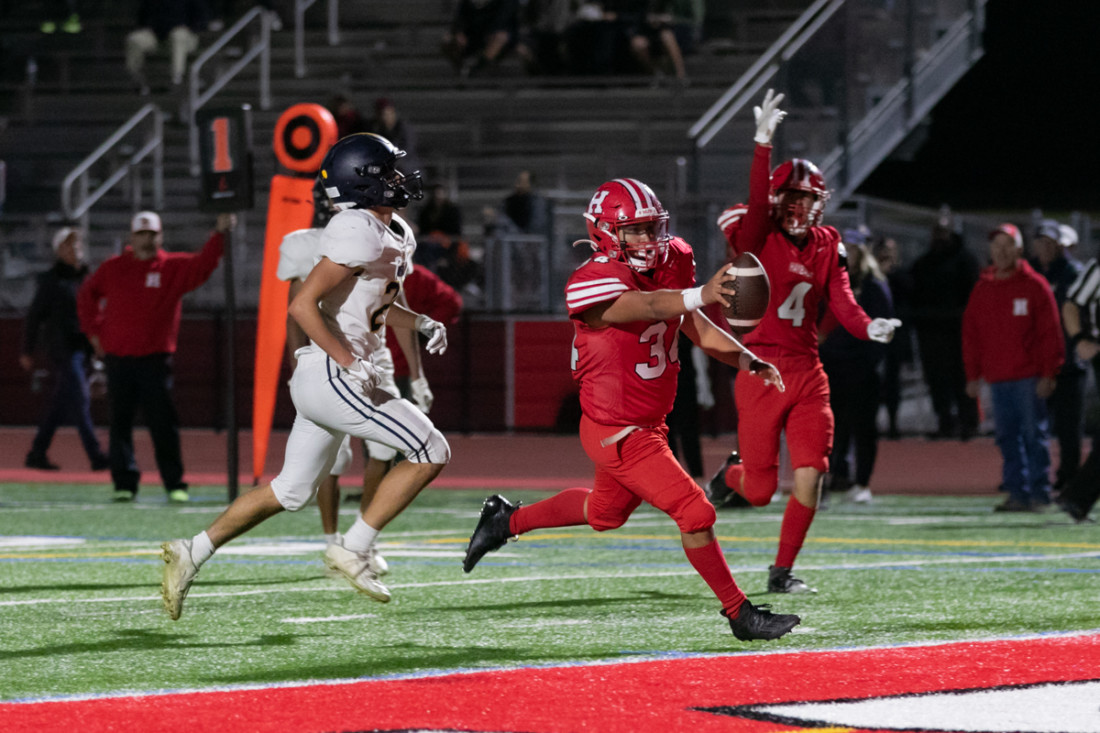 Michael Reyes scoring one of his three touchdowns. Photo by Chris Mora. 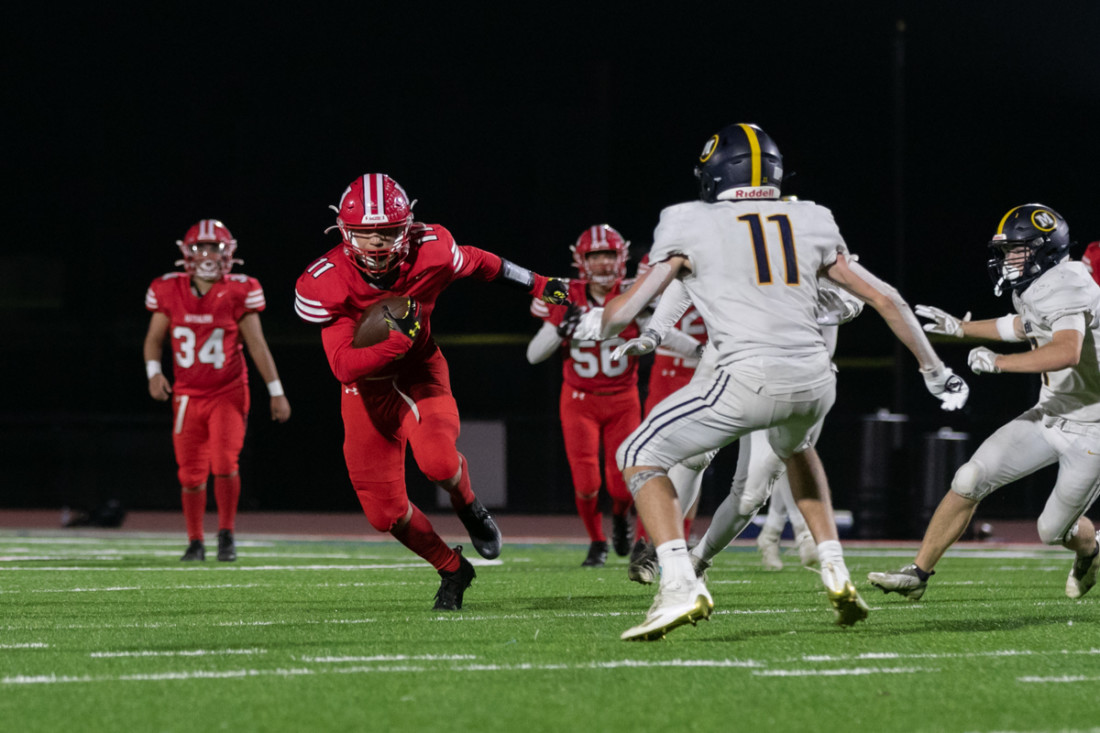 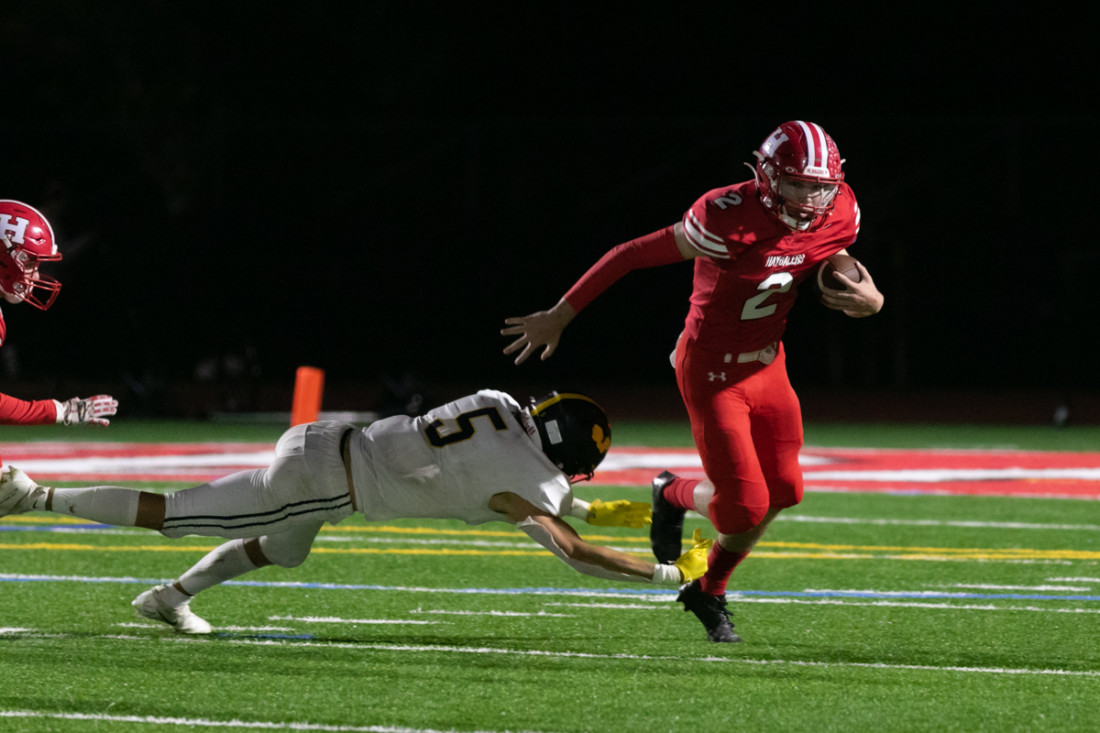 Tyler Pacheco getting away from pressure. Photo by Chris Mora. 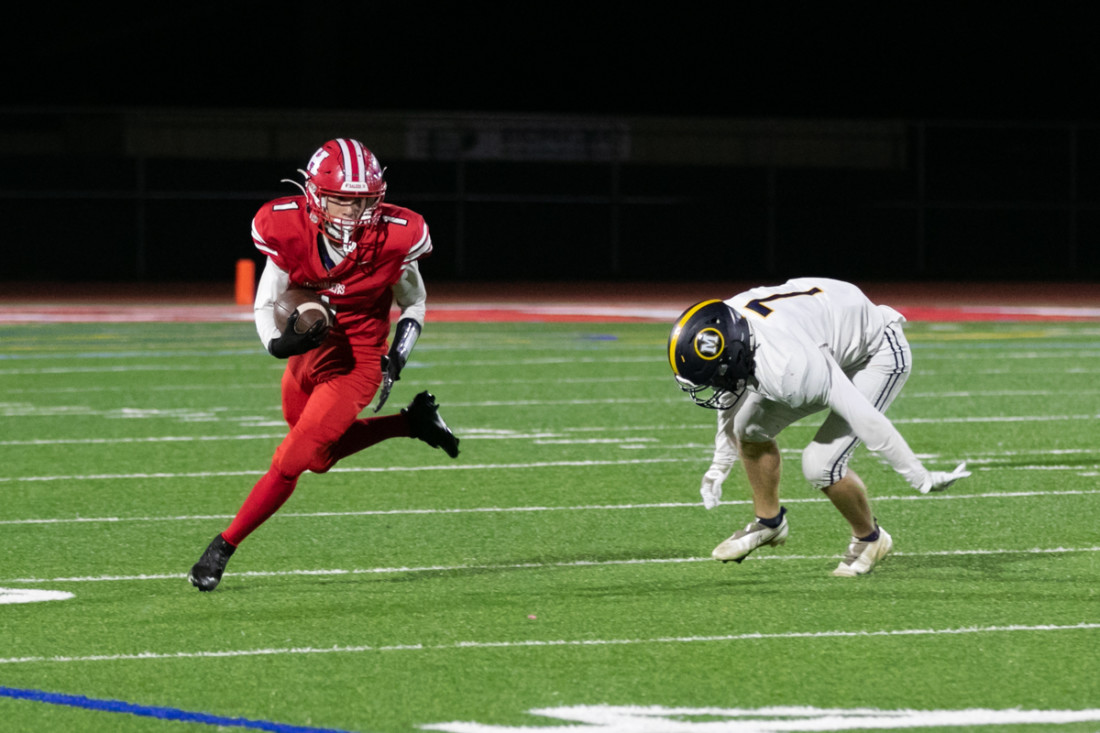 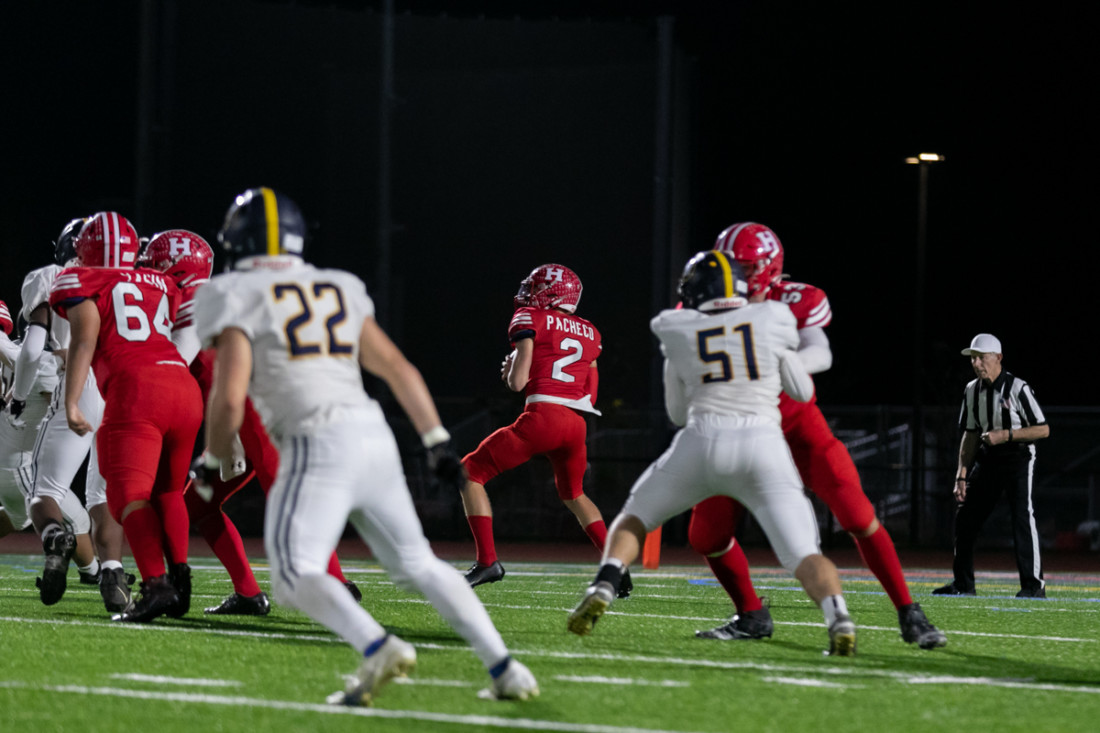 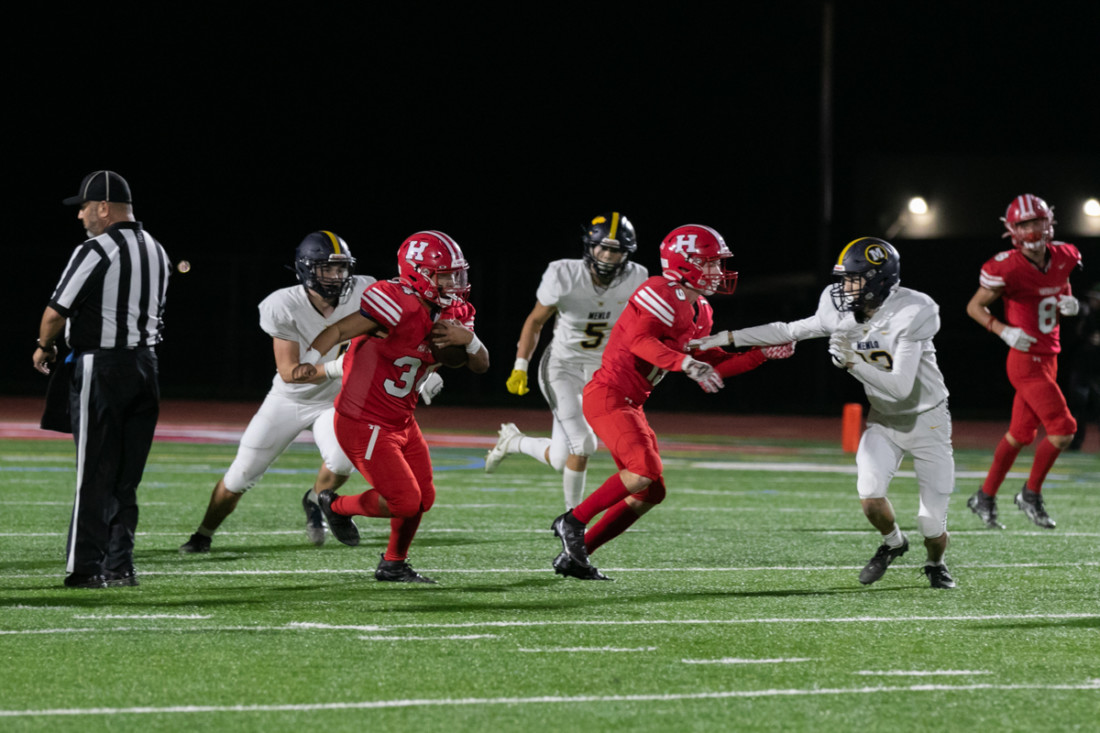 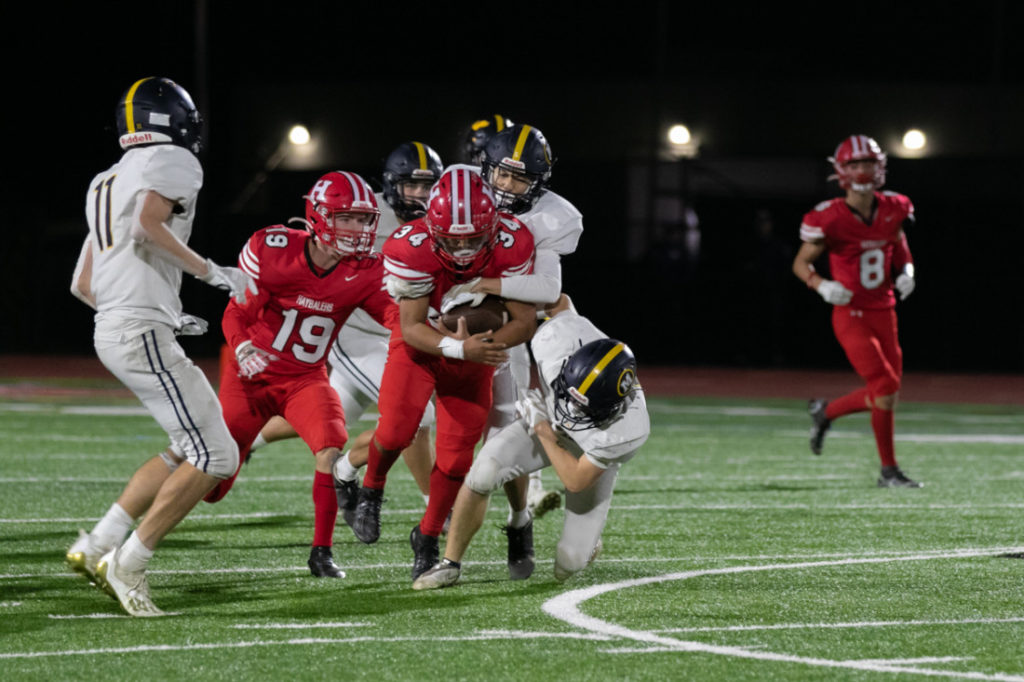 There was a surge of optimism in Andy Hardin stadium that San Benito High School might pull off yet another come-from-behind thriller as it took a 35-31 lead over Menlo High School with five minutes left in the game, overcoming a 10-point deficit at the start of the fourth quarter.

But the Baler defense could not find an answer to Menlo’s quarterback Sergio Beltran, who came up with crucial plays throughout the game and led the Knights to a 45-35 win Nov. 19 and a ticket to the Central Coast Section Division 2 championship game.

“They made some great plays in big moments. We did too,” Balers quarterback Tyler Pacheco said. “We play that game 10 times, I say it goes about 50/50. That’s a good football team. Even though we lost, I think it’s a great game to go out on. That was a fun game.”

It was a back-and-forth game that had seven lead changes.

The last lead-change came with 3 minutes left in the game on a Knights’ 57-yard drive that was set up by a 33-yard kick return. In that drive, Menlo was facing a third down with 6 yards to go from their own 47-yard line when Beltran, scrambling and breaking tackles for what felt like an eternity for Baler fans, connected with wide receiver Charlie King for 23 yards. The next play, he found wide receiver Sam Scola for a 30-yard touchdown to put up the Knights 38-35.

Beltran ended with 360 passing yards on 73 attempts, an interception and 108 rushing yards on 19 carries. He had five plays of more than 20 yards including a 73-yard passing touchdown near the end of the third quarter, answering the Balers’ 51-yard scoring drive that put San Benito within three points.

Throughout the game, the Balers looked to have an answer of their own and down by three points they turned to their playmakers. The first play was a handoff to running back Michael Reyes who was stopped for no gain.

That play was the only time the Knight defense stopped Reyes for a loss or no gain as he, after not getting any carries in the first half, became the Baler’s spark plug racking up 82 yards on 13 tries and scored three touchdowns, including the 15-yard run that gave San Benito its last lead.

“He works so hard, man,” Pacheco said. “He just has so much heart. He is, what, like five-five [in height] and just runs dudes over and runs so hard. It’s just a pleasure getting to play with him.”

With the season in jeopardy and on their own 20-yard line, the Balers opted to put the ball in quarterback Tyler Pacheco’s hands. After missing his first pass attempt, he tried to connect with Jayden Freidt but the pass was batted down by the Knights’ defense.

On fourth down and 10 yards to go, Pacheco launched the ball about 40 yards to sure-handed wide receiver Isaiha Molina but the ball sailed about five yards past the mark.

Pacheco ended with 233 passing yards, 62 rushing yards, and two touchdowns— one passing and one rushing.

Turning over the ball on downs on their own 20-yard-line with about 2 minutes left, the Baler defense hoped to duplicate what they had done in the Knights’ first drive, sack Beltran three times in a row and force a field goal attempt, or better yet, a punt.

Beltran had other plans as he ran the ball six times achieving two things— gaining yardage and allowing the time to run after San Benito used all of its time outs. Beltran ended the drive scoring on a fourth down and inches with 16 seconds left, securing the Knights’ ticket to the finals.

“We rose up to the occasion,” Smith said of the season. “We played every tough team really well. I’m super proud of our guys.”