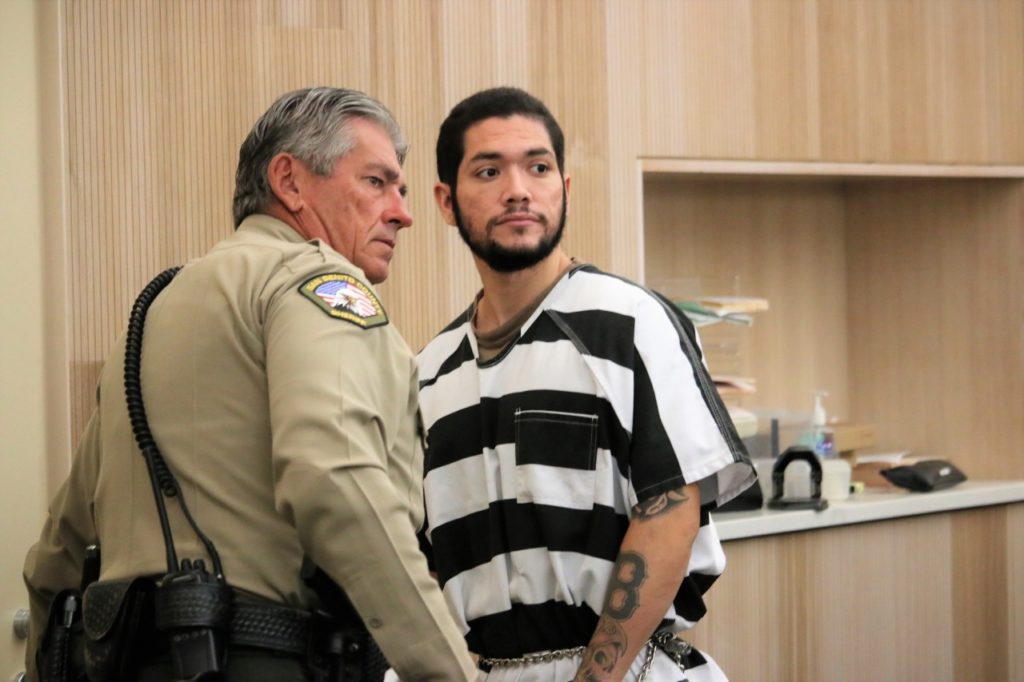 File photo: As he left the court, Barajas glanced back at someone sitting in the gallery. Photo by John Chadwell.
×

The hearing to set a trial date for Jose Antonio Barajas was delayed once again on June 27. Barajas’ attorney Gregory Laforge requested three weeks to review the witness list.

Barajas, who is facing charges of first-degree murder, three counts of attempted murder, two counts of kidnapping and false imprisonment, will return to San Benito County Superior Court on July 18 at 9 a.m. A trial date is also expected to be set at that hearing. Judge Steven Sanders indicated the trial will begin Oct. 7 or 21.

This was the second time the trial date decision has been delayed. The first time was on June 13 because Laforge was out sick.

According to deputies with the San Benito County Sheriff’s Office at an April 15 hearing, three witnesses claim barajas fired shots at a vehicle on Aug. 1, 2014 during a pursuit, hitting and eventually killing 19-year-old Ariana Zendejas, who was riding in the back seat of the vehicle. She died while being transported from Hazel Hawkins Memorial Hospital to another hospital via helicopter.

Deputies said Barajas hid near Hollister with the help of an unknown individual before escaping to Mexico, taking Vanessa Flores-Ibarra with him. Deputies also said Flores-Ibarra, who was pregnant at the time, said Barajas kidnapped her and after a time began beating her. She managed to escape and was located crossing the border in Tijuana, Mexico, on Feb. 7, 2015.

On July 13, 2018, Hollister Police Chief David Westrick announced Barajas’ arrest at an emotional press conference at the police station. Barajas was captured in Guadalajara, Mexico on July 12, extradited to the U.S and transported to San Benito County where he has been held without bail.