Brewery Twenty Five co-owner Fran Fitzharris continues on her beer journey with the opening of the brewery's community taproom this weekend. 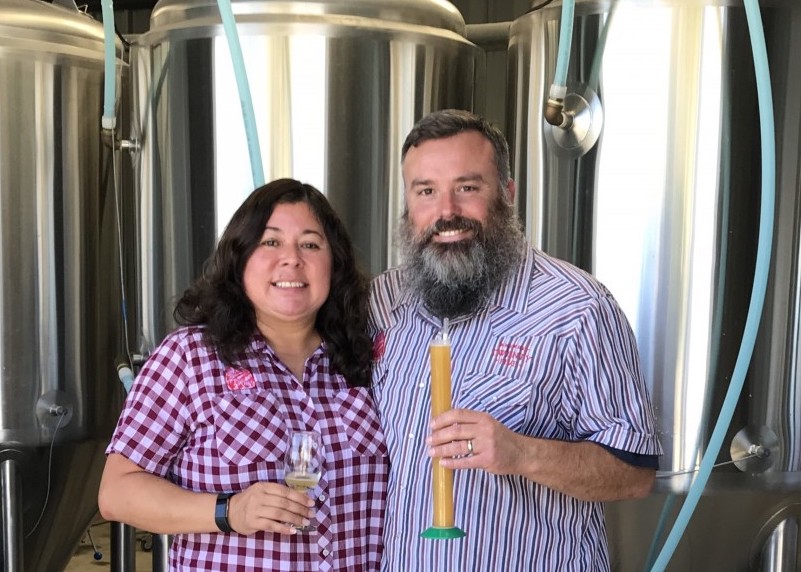 Hollister resident Fran Fitzharris began her decades-old beer journey with a single sip of craft beer, followed by beer dates with her future husband Sean, and eventually a move to San Benito County, where the couple established a brewery. This weekend, Fran’s suds-filled odyssey marks another milestone.

On Saturday, June 30, the husband and wife co-owners of Brewery Twenty Five will open the doors to their community taproom located at 106 Third Street in San Juan Bautista. The soft opening is scheduled from 12 p.m. to 5 p.m.

Standing next to three, large fermenters housed inside their Hollister brewery, which from the outside resembles a barn, the Fitzharrises spoke with BenitoLink about the path that led to this new endeavor.

In the early ‘90s, a then-twenty-something-year-old Fran grew tired of drinking American mainstays like Bud and Coors. She discovered craft beers appealed more to her palate. Thus began her nearly 30-year beer journey, she explained.

As the relationship foamed over all things beer, so did their feelings for each other.

With a move from the Bay Area to Hollister in 2001, the couple tried their hand at homemade brewing. They married in 2004.

Another of their big leaps came in 2014 with the start of Brewery Twenty Five, San Benito County’s only full-scale, commercial brewery.

“We were looking for something that spoke to the area,” Sean said about choosing a business name that referenced State Route 25, the “main artery running north to south” through the region.

And owing to Sean’s improved understanding of the brewing process, it wasn't long before the brewery churned out 200-gallon batches of locally produced and consumed beer.

With each new filled keg, the Fitzharrises gained a following and specialized their roles within the business.

“Sean has created and dialed in all of our beers,” said Fran of her spouse, who still works part-time for Cisco Systems.

Fran runs the brewery’s day-to-day operations, including servicing the nine local accounts that sell its beer and responding to inquiries and comments posted on the company’s social media accounts.

“She’s great at interacting with the public, and she’s plugged into the beer community,” Sean said of his wife’s strengths.

The couple’s decision to open a taproom in San Juan Bautista was fueled by industry standards and their love for the City of History.

“A taproom is critical for any brewery,” Fran said, adding that it’s a place for followers to come in and talk to the individuals behind the beer.

And citing special family occasions held in San Juan, including the exchange of their marriage vows, she said the city “holds a special place in our heart…It just felt like the right place to share our passion.”

The brewing couple’s adoration for San Juan is illustrated in the label adhering the 32-ounce crowlers and featured on the brewery’s soon-to-be released apparel and other merchandise that will be on sale at the taproom.

From the vantage point of the Fitzharris home, which offers a panoramic view of San Benito County, Fran reflected on the most rewarding part of her beer journey.

“All the people that I’ve met along the way,” she said.

Among those is the late Robert Garza of San Jose, whose untimely death occurred earlier this year.

A friend and fan of Brewery Twenty Five, Garza often met up with the Fitzharrises in Hollister and searched local liquor stores for Garza’s favorite type of beer.

Later this year, the brewery will release the “Garza”—the company’s first ever double IPA.

“It’s a way for us to celebrate and honor [Robert’s] life,” Fran said.

This weekend the Fitzharrises will have the opportunity to talk about their late friend and the couple’s story over a glass of Brewery Twenty Five beer, quenching one’s thirst and perhaps inspiring another’s beer journey.

Brewery Twenty Five taproom is located at 106 Third Street in San Juan Bautista. The taproom will be open on most Saturdays through the month of July. Please visit Brewery Twenty Five on Facebook or on Instagram @brewerytwentyfive to learn about taproom hours.