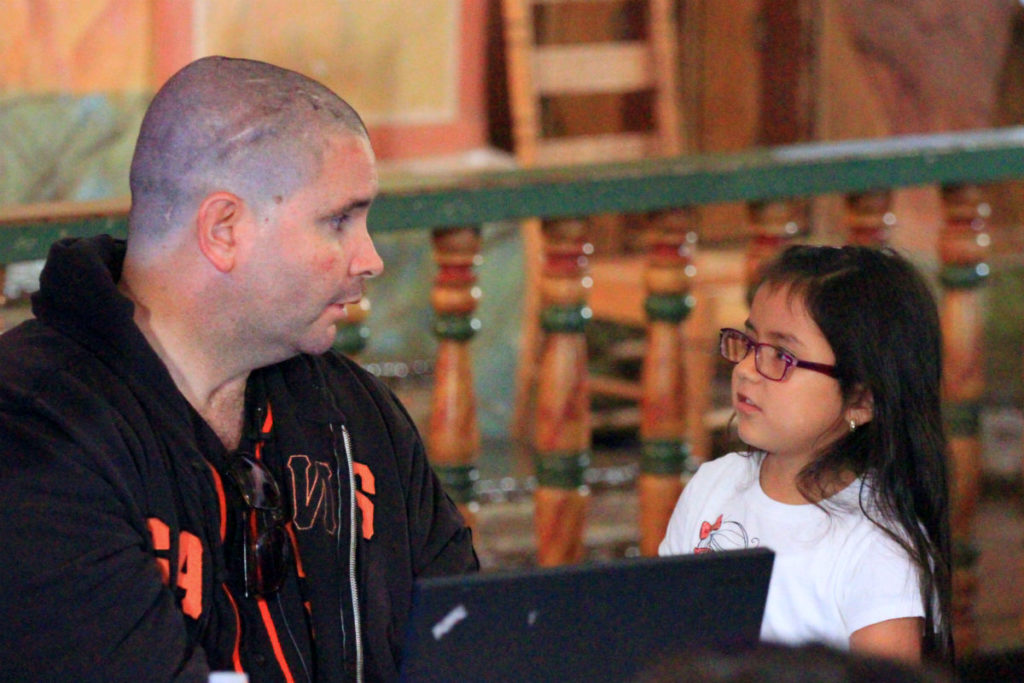 Six-year-old Frida Beatriz Quintero, right, approaches Bryan Stow in the middle of his speech to ask what it was like for him to be in the hospital. She related her own experience of being hospitalized for appendicitis before Stow admitted his brain damage prevented him from remembering his hospital time. Photos by Sean Roney. Bryan Stow talked to a crowd of nearly 400 in San Juan Bautista about standing up to violence and putting an end to bullying. The former paramedic from Santa Cruz discussed what his life has been like after being attacked and brutalized outside Dodger Stadium in 2011, and then had the packed crowd inside Mission San Juan Bautista pledge to make a difference.

“Bullies destroyed my life. Bullies hurt my family,” Stow said on Saturday, March 12. “It’s important to know that families are victims, too. It’s like a domino effect. My parents are now caregivers for their 47-year-old son.”

Stow’s family was present as he described how his life has changed. He contrasted his former career as an ambulance driver with having to be put in the back of his mother’s van in a wheelchair. But he has progressed from wheelchair, to walker, to crutches, to a cane over the years. “Now I’m in the front seat. I’m calling the shots,” he said as the crowd burst into laughter. “One day my ultimate goal is to be driving again.”

“It was great, truly inspiring. Everything he’s gone through and he still wakes up with a smile. He has such a great spirit,” said audience member Angel Gutierrez, 13, of Hollister. “It shows everyone that they can stand up to bullies.”

Though physical and speech therapy have helped with his mobility and talk, Stow described the ongoing challenges, counting out the 24 and a half different pills he has to take, some to keep seizures at bay.

“That’s a lot of meds just to keep me working,” he said. “I will need that help for the rest of my life.”

Stow described his story as a consequence of bullying. He went from a job saving lives, to nine months in a coma because of the brain injury he received in the 2011 beating. “I had to learn how to live all over again,” he said, going on to describe re-learning to walk, write, read, and eat without a feeding tube. One quirk in the process he pointed out was that while he was right-handed, for a period in his recovery, he wrote with his left hand.

“They messed me up good,” Stow said. “It affected my elbows, knees and shoulders, forever limiting my range of motion.” He demonstrated how little he could move his left arm for the crowd.

Despite the setbacks, he said, “Keep a positive attitude. I can still do my favorite things in life.” He described his continued fandom for the San Francisco Giants, and what it was like to be asked to throw a first pitch at a minor league game for the San Jose Giants.. “I can still work out. Four days a week I can bicycle, row, I can even do pull-downs…I can still go to concerts…My family is still as strong as ever.” His points were met with applause from the crowd.

“It did not have to be this way. Fan violence equals adult bullies. You should be able to cheer for your team,” he said as he shifted from his life story to talking about bullying in general. “Nobody needs to get hurt.” He went on to say, “I survived for a reason. I’m finding my purpose again. I’m on a mission to tell a story of survival. I want to stop adult bullies from hurting anyone else.”

The crowd was instructed in how they could stop bullying and protect others in need. Stow led them through a series of points, where he had them repeat each one. “Don’t be a bystander,” he said, reminding the crowd that there is power in numbers or even as individuals. “Speak up to an adult,” he said, reminding the youth that they weren’t tattle-tales but rather, life-savers. He encouraged everyone to reach out to victims, as he said, “We’ve all been victims of bullying. It sucks.” He went on to say, “To truly be cool, treat others with kindness and respect. Be a friend to everyone. It never hurts to have more people on your team.”

To solidify his point, Stow had the audience reflect. “Have you ever been bullied? How did it feel? Bad, right? It feels scary,” he said. “Do you really want another person to feel that experience that you did?” He also had people reflect on times when they had bullied others, and how it wasn’t worth it.

Stow led the crowd in his Anti-Bullying Pledge, where everyone stood and promised to make a difference. The pledge goes: “I will treat others with kindness, compassion, and respect. I will not be a bystander to bullying. I will stand up and speak out when I witness bullying. Bullying hurts lives and I’m a life saver.”

Spreading the anti-bullying message nationwide and even worldwide is one goal Stow said he has. “I want to stop bullies and end violence,” he noted.

The two men who attacked Stow were convicted to eight and four years in prison, respectively. “As far as I know, they’ve made no effort to apologize or to regain respect with me or anything,” he noted. He went on to say he didn’t remember them due to the brain damage. “I don’t even remember that whole day. I didn’t even know I went to the game. That’s how bad it was.”

Memory problems are one of the issues that plague Stow, and it was brought up when 6-year-old Frida Beatriz Quintero walked up to him and asked what it was like to be in the hospital. “I was there for nine months, and I don’t remember any of it,” Stow answered.

“It’s amazing how many people turned out for this,” said Stow in reaction to the crowd. He noted that seeing the room stand and take his pledge was “a great feeling.” Afterwards, audience members lined up to talk with Stow and take pictures with him. He signed autographs and continued to share his positive message with people of every age. “It feels really good to have people tell me what they thought,” he said.

The local speech was organized in part by Nancy Lopez, who said she had a couple nephews who were paramedics and had worked with Stow in the past. “We’re trying to instill mercy into the kids,” said Lopez, an eighth-grade catechism teacher at the Mission. “We want to teach them about bullying and teach them about that the Pope wanted to see mercy this year. I thought Bryan would be the best person to do something like that for us.”

Planning started in October, and the catechism students began preparing projects for the visit. “He volunteered to speak and try to stop this from happening to somebody else,” Lopez said. She also credited Stow’s sister, Bonnie Bush, with helping to organize the visit.

Mary Edge of Mission San Juan said Father Jerry Maher decided to use the Mission’s chapel for the speech, because of acoustics and capacity.

Those interested in contributing to Stow’s efforts can visit www.bryanstowfoundation.org.