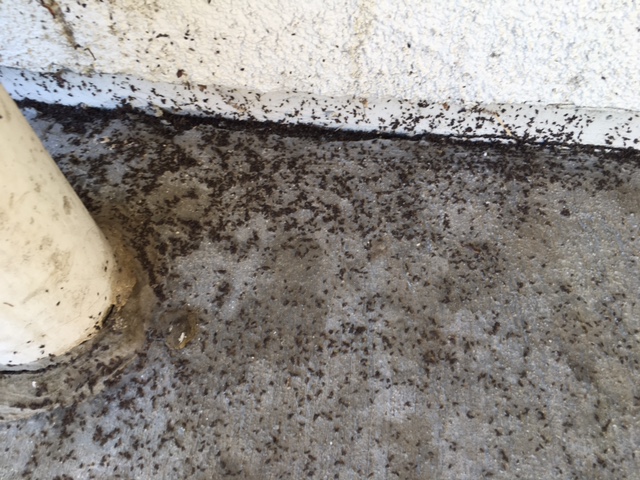 An infestation of tuxedo bugs on a portion of the San Benito High School campus forced the cancellation of some summer school classes midway through the morning session Monday and prompted school officials to cancel Tuesday's classes while the insects — which live in weeds and do not bite or fly — are exterminated.

Summer School Principal Elaine Klauer said the infestation was prompted by construction on the southwest side of campus, which apparently stirred up the insects. The small, crawling bugs were found in and around the 400's classrooms just south of Nash Road on the west side of campus. Maintenance crews sprayed outside of classrooms Monday morning prior to the announcement that classes would be cancelled at 10 a.m. Students in the 300's classrooms on the east side of campus near Nash and San Benito streets, continued classes as scheduled.

Students and parents were notified by email and phone and campus supervisors went classroom-to-classroom to tell teachers and students that classes were being cancelled. This is the second week of a three-week summer school first semester. Another three-week session follows that. There are 816 students enrolled in this session of summer school, including 426 in the 400's campus where the infestation occurred. Another 390 students are taking classes in the 300's classrooms.

The evening migrant summer school classes, which teach 178 students in seven classes in the 400's classrooms, will relocate to the 300's area of campus for the next two nights because of the insect abatement. Those students will not miss any classes.

Klauer told BenitoLink that the infested area would be treated and inspected by the county health department and integrated pest management specialists.

"There will be no school for all daytime students tomorrow, June 21," Klauer said. "Classes will resume on (Wedesday) June 22 at the regularly-scheduled time," which is 8 a.m. Classes will not be held on Friday, as scheduled, since summer school runs from 8 a.m. to 1:20 p.m. Monday through Thursday.

Klauer clarified that all students who were present on Monday will be marked as having been present for the entire day and that Tuesday's 400's campus closure will not add to students' absences. In summer school, students are not allowed to remain enrolled if they have more than three absences.

According to the University of Idaho Extension, tuxedo bug, or Raglius alboacuminatus, "essentially are harmless, (though) sheer numbers make them an intolerable pest."

The non-native insect widely distributed in Europe, northern Africa, and western Asia, and was first detected by scientists in Utah in 1999. No one knows for sure how it arrived in the United States. The tuxedo bug subsequently was detected in California and Oregon in 2002.