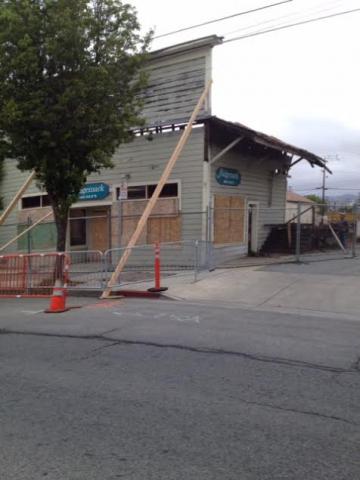 More than 14 months after a fire destroyed most of the building at 853 San Benito St. in downtown Hollister, crews on June 4 demolished and cleaned out the remainder of the site, which has been a source of contention between city officials and the building's former owner for more than a year.

A recent sale of the building to Derek and Darin Del Curto, according to City Manager William Avera, spurred the demolition, which had been on hold since last spring. Avera said the new owners "talked about trying to do a mixed-use type of project, with some commercial right off the street and residential in the back — though nothing formal has been submitted."

The Hollister City Council set aside $100,000 to pay for the demolition of the building as well as potential abatement costs surrounding items such as lead paint and asbestos in the burned out structure that once housed Ridgemark Realty. Officials said their preference was for then-owner Tim Lantz — whom at one point was called "obstructive and non-compliant" by Management Services Director Mike Chambless — to clean up the site. Officials said that at the scene of the March 2014 fire, Lantz admitted to living in an illegally-converted portion of the building.

The city set aside the money with the idea that any abatement costs would be placed as a lien against the property, ensuring that the city would be reimbursed for clean-up costs if the property ever sold. The building's site has been surrounded by chain link fencing for months. Avera said, "we never formally placed a lien on the property," and the city did not have to demolish the building, so there was not a need to use the set-aside money.

Lantz is a general contractor that restores historic buildings and had owned the San Benito Street property for 13 years. He addressed the council at an October 2014 meeting and was given six months from the issuance of the demolition permit to complete the work.

Avera said that once the site is cleared, "which shouldn't take them too long," he assumes engineering and architectural work will be done. "It usually takes at least three months for projects to get through the Planning Commission."