Representatives of Rovella's Gym and other youth-oriented businesses on Industrial Drive fear if marijuana dispensary opens on same street, children will be at risk 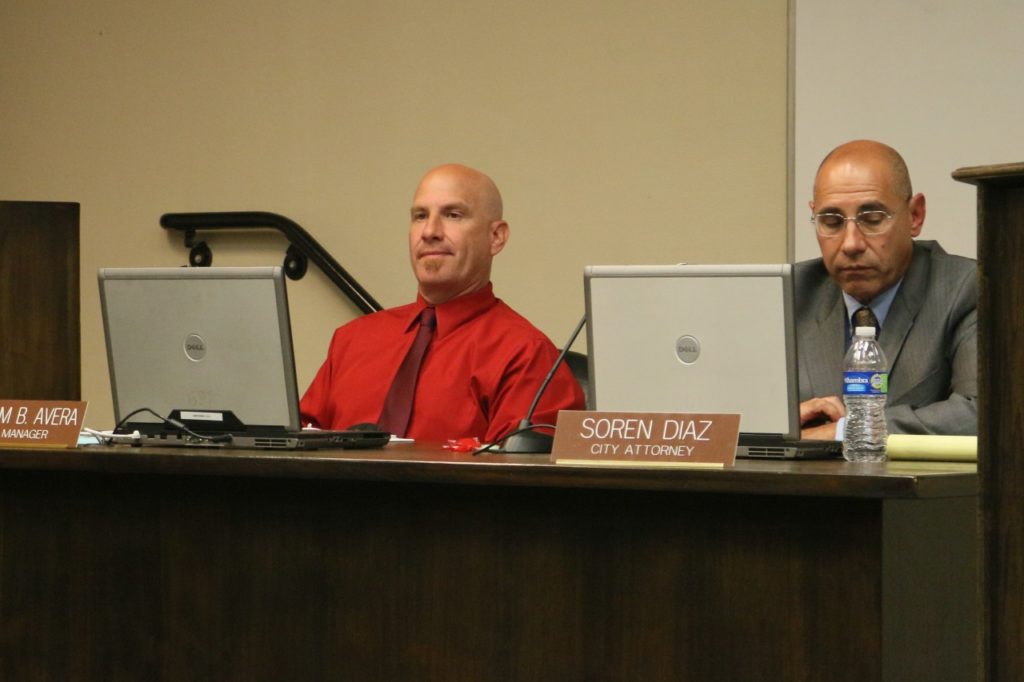 Even though Hollister City Manager Bill Avera asked the city council on June 5 to reschedule a resolution that could move Higher Level of Care, a cannabis collective, to the medical cannabis conditional use permit stage, there was no holding back opponents and advocates of locating a medical marijuana dispensary in a 16,142 square-foot warehouse at 817 Industrial Dr. If approved, the dispensary would be located just down the street from Rovella’s Gym & Health Spa and USA Sports, whose owners protested the dispensary being located within a few hundred feet of where hundreds of children come every week.

Those objecting to the location of the dispensary said they were primarily concerned about the children. But as Jack Kirk was intimating that there might be collusion between Higher Level of Care and someone on the city’s payroll because the company had paid $2.150 million in cash for a building with an estimated value of just $900,000, Councilman Raymond Friend became angered enough to demand that Kirk sit down and be quiet.

Avera had readily admitted he made a mistake in moving forward with the resolution prematurely. He explained that a portion of a Feb. 13 resolution that the council adopted was not carried out as specified by the council that would determine which applications—a maximum of two—would receive a medical cannabis dispensary permit. The resolution spelled out that Avera would prepare a report for the council that included the points scored by the applicants. Those applicants would be included on an agenda for a council meeting for a public hearing. The point Avera was making was that the notice of the June 5 meeting had not declared it as a “public meeting,” so the council could not consider the resolution.

“That is essentially my first mistake,” he said, explaining that at the public meeting the applicants would be able to appear before the council to answer any question or make presentations. Then the council would choose which two applicants would receive permits. Avera said city staff had prepared a resolution for a special meeting to include the public hearing on June 26, and the notice, as legally required, had been submitted to the newspaper for publication.

Mayor Ignacio Velazquez told the audience that even though the agenda item had been moved to June 26, if anyone who had already filled out a speaker’s card wanted to still speak, they could do so. Steve Rovella, owner of Rovella’s Gym & Health Spa, was the first to object to the dispensary being located near his business because of the number of children who use his facility.

Amy Oelrich, who has coached at USA sports for 10 years, said she was disappointed when she found out that that the city council was considering approving a dispensary across the street from five businesses—USA Sports, Rovella’s, Happy Jumpy, San Benito Aquatics, and Sammy’s Animation Studio— that often have children in them.

“We have over 477 kids going in and out of our facility a week,” she said. “The parking is sparse. USA Sports has always been a safe place for kids.”

Oelrich asked the council to use the same guidelines for schools and child care facilities and apply them to the kid-oriented business on Industrial Drive.

Kirk began his comments by explaining that in writing the medical marijuana regulations, the council had not included parks and recreation areas, which has resulted in the business owners coming before them to protest the decision.

“You need to be careful because this is your legacy, what you’re doing here,” he cautioned, and then claimed that Higher Level Care had already experienced problems in Castroville and Carmel.Kirk then tossed out the not-so-veiled accusation, “It’s interesting that the building Higher Level Care wants to go into, they just paid $2,150,000 cash for it. Who would do that without a little nod that they’ve got a license coming? I’m concerned that perhaps someone on the council has given them the nod that they will push it through.”

Then Friend jumped in, “Sit down! I’m not going to sit here and listen to somebody call me—“

“Councilman Friend,” the mayor said, trying to calm down Friend.

Kirk sat down unperturbed at the hubbub as Taylor Rodriguez, who has been lobbying for a dispensary permit for months, told the council that he doesn’t mind losing out to other applicants if “it’s a fair fight.” He requested the application procedures be properly followed so the competition is fair. Steve Becerra said he and others had been actively trying to assist with the process in coming up with regulations and that it wasn’t a secret that the cannabis industry wanted to locate on Industrial Drive.

“The community was concerned about the businesses there and we asked you to please take them into consideration,” he said. “That didn’t happen. This may impact those businesses that provide services to our youth.”

Cautiously, Becerra referenced the “good old boys network” and thanked the council for slowing the process, but reiterated Kirk’s contention of possible untoward dealings by pointing out the escrow on the building closed on May 10 for over $2 million in cash.

Elia Salinas, a spokeswoman for the marijuana industry, called out Kirk for “accusing anybody for trying to do special deals behind closed doors” as she went on to say she was amazed that the opponents of medical marijuana did not have a problem with a nearby sake company, Ozeki Sake.

“Minors don’t go in that sake facility and the same thing will happen with any medical marijuana facility in that location, which is appropriately zoned and compliant with state regulations, as well as codes issued by the attorney general,” she said. “There was a concern about security. Actually, having this industry in your area is going to increase security, which is more security than a pharmacy in town that has been robbed three different times at gunpoint.”

Hollister resident Marty Richman accused the council of not following its own rules.

“You put those rules into effect and forgot about them five minutes afterward,” he said. “That’s a serious error. The people who come up here and imply something, you can’t blame them. The city manager said we made a mistake. How did he make a mistake like that? How many more are we going to make? You spend thousands of hours on these regulations to put these regulations into effect and then all of a sudden ‘we forgot.’ That’s unforgivable.”

Richman said there has been much debate on how many feet there needs to be between a dispensary and certain kinds of facilities, but, “nobody pulled out a map and said, ‘what if we put something right there?’ How many people are going to complain about it?”

He also considered why a company would pay so much for a building to house medical marijuana.