Dumpster for the homeless. Portable toilets, dumpster and wash station added to encmapment as city and county officials disagree over who is responsible for cleaning the site 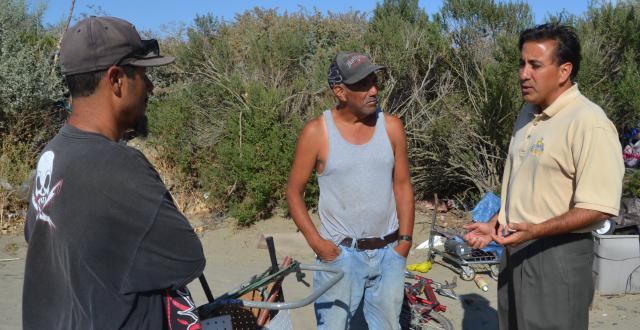 At the July 20 Hollister City Council meeting, Chuck Mullaney, CEO of Advantage Truss, a design and manufacturing company located along the San Benito River near Brigantino Park, made several claims about the nearby homeless encampment that he wanted the city and county to address.

Mullaney said people living in the homeless camp on the opposite bank were crossing the dry river at night and coming into his facility to steal tools and scrap metal. He also claimed that work vehicles had been purposely sabotaged.

Because of the alleged nightly intrusions, Mullaney said he was forced to hire a night watchman to protect the property. He said the watchman was being confronted by trespassers almost every night.

“If we run them off, they come back the next night,” Mullaney said. “We’re not getting any help from the city or county and I’m getting frustrated. I want them to address my losses and what they’re going to do about it. I told them I would like to have a sheriff’s officer out here from sundown to sunrise, and they said that’s not going to happen. They don’t seem to care.”

Some of his frustration, he said, is due to the fact that the county forced him to disconnect the sewage line from a trailer—used by the night watchman—to a septic tank because the property is not zoned for housing.

“I knew it wasn’t legal, but figured they’d let it slide,” he admitted, “because the river isn’t zoned for people to live in, either, and they’re urinating and defecating in there. I hook up to my own septic system and they (county) come out and say I’m going to be fined $250 a day if I don’t disconnect it. I’m putting up with the homeless defecating in the river and the stealing. It’s getting out of control and I’m not going to put up with it for another two or three years.”

In answer to Mullaney’s concern with the homeless fouling the dry river and damaging the environment with trash, City Manager William Avera said during the council meeting that portable toilets and a dumpster were going to be placed on the east side of the river.

After hearing Mullaney’s concerns, Mayor Ignacio Velazquez went down to the homeless camp on July 21 to verify that the portable toilets and dumpster had been brought to the area. A dumpster had been placed alongside San Juan Road, near the bridge over the river, and two portable toilets and a wash station were set up on the north side of the bridge alongside the river.

“County Health and Human Services ordered the portable toilets and the city brought in the dumpster,” Velazquez said. “They will remain there until we find a permanent solution, which, at this time, is the new homeless shelter that will be built on Southside Road next to the old hospital.”

Velazquez walked through the homeless encampment, which is, in fact, two camps: one made up of English-speakers, and the other Spanish-speakers. Mullaney estimated there are as many as 80 to 100 people in the camps, but when Velazquez walked through there were no more than 10 or 15 people. Those who would talk to Velazquez–sometimes staying out of sight behind structures–denied trespassing onto the Advantage Truss site. He warned them to stay clear of the property and also told them that the portable toilets and dumpster had been dropped off nearby.

An additional concern of both the county and city is a growing pile of trash below the bridge near the homeless camp. Mullaney believes the homeless are responsible for the illegal dumpsite.

“There’s always a tendency to blame the homeless, but there are a lot of other people out there dumping trash,” Velazquez said.

The city and the county are at odds as to which entity is responsible for the cleaning up the dumpsite.

“I understand what he’s (Mullaney) upset about, but he’s yelling at the wrong people,” said Raymond Friend, District 1 Councilman, and mayor pro tempore. “We pushed them (the homeless) out of downtown and they moved out there (the river), so now they’re a county problem.”

As for the ever-growing pile of trash, Friend said that is also the county’s problem.

“We’ve been bugging the county and Fish and Game every meeting because that’s the first thing people see when they drive into the city,” he said. “But they won’t do anything about it.”

Velazquez said it has been difficult to clean up the area because it’s along a river.

“We have requested a few times at our council meetings that it be cleaned up, but have been told that the Department of Fish and Game has to give permission before anything can be removed,” he said. “Everybody has a different interpretation, but I’ve said many times let’s just get the trash pulled out of there. We never get a clear answer why we can’t do it. We’ve talked about it for two years now, and in the meantime it just sits there. I’m trying to get a better answer about why we can’t do it, rather than hearsay on why we can’t.”

“I have no idea what is holding up the cleanup,” Wong said. “Fish and Game won’t do anything unless there’s water in there and at this point they won’t remove it, either.”