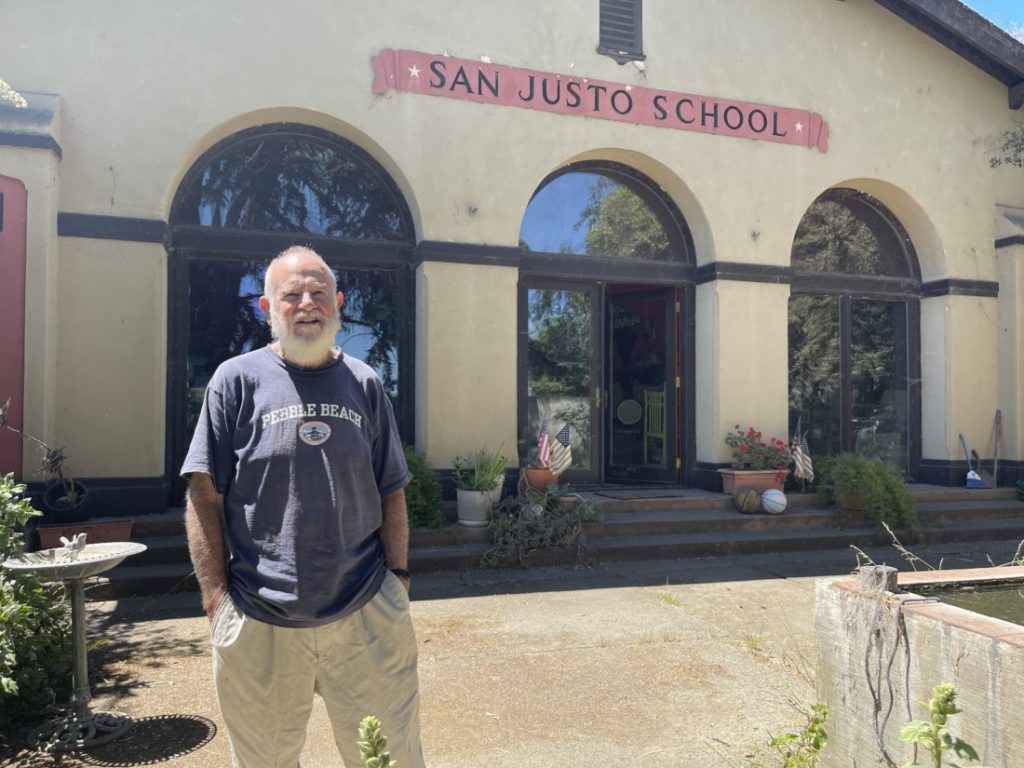 Most people driving between San Juan Bautista and Hollister on Highway 156 have probably never noticed the San Justo School building alongside the road. Surrounded by trees that shield it from view, a quick glimpse of the historic 102-year-old building can be had if you know exactly when to look through the gaps between branches.

Having survived an attempt to demolish it almost 50 years ago, during the planning of the current highway, it will again be getting a reprieve, courtesy of Caltrans and owner Ted Thoeny, when the construction of the new four-lane road begins.

The school was constructed in 1920 to educate children within San Juan Bautista as well as those living on farms and ranches outside of the city.

It remained in service until 1969 when it was deemed both too small to accommodate a growing number of children and in the way of the construction of Highway 156. There is not much mention of it in local histories and newspapers other than occasional notices of public meetings on farming issues.

Thoeny first saw the school in 1974 on an official trip in his capacity as city engineer of Seaside.

“I was headed to a conference in Fresno,” Thoeny said. “I drove by there and saw a sign saying it was for sale. The state owned the school and had wanted to put the freeway through it. They had debated it for several years and finally decided to go around it. So they put it up for auction.”

Theony attended the auction and lost during the first round of bidding.

“There were three or four of us at the auction,” he said. “There was an old guy there who bought it for $39,000. He went on to have himself declared incompetent because he really didn’t know what he was doing. They put it up for auction again and this time there was only one other bidder. I ended up paying $35,000, which is about what a house was going for in the mid-’70s.”

At the time, Thoeny was still the city engineer for Salinas. He was enrolled at Stanford University until his parents’ divorce took him to the Southern Hemisphere.

“My mother decided to move to Santiago, Chile, and was taking my younger brothers,” he said. “She asked me if I wanted to go and of course I did. I was around 19 years old and I spent about a year down there before the draft board called me back because of the Korean War. When I told them I was going to school, they told me to go back and get my engineering degree because the war was ending at that point.”

In 1986 he became the city engineer for Morgan Hill. At that point, he and his wife Mary Jane made the school their home.

It was a fortunate choice of owners for the old building, as Thoeny’s knowledge of engineering would come in handy later when the school again was threatened with destruction. It was not the first historic building he tried to save.

“I became a lifetime member of the San Benito County Historical Society,” he said, “and I helped survey the Historic Park. We tried to save the old Dance Hall—we braced it but it blew down two or three times. There was just no way to save it as it was, with the original wooden floor. It’s concrete now. There was also an old steel truss bridge we put back together but it got washed away in a storm. It was one disaster after another out there.”

When Caltrans started planning for the upcoming highway expansion between Hollister and San Juan Bautista, the San Justo School was, not surprisingly, in the way again, as it had been before Thoeny purchased it. But in this case, it was not Caltrans pushing to demolish or move the old building—it was his neighbors.

“The farmers here wanted me to move it,” he said. “The way the highway construction will go, there will be a strip of farmland between the new and old roads which would be hard to access and farm. But this building is 100 years old—wood studs and concrete fascia. You would have to take it apart, but it would fall apart first.”

According to San Juan Bautista farmer Tony Alameda, he and several other farmers objected to the CalTrans road design. “One has to question whose history is more important…. The history of a neglected school structure off limits to the public and not providing any economic value since it closed in 1969 or irreplaceable farm ground that is being taken out of production for the rerouting of Highway 156 freeway around this historical eyesore!,” Alameda said.

Historic as it is, the school is actually the second one built on the property, which had been donated by the Flints when the land was part of the Flint-Bixby ranch. The lot also contains two buildings from the first school, including the stable where students would keep their horses during lessons.

Caltrans, acknowledging the history of the property, helped Thoeny preserve it, so the final plans are for the new roadway to go behind the school, leaving access to it on what will be the new frontage road. Caltrans did not respond to our inquiry about the school.

“They worked with me through the state’s office of preservation,” he said. “And in this case, the state and I were on the same page. You need to preserve as much of the past as you can. And, as a side benefit, being on the frontage road is going to make it a lot easier for me to get in and out of here!”