High collision rate makes the project a priority, even though it will eventually be removed. 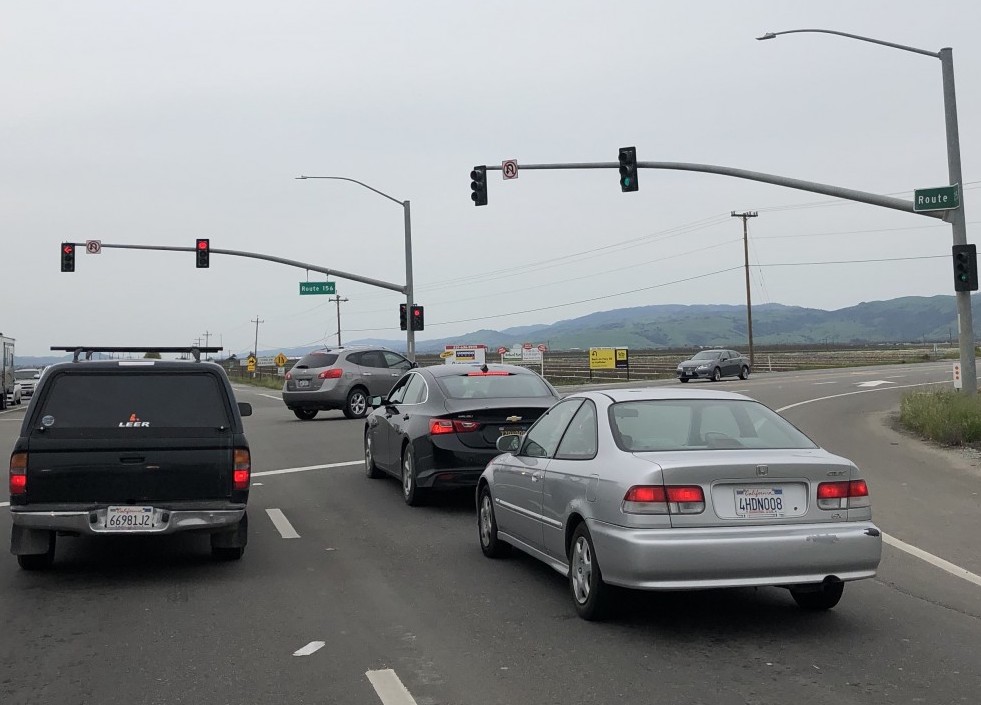 The intersection of State Routes 25 and 156. Construction of a two-lane roundabout is anticipated to begin in June 2021. Photo by Noe Magaña. Caltrans and local transportation agency Council of San Benito County Governments (COG) are at odds over building a $10.7 million, two-lane roundabout at the intersection of State Routes 25 and 156. At a March 21 meeting, COG directors said it was a waste of money because the roundabout would eventually be replaced by an overpass in the expansion of State Route 25.

According to a presentation by Caltrans Project Manager Brandy Rider, the intersection has become a high priority for the agency because of its collision rate of 1.11 per million vehicles, double the state average of 0.5 per million.

In the period between July 2010 and June 2013, there were 37 collisions at the intersection with 16 injuries and no fatalities, according to the agenda packet.

The project, funded through the State Highway Operation and Protection Program (SHOPP), is in the design and right-of-way phase, Rider said. Construction is scheduled to start in June 2021 and last for six months.

As Caltrans gets closer to a final design of the roundabout, it will seek public input at a town hall-style meeting to complement the survey data it has collected, Rider said. No date has been set for the meeting.

“We have a public that’s very frustrated right now about how money is spent on projects that really make no sense and they’re basically Band-Aid projects here,” COG Director and Hollister Mayor Ignacio Velazquez said.

Aside from the financial “throwaway aspect,”  County Supervisor Anthony Botelho, filling in for COG Director Mark Medina, said he believed the roundabout was a solution for traffic congestion, but not for safety.

When COG Director and Hollister Councilman Marty Richman asked whether some of the money for the proposed roundabout could instead be put toward expanding State Route 25, Rider said that Caltrans was looking at how to better align project schedules.

“We have to do something as far as safety is concerned,” Rider said. “Whatever that project ends up being, that’s the project we’re going to do.” She added that if SHOPP funds were to be transferred to the State Route 25 expansion project, the time between projects would have to be minimized.

Rider told BenitoLink on March 26 that there is no project schedule yet for the State Route 25 expansion, but Caltrans and COG are working to get a draft schedule completed by spring or early summer.

COG Director and County Supervisor Jim Gillio said he didn’t want to lose sight of the safety behind Caltrans’ interim solution. He said Rider’s estimated $9 million in costs of collisions without any improvements was conservative, because just one fatality could cost more than that.

According to the project study report in the agenda packet, the combined average daily traffic on both highways is 44,800 vehicles. The report states there are a combined 4,106 vehicles passing through the intersection each hour; about 432 of them are trucks.

As a new safety measure before constructing the roundabout, Caltrans plans to increase the signal head size at the intersection from 8 inches to 12 inches this summer.

“It’s providing more area so that people can see the signal from a greater distance as they are approaching the intersection from all locations,” Rider said.

Link to COG agenda packet here. (Though pages are not numbered, the study report begins on page 153 of the 188-page agenda packet. Tip: If you download document as PDF, program that is used to open document might have a tool that shows page numbers.)