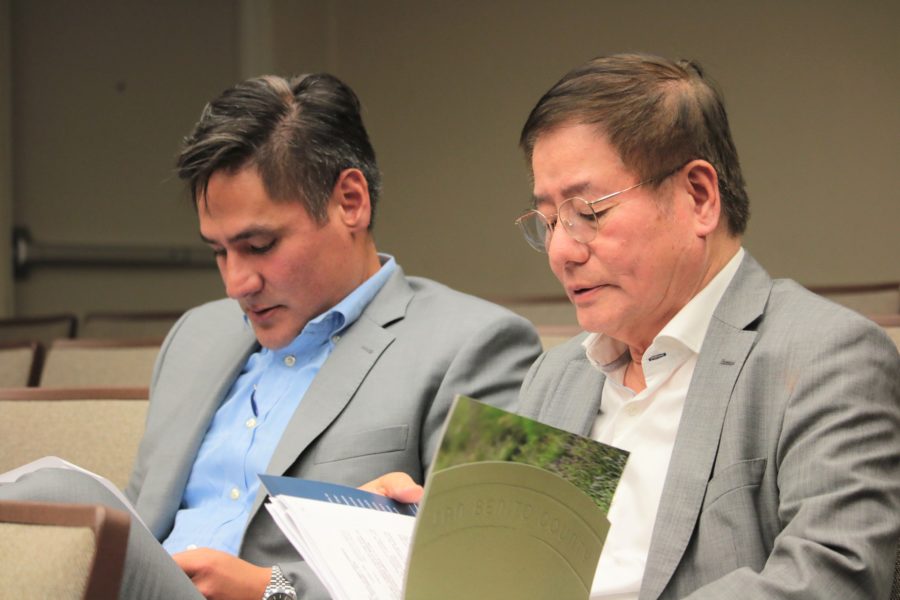 Joseph and John Wynn sat through discussion of their cannabis project at the Sept. 3 Hollister City Council meeting. They were ready to show a slide presentation for the project, but were not asked to do so. Photo by John Chadwell.

City Manager Bill Avera explained that the development agreement was only to set rates and terms for the operation, and not traffic mitigation. Photo by John Chadwell.

Councilman Marty Richman was concerned about the high cost of roundabouts, but favored them for affording easy u-turns and right turns. Photo by John Chadwell.

The Hollister City Council unanimously approved a development agreement with Milpitas-based CC Campus LLC on Sept. 3 for a 207-acre mixed-use business project located west of San Felipe Road. The project is zoned for a 50,000-square-foot facility to cultivate cannabis and hemp, as well as manufacture and conduct laboratory testing of edibles and other products for the wholesale market. The agreement is for 25 years with three 10-year extensions.

Beyond the cannabis facility, there is another project, a smart glass factory, that involves the same plot of land. Both projects belong to John (Nguyen) Wynn, the San Jose entrepreneur who bought the land north of the Hollister Municipal Airport from local developer Hugh Bikle that was leased by Swank Farms. Wynn also bought the two, 18-hole golf courses at Ridgemark, as well as the clubhouse and tennis center. He is planning on a 20,000-square-foot retail space there, as well. Even though the smart-glass project wasn’t discussed at the Sept. 3 meeting, it is actually further along in the development process.

In August 2017, City Manager Bill Avera described that Wynn planned a 100,000-square-foot manufacturing smart glass business next to the larger cannabis campus that won’t be open to the public. At the Sept. 3 meeting, Avera told council members that not everything in the project was cannabis-related and that there are also proposals for a hotel, a university and various other businesses. While there is potential for multiple businesses, he said, the agreement before them was only to allow cannabis operations on the property.

Avera estimated that within the proposed 50,000-square-foot facility there was potential for $6.6 million in sales tax for just the cultivation component of the cannabis campus. He said he did not know at this time how much revenue could be generated through gross sales.

The project could also fund two roundabouts on San Felipe Road—one at Bert Drive (currently a dead-end road behind Corbin Motorcycle Seats & Accessories), and a second located a half-mile north to facilitate access into the property. Avera said the developers (Wynn and his son Joseph) had legitimate issues over conditions of approval adopted by the Hollister Planning Commission. He recommended that staff go back to the Planning Commission to resolve them there rather than include them in the development agreement.

Mayor Ignacio Velazquez’s only issue with the project related to the roundabouts. Avera said in discussions with the Planning Commission that it was apparent the geometry of a roundabout, associated with various speed limits, is the most difficult to determine, especially when the city may not already own the right of way.

“If you want a roundabout on 200 acres, that’s very easy to design,” Avera said, “but when you take the existing right of way on San Felipe Road and try to put a roundabout out there, sometimes the geometry just doesn’t fit and you have to acquire property out there. That puts the onus on the developer, as in this case, if Mr. Wynn needed part of my property to build a roundabout so he can continue building his project, all of a sudden my land just got a lot more valuable.”

Velazquez asked if staff needed more time to work on the agreement. Avera suggested the council approve the agreement as-is, and then go back to the Planning Commission to modify conditions of approval to make it easier to deal with mitigation issues pertaining to the California Environmental Quality Act, and to allow traffic engineers to come up with a functional design for the roundabouts. Avera said the agreement was only to set rates and terms for the operation, and not traffic mitigation.

All council members, except for Councilman Rolan Resendiz, said they had met previously with the Wynns to discuss their plans. Velazquez had high praise for their professionalism. Councilwoman Carol Lenoir said she wanted more information from the Planning Commission on a roundabout versus a stoplight. Councilman Marty Richman questioned the cost factors of a roundabout versus a stoplight and said that the council had been informed a stoplight typically cost $300,000, whereas a roundabout could cost upwards of $2.3 million. He said he did favor a roundabout north of Bert Drive because people would be able to make U-turns, and it would be easier for trucks to make right turns.

As for the smart glass facility, BenitoLink spoke with Wynn at City Hall following the Sept. 3 meeting. He said he was waiting for building permits to proceed. However, Development Services Director Bryan Swanson told BenitoLink on Sept. 5 that while it is part of the cannabis campus, it’s a separate project on 40 acres called the Clearist Industrial Park, and that the city approved building permits in February. He also said the city approved grading permits in March, but Wynn still needs to submit bonding documents and a biological survey for possible mitigation of kit foxes and burrowing owls. Swanson reiterated that the city is excited about the project and is ready to move ahead when Wynn completes the bonding and biological survey.

Wynn told BenitoLink on Sept. 5 that the smart glass facility would employ approximately 100 people. He said the project can’t break ground, though, until PG&E completes a design to furnish power to the site. He said he paid a deposit and applied to PG&E a year ago, but it has not delivered a design yet. Once it does, he said grading and construction can begin.

He said the city requested the roundabout and his traffic engineers will also have to deal with them.

“If you don’t own the land how [are] you going to do a roundabout?” Wynn said, adding that eminent domain may have to come to play to secure nearby property. “The landowner could delay two years. Then that delays everything.”

PG&E spokesperson for the Central Coast Mayra Tostado said the power company has been working diligently with the Wynns throughout the entire process and look forward to meeting their service needs.

“A design was approved in late July and the customer is currently trenching at the job site,” Tostado said. “Once trenching is complete, the customer needs to request a PG&E inspection. Once they pass inspection, we will schedule an electric hookup.”