No residents injured as teen crashes, is arrested for DUI 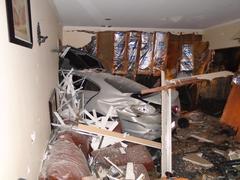 On June 27, 2014, about 10:15 p.m., Hollister police and fire personnel responded to a traffic collision involving a vehicle crashing into a house at the intersection of Prune Street and Eastview Drive. No one was injured and the driver of the vehicle was arrested for driving under the influence.

Trenton Bovee, 18, of Hollister was allegedly driving at a high rate of speed south on Prune Street from Nash Road. A witness said it looked like Bovee was “going a hundred miles an hour”. Bovee failed to stop for a stop sign where Prune Street dead-ends into Eastview Drive. Bovee hit a raised curb, collided with a car parked in a driveway, and continued on where it crashed through the outer wall of a home. It came to rest in the living room. The collision also caused a natural gas line break.

Although the home was occupied at the time, thankfully, no one was in the living room and none of the residents were injured.

Bovee was uninjured; however, responding officers detected an odor of an alcoholic beverage coming from his person. Upon further investigation, it was determined Bovee was under the influence of alcohol and he was arrested for DUI. Bovee was booked into the San Benito County Jail on misdemeanor DUI violations.

Due to major structural damage to the home, Bovee’s vehicle was not removed. Removing the vehicle would likely have caused a collapse of a major portion of the home.

If anyone has information related to this investigation, please contact Officer Johnny Garcia at the Hollister Police Department at 831-636-4330. Persons wishing to remain anonymous may call WeTip at (800) 78-CRIME. Information provided to WeTip may qualify for a reward.