Hollister resident Casey Jahsman is on a mission to inspire smiles through positivity and hand-crafted wood items. 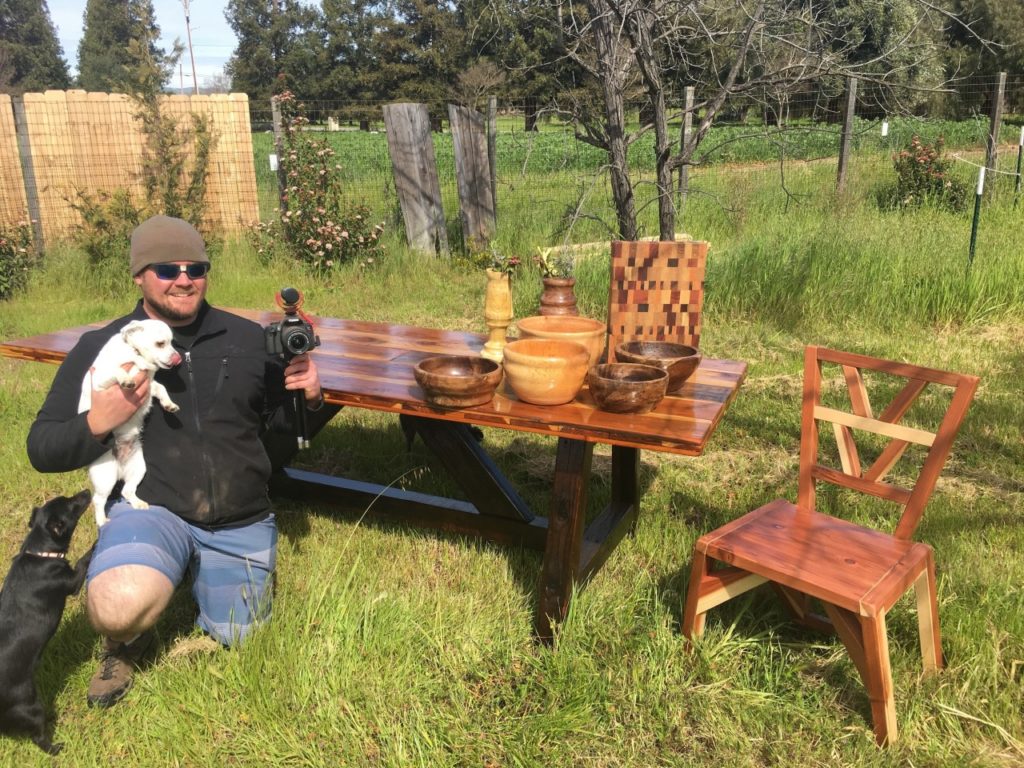 Jahsman, dogs Magnet and Ferris and some of his hand-made items. Casey Jahsman, a Hollister native, is a young man trying to give back to his community. Project Possible is his woodworking business, but it’s also a movement Jahsman champions on social media outlets such as Facebook and through his personal video blog. His goal? Make smiles everywhere.

“I’ve always been a builder,” Jahsman says. When he was younger, he would tinker around with wood, nails and a hammer, but he didn’t initially consider making woodworking his career. When Jahsman finished school, he was intent on being a policeman or firefighter, even completing courses at the Fire Services Academy.

But it was a chance skydiving date that changed his life’s path. “It was an ex that forced me out of the plane,” Jahsman admits. “I was terrified.” After his first jump, he fell in love with the sport and started working for Skydive Hollister. When the company needed basics such as shelves, picnic tables, and benches, Jahsman volunteered his woodworking talent. In the course of his skydiving work, Jahsman also found himself inspired by the positive attitude of his fellow skydivers.

“I heard someone say something very simple that resonated with me—‘We all have to be nicer to each other,’” he said.

All of this resulted in Project Possible. Jahsman realized that he could turn his woodworking skills into a business that could also help the community around him. For the past two years, Jahsman has been taking orders on his website for everything from farm dining tables, to bowls, uniquely designed cutting boards, and much more. All of his current skills result from on-the-job, hands-on practice, as well as many hours spent reading and watching other people work with wood on YouTube. Jahsman doesn’t discriminate when it comes to the types of wood with which he works, using everything from softer woods like pine, fir and cedar, to harder woods like oak, walnut and mahogany, plus anything else he can find.

Almost all of the wood materials used at Project Possible is reclaimed. This allows Jahsman to put his own positive spin on the recent storms that knocked over trees and fences throughout Hollister. The wood that was destined for the dump, is turned into beautiful farm tables and other items in Jahsman’s hands. In fact, Project Possible is always looking for leads on available wood that is going to be junked. Old decks, knocked over fences, pergolas, barn materials, it’s all beautiful in Jahsman’s eyes.

Jahsman uses extra revenue that Project Possible generates to help the local community. He donated money to two Hollister locals last year and often gifts his creations to charity events and auctions. And he means it when he says it—at the end of our interview, Jahsman donated a cutting board to a silent auction in San Francisco.

With an open workshop policy, Jahsman says anyone who wants to make an appointment to learn more about woodworking, or to try to design and building something using the equipment, or even to simply watch him in his element, is more than welcome. A trip to the workshop is free.

"You can spend your whole life [working with wood], and still constantly be learning,” he said. Jahsman is perfecting his lathe work, which is a method used for making bowls and vases where the wood is cut by turning. He hopes that these smaller items, with price points ranging from $40 to $75 will bring more people to Project Possible.

Jahsman accepts custom orders for all items on his website. Customers can supply their own wood, or take a look at the wood Project Possible has collected. Customers can also chat with Jahsman about the desired design of their pieces. He encourages customers to come down to his workshop, so they can watch their item being built, and maybe even have an opportunity to participate in the process themselves.

Ultimately, it’s his own sense of positivity that drives Jahsman forward, as is evident from his recent projects with the wood from recent storms.

“I think it’s really cool to take a tragedy and turn it into something beautiful," he said. "There’s a bright side to everything.”

Below is Jahsman's video blog about BenitoLink's visit to his home and workshop: