Volunteer CASA Advocates are making a difference in the lives of local foster children. 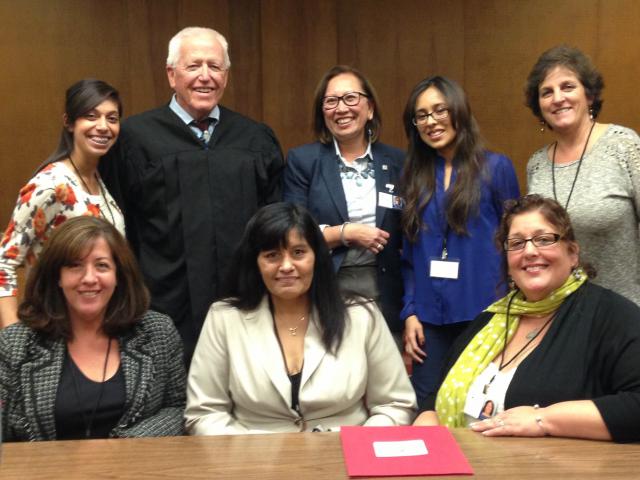 CASA Advocates are ordinary people doing extraordinary things; specifically, serving and supporting foster children from San Benito County. So often, these children fly under the radar of an overburdened child welfare system. By pairing them with an advocate, CASA is providing a specially trained adult whose role it is to ensure the child’s best interest and well-being are being addressed throughout their duration in the foster care system.

“Most often, advocates are the one consistent, caring, and reliable adult in the child’s life at the time,” says Esther Curtice, executive director for CASA of San Benito County, “They spend time with the child, getting to know them, building a trusting relationship, and learning their needs and wishes. They are also the child’s ‘voice’ in court, speaking on their behalf, reporting findings, monitoring case progress and making recommendations to the Judge.”

So who are the advocates? These men and women are members of our community of various ages, professions, educational backgrounds and ethnicities who all have one thing in common, the willingness and commitment to step up and make a difference in a foster child’s life. Since its establishment in 2008, CASA of San Benito County has served 129 children. With an average of 25 or more children on the waitlist, officials say the need for volunteers remains great.

How did you hear or learn about CASA and what drew you to the program?

JS:   I saw a flyer to become a volunteer at the local Starbucks Coffee Shop. What drew me to the program was my love for children, and my natural tendency to want to be there for a child who feels like they are not loved, making them believe that they are worthy, have so much to offer despite any unfortunate circumstances.

MU: I learned about our local CASA group from an ad on NPR. I had a desire to do some volunteer work and give back to the community and this seemed like a good fit. I have a colleague who has been a Guardian Ad Litem for many years and she often spoke of her experiences and how rewarding it is for her.

JCS: While speaking with a client, she shared her experience as a CASA advocate. She encouraged me to contact CASA of San Benito County and emphasized the need for male Hispanic advocates.

How many children have you served?

JS:  I have served one child who was 6 years old, and I’m getting ready to take my next case.

JCS: I have served two pre-teen children. The length of my involvement as a CASA advocate in the first case was close to two years, while my involvement in the second case was six months.

How would you describe your role as a CASA advocate?

MU: It really is a combination of roles – mentor, friend, advocate, steward and “go-between.” Most importantly is advocating on behalf of the child.  Listening to the needs and concerns of the children and finding solutions.

JCS: My role as a CASA advocate can best be described of that of a big brother. Someone who genuinely cares about the well-being of the child and ensures his needs are being met while working in conjunction with different agencies, professionals, school officials, and family members.

What would you say your greatest challenge and greatest reward have been?

JS:  My greatest challenge was trying to keep up with social workers and teachers because being a naturally shy person, I was very intimidated, especially because I was just a volunteer. My greatest reward was getting my CASA child's love and trust quickly, and knowing that I had made a great difference in her life by allowing her to feel like she could be herself and not feel like I am just another adult "working" on her case, but just being there for her because I wanted to.

MU: The greatest challenge has been working through some of the institutional processes that are out of my control.  The greatest reward is, of course, the relationship with the children and seeing the impact working with them can have.

JCS: The biggest challenge for me was finding a balance between family, being a CASA advocate, and work. Though it was difficult at times, the reward was more than worth it.  Knowing you have made a positive impact in a child’s life in their time of need is priceless.

How has being a CASA advocate impacted your life?

JS:  Being a CASA advocate has given me reassurance that I do want to work with kids in my future career, and has given me the confidence to believe I can build rapport and make a positive difference in their lives, as well as gain their trust.

What advice would you offer to anyone interested in becoming a CASA?

JS:   My advice would be to not be intimidated by the reports and court attendance. If you are shy, try your best to overcome it because although you are volunteering, there is more to it than just spending time with a child. Also, keeping up with the social workers and teachers could be intimidating at times, but just know that ultimately we are all working as a team and everyone is just trying to help one another. Plus, CASA provides a ton of support to the advocates.

MU: Be patient – know that the relationship building process can take time and that even when you think the work you are doing isn’t having an impact or is making a difference, it is.

JCS: Being a CASA advocate is not easy. It requires time, patience, compassion and a willingness to serve.  I encourage you to make a positive impact in a child’s life and in your community. Be the change you wish to see in the world!

To learn more about CASA, the need for advocates, and how you can help make a difference in a foster child’s life, visit www.casasanbenito.org or call (831) 637-4992. The next advocate training session starts the week of Sept. 21, 2015. Visit the website or contact the CASA office to sign up. CASA, Court Appointed Special Advocates, of San Benito County is a non-profit organization serving foster youth from our community. Our mission is to train and support community volunteers who advocate for abused or neglected children placed in foster care; upholding the children's rights while pursuing a safe and permanent home. To learn more, please visit www.casasanbenito.org.