The parade route has changed over the years, but the excitement of previewing performers and their mounts hasn’t changed since 1932. 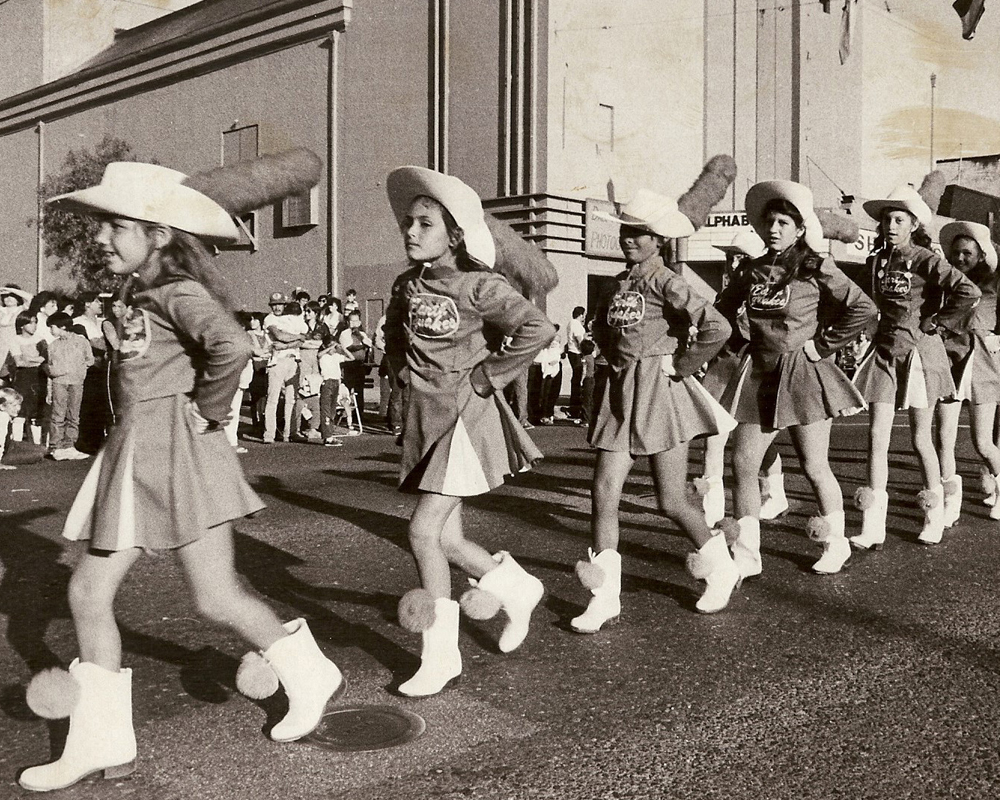 The Hollister Earthquakes Drill Team performed in 1984. Courtesy of SBCHS. Historical newspapers at the San Benito County Historical Society hold the answers to many questions—including the beginnings of the Saddle Horse Show and Rodeo Parade in 1932. The Rodeo began in 1929, but it was not until three years later that merchants in downtown Hollister decided that citizens would enjoy a good parade. The merchants believed that a procession of riders and their mounts would give citizens an opportunity to preview some of the performers participating in the Rodeo.

The parade was the beginning of four days of celebration. The merchants contacted cowboys and cowgirls throughout the county, and many happily consented to enter the parade. The day of the event, cars filled every parking space downtown, crowds were overflowing along the line-of-march, and onlookers filled the windows overlooking the parade.

George Frusetta was given the honor to lead the first parade, a position normally offered to Sheriff Jere Croxon and one he for filled in future parades. As reported in the Hollister Free Lance, the “crack Eagles Drum Corps provided snap and pep aplenty… followed by a cavalcade of beautiful cowgirls and daring vaqueros mounted on the finest blue blood horses in San Benito County.” Spirited horses pulled old-fashioned surreys, and horseless carriages followed at a safe distance; the Kincaids from Tres Pinos entered their 1904 Sears automobile. The line-of-march ended with the “Parade of Horribles,” entries that provided plenty of comic relief.

For many years, parades began at the Ball Park on the corner of Seventh and Sally Street. The procession went south to Hawkins and then north back up San Benito Street to the railroad tracks, made a u-turn and then back to Seventh Street providing an opportunity to see the line of procession twice!

After the absence of the Saddle Horse Show and Rodeo Parade last year, the event is being organized by a committee of rodeo and parade enthusiasts, and the group is working to maintain the historical flavor and excitement of the parade. This year the event will take place on Saturday, June 16th and step off at 11:00 am. Committee Chair, Jessica Brem said, “The parade was moved to Saturday because it is important to include new members of our community who commute during the week—it’s essential to provide them with an opportunity to celebrate our past and to be part of our future.

Parade entries are available online. Dust off your boots and be part of this week-long celebration.