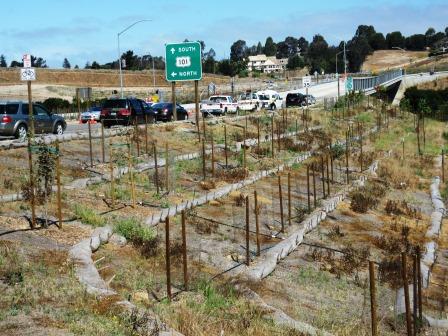 The California Department of Transportation (Caltrans) and the Transportation Agency for Monterey County (TAMC) held a ribbon-cutting ceremony before noon on Jully 17 to mark the completion of the San Juan Road Interchange project near the iconic Red Barn along Highway 101.

The project, in northern Monterey County, removed three at-grade (or below ramp level) intersections: San Juan Road, Dunbarton and Cole Road. The three roads were replaced by a single interchange at Route 101 and San Juan Road. It also effectively converted a portion of the 101 expressway into a freeway.

District 5 Caltrans Director Tim Gubbins told BenitoLink, “This removes the conflict points.” He explained that backed-up traffic is often caused by motorists anticipating container and freight trucks hidden from view by the twisting road before committing to turn. But now motorists can clearly see the trucks as they come into view up the ramp.

Monterey County Second District Supervisor and Professor John Phillips said, “After San Miguel Canyon was fixed, this was the most dangerous exchange.” Assemblyman Luis Alejo recalled the time when he was a resident and “worked at the gas station down the road. As a clerk, I personally witnessed some of the fatalities.”

Aside from the benefits of improved safety, delay reduction and greater mobility for delivery trucks, Gibbs said they had more things to celebrate about the project’s completion. “We are a few months ahead of schedule and no (construction) worker was hurt.”

San Benito County District 2 Supervisor Anthony Botelho said, “I understand, the project was also under budget, according to Granite Construction.”

Congressman Sam Farr recalled that the project started in 1975 when he was involved at the supervisor level. Botelho said that the groundbreaking of the $69 million project was only two-and-a-half years ago.

Farr talked about the significance of the successful project “at a time when Washington has not been able to authorize a highway plan, even though it’s a priority. “There has been no tax increase since 1993 and there are less revenues coming in because of more fuel-efficient cars. In 2005, Congress did not pass a highway bill that’s more than two years. They could not agree.” He also said that “both Republicans and the administration do not want to increase tax.”

He said that one of the hoped-for sources of revenues for new highways is the vehicle miles traveled tax. “It will change the way we drive because it is based on the miles motorists traveled,” Farr said, adding that a pilot program in California could happen as early as 2016 and that Oregon has done so on a smaller scale.

“The future is uncertain for the U.S.," Farr said. "Infrastructure is the stimulus for economy. But we must invest in infrastructure. The problem is, the Chinese are investing in every infrastructure in every country. It helps them get their materials out but it does not benefit the locals.”

State Senator Bill Monning  (D-Carmel) said that this is a time with limited resources, so projects such as the San Juan Road interchange prioritize for maximum safety and benefits. He said that the concern now is how to find funding for an prioritize America’s long-neglected and decaying infrastructure.

Alejo said that the project was “a good use of taxpayers’ money.” Botelho said the project was important because “millions of dollars are moved daily here.” From a historical perspective, Farr said, “This is where California was discovered on foot.”

Red Barn Flea Market owners Ken McPhail and Fran Ellingwood approached the podium at the end of the ceremony, with McPhail noting, “The Red Barn is still open.” He thanked TAMC and Caltrans for fixing the road at the end of the interchange leading to their property and calling it Red Barn Road.