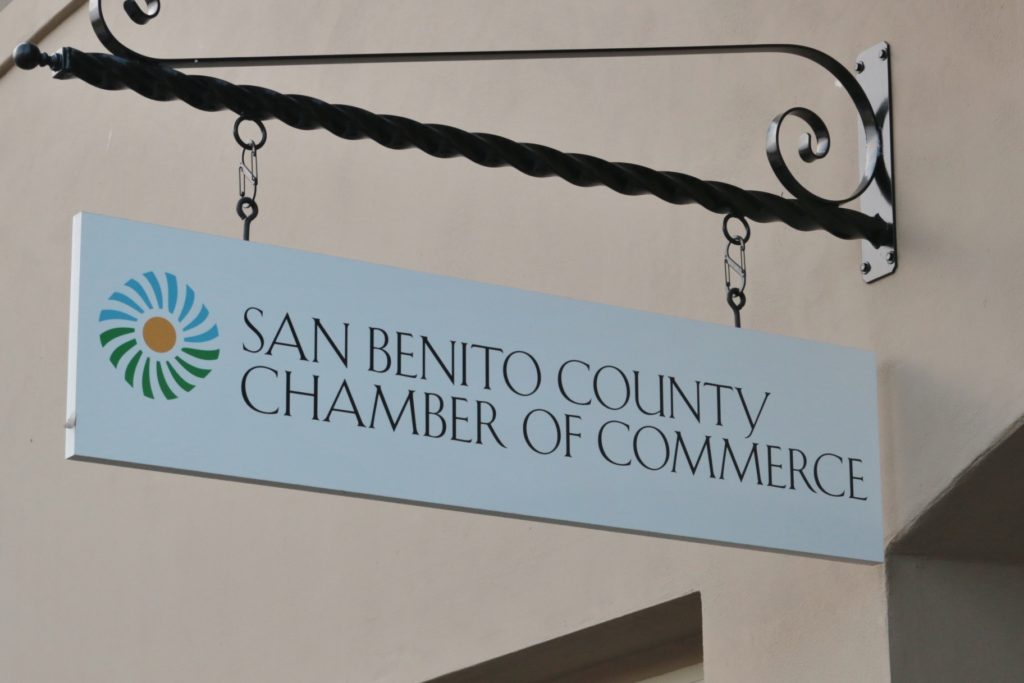 The Chamber of Commerce has been selecting people and business of the year since 1978. The San Benito County Chamber of Commerce and Visitors Bureau announced the winners of its people and businesses of the year, under the categories: Man, Woman, Ambassador and Business of the Year.

Tony Schneider moved to Hollister when he was a high school sophomore in 1957. After graduating, he joined the Coast Guard. He has been married to his wife, Juanita, for 50 years and has four sons, all of whom live in Hollister. He worked for Watsonville Lumber and then Gilroy Lumber for a total of 25 years. He has worked for Hollister’s Ace Hardware for 18 years. He volunteers as a set carpenter and builder for the San Benito Stage Company, and has been a docent for the San Juan Bautista State Park since 1986. He also volunteers as a kitchen helper at community dinners; and appears as Santa at schools and church fund raisers. When asked if money and logistics were no issue, what would he like to see in the community to improve the quality of life, he said that he would like to see a central community performing arts complex.

Donna Holmes, president and CEO of Holmes & Sons Trucking Inc., grew up in San Jose. She moved to Lake Tahoe in 1972, and worked for the South Tahoe Community College. In 1979, she and her family moved to San Juan Bautista, where they started the trucking business. She has a long history of community volunteerism, including everything from making sausage for Service Club fundraisers; and serving in the Chamber of Commerce and Rotary. For the past few years, she has been active with the Strategic Planning Commission of San Juan Bautista Youth Commission.

“As a member of the Rotary and the Chamber of Commerce, there is always opportunity to help,” she wrote on her application and added what she would do if money were no object, “I would like to give San Juan Bautista a facelift by creating a more welcoming downtown that looks as though we were eager to have visitors.”

“The man and woman of the year has been going since 1978,” said Juli Vieira, president and CEO of the Chamber of Commerce and Visitors Bureau. “How it works is all of the past men and women of the year select those for this year. This year, we had 15 former members come voting.”

Vieira said anyone in the community can nominate a person for man or woman of the year. These people are then notified that they have been nominated; then they have the choice to accept or decline. If they accept, they fill out an application-questionnaire, which past winners will read and then vote on. She clarified that no one can nominate themselves.

“We had nine men and 13 women nominated this year,” Vieira said. “After the past winners read the applications we get together for a secret-ballot vote.”

Some have turned down the nomination, she noted.

“There are some who want to remain anonymous and not get any particular recognition, but for the most part, they accept and fill out the application,” Vieira said. “Then we have a round-table discussion. Some people will know different things that the nominees have done in the community. After that we do a ballot. Sometimes we have to do more than one because there might be a tie.”

The businesses of the year are also nominated by people in the community.

“There were 22 nominations this year,” she said. “The Chamber of Commerce Board of Directors selects the winners in the same way that the man and woman of the year are chosen. This year we actually had a tie and we had to re-vote in one of the categories.”

The Ambassador of the Year is Ralphena “Ralphie” Hobbs.

“The Ambassador of the Year is selected by the past Ambassadors of the Year by what they have done for the Chamber of Commerce over the past year,” Vieira said. “Ralphie has been at everything. She attends all of the ribbon cuttings. She attends the mixers and is so helpful. She has gone above and beyond.”

The Ambassador of the Year, along with the Man and Woman of the Year, will ride in the Annual Rodeo Parade and are introduced and acknowledged at all of the chamber events throughout the year. The ambassador typically attends all ribbon cuttings.

Vieira said the main benefit to winning any of the awards is community recognition. There is no financial benefit, she said. She said the winners will be introduced at the Dec. 9 Chamber Mixer, at 5:30 p.m., to be held at Paine’s Restaurant.

The other winners include:

McKinnon Lumber has been a part of Hollister since 1869, when it was established by A.P. Boyd. Archie McKinnon bought the business in 1910. The Barrett family has owned it since 1972. John Barrett described it as a “full-service lumber company.” He described the single hardest obstacle in operating the business:

“The downturn in the economy from 2006 to 2013 created a critical hardship for us. We had to lay off some employees, cut hours for others and reduce our inventory. All of this allowed us to stay in business until things got better.”

Paine’s Restaurant had its origins in the 1920s as the Paine’s Club. In 1980, the Kouretas brothers bought it and it became Paine’s Restaurant. The ever-changing economy has made it difficult at times, but the restaurant continues to flourish by providing a friendly, welcoming dining experience.

Gregg and Marie Hoffman founded Redbeard 25 years ago as a freelance design agency in San Diego. It quickly became recognized throughout the financial and credit union industry for its award-winning designs. It moved to Hollister in 1999, where it continues to grow and thrive providing communications solutions. Given the opportunity, Redbeard would like to see downtown Hollister become more pedestrian friendly with restaurants, shops and art galleries. They would like to see more events and more global promotion of the city.

“There is incredible knowledge and expertise in our county and the surrounding areas, especially in the Ag industry,” Marie Hoffman wrote. “Why aren’t we hosting symposiums and educational opportunities that could attract hundreds or even thousands of people from other states and even countries to learn about the smart, effective practices used in our region?”

Tonascia Farms was established in 1983, by Joseph Tonascia when he was 25. He started out with no employees on 20 acres behind San Benito High School, and has since grown to more than 900 acres and 40 employees during the peak season and another 200 through contractors. He grows 32 varieties of vegetables, apricots and walnuts. He said he enjoys working with youth and if money were no issue he’d build an athletic facility.

“I would like to be able to provide more jobs to young people, so they could learn what physical work is and the satisfaction of a job well done,” he wrote.