Despite opposition from some community members and leaders, Hollister council agrees to allow the flag to be flown. 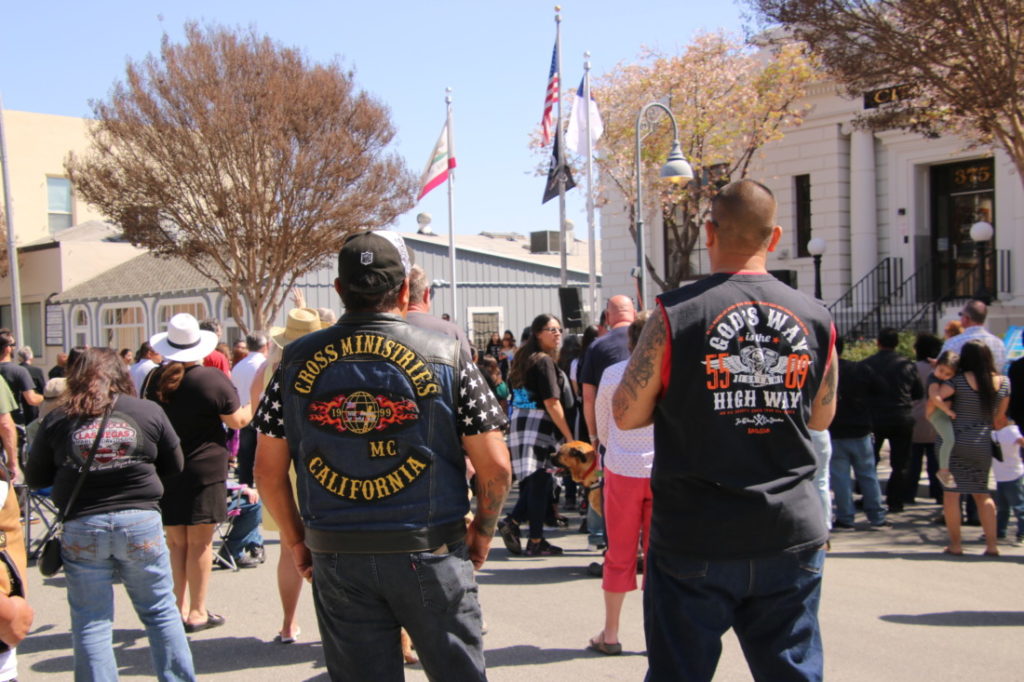 From bikers to ranchers and teenagers nearly 100 came to watch the raising of the Christian flag. Photo by John Chadwell. 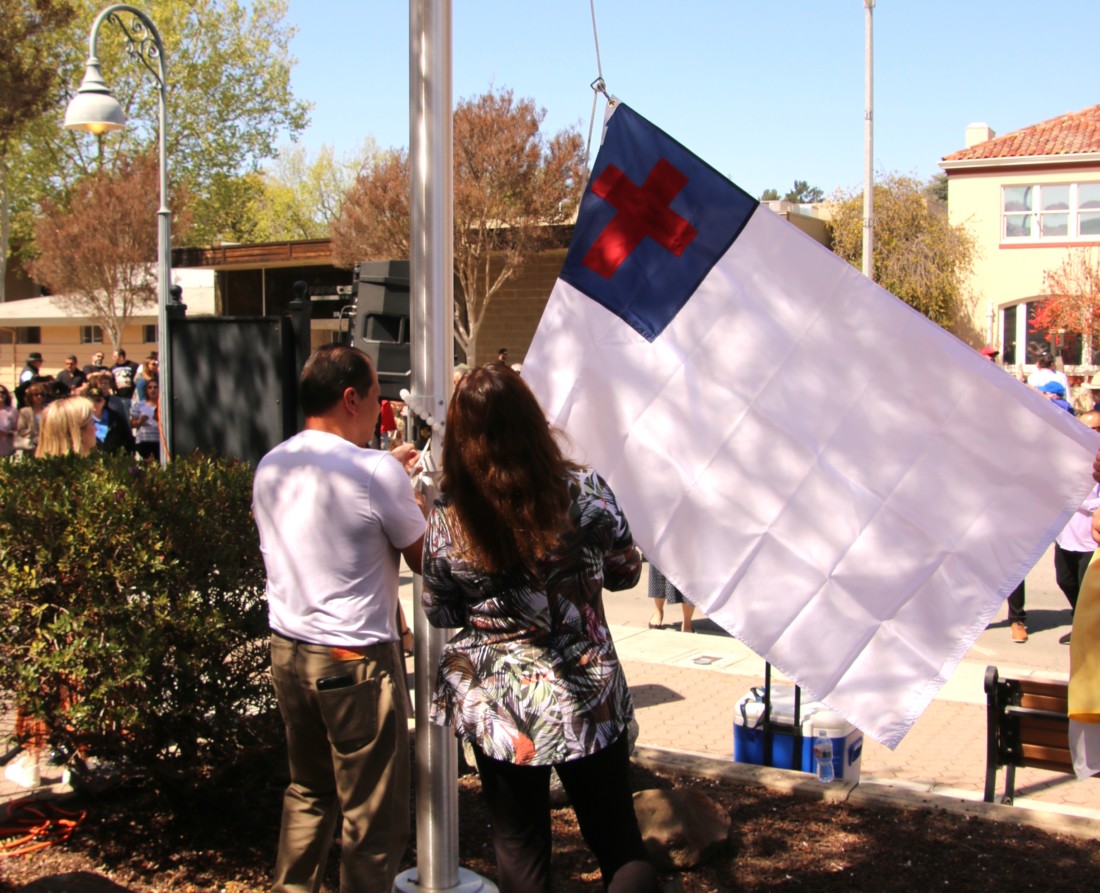 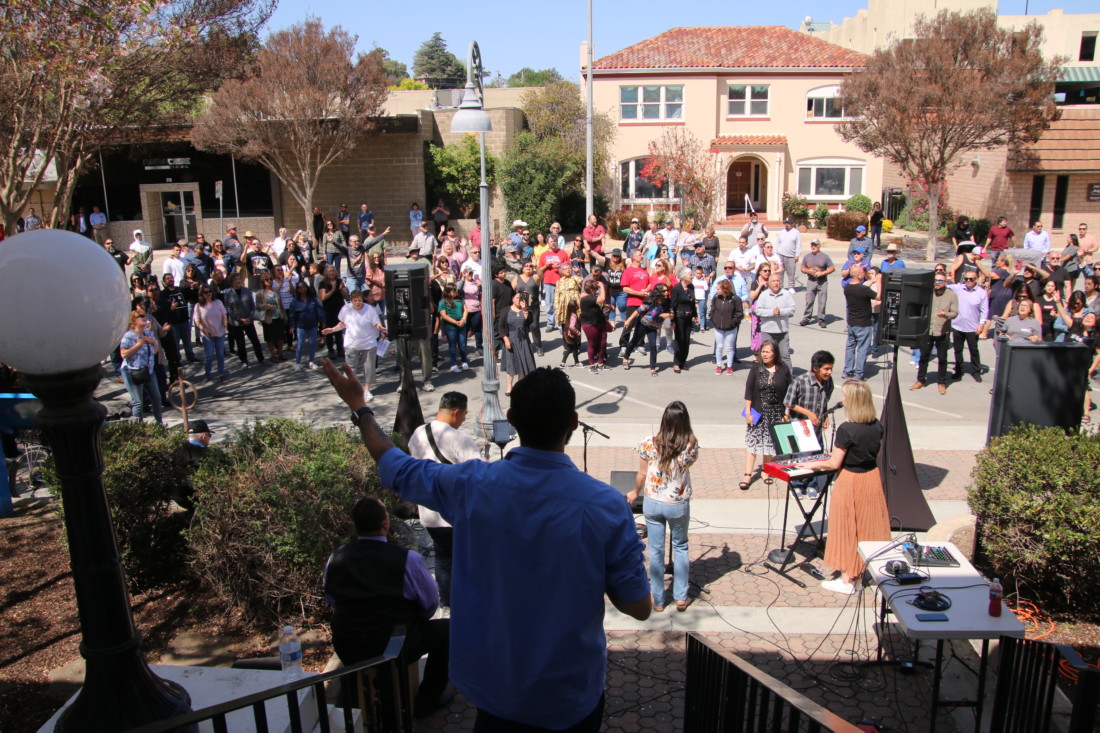 Bands played for the crowd that came to witness the raising of the Christian flag. Photo by John Chadwell. 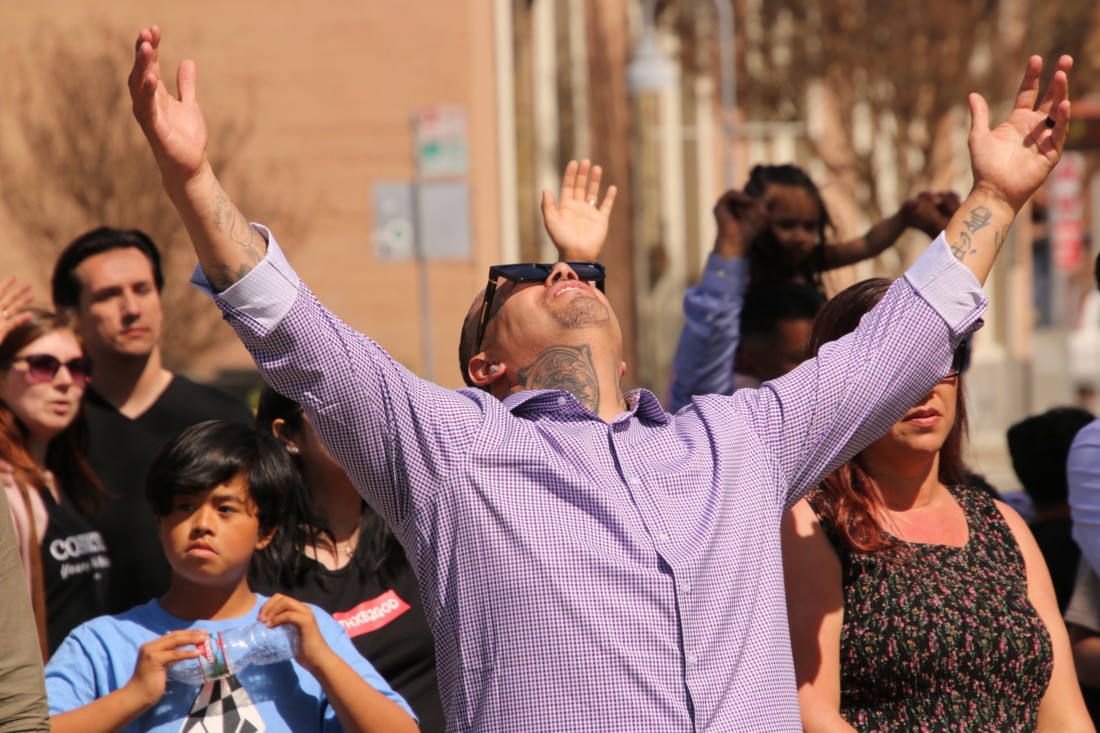 Some attendees got caught up in the moment during raising of Christian flag. Photo by John Chadwell. 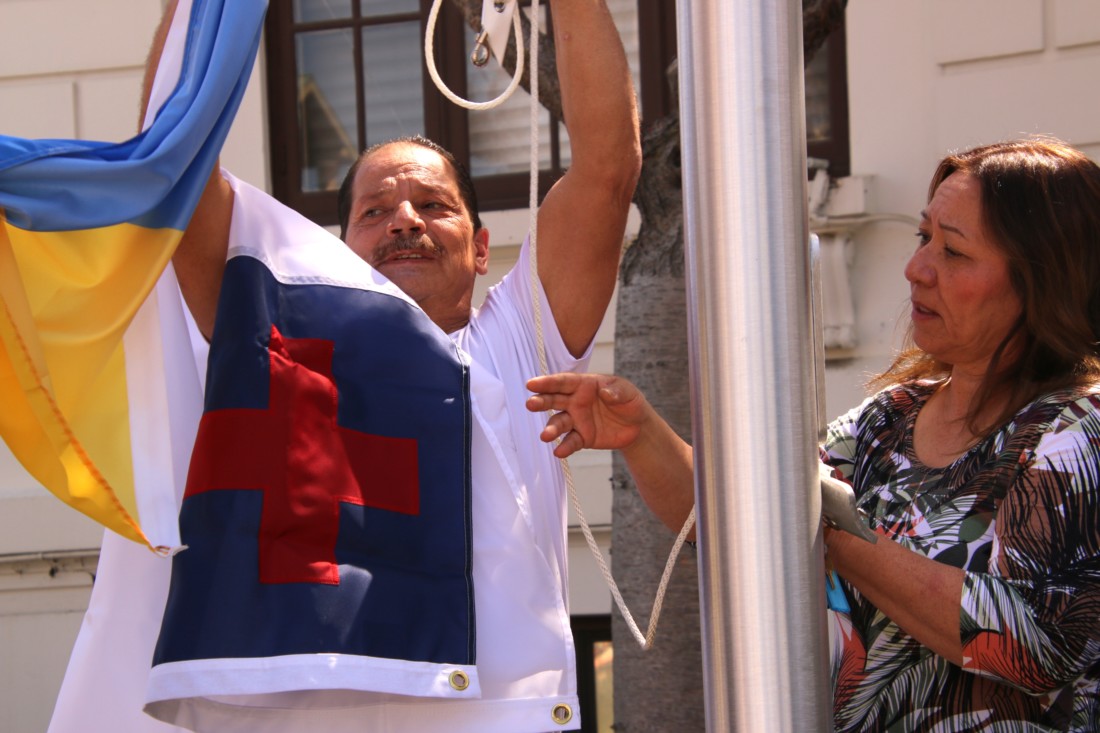 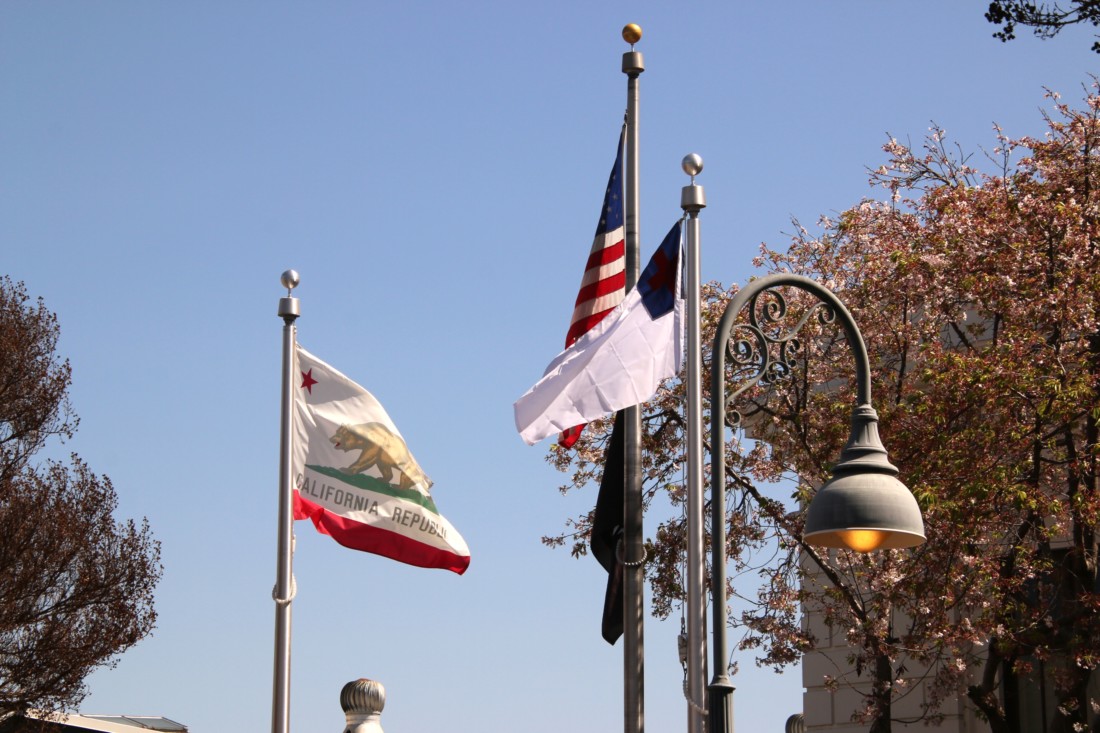 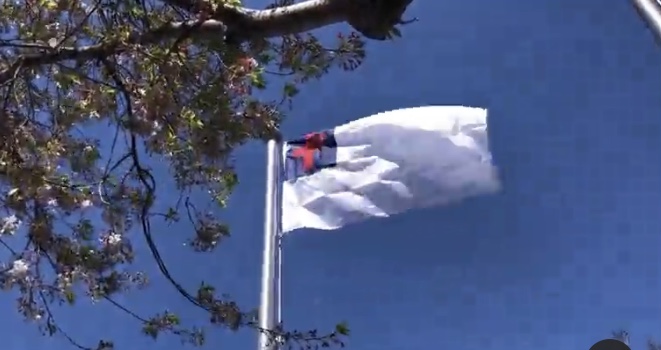 Hollister City Councilman Rick Perez hoisted the Christian flag up the “unity/community” pole in front of City Hall on April 3, to cheers, music, and hands raised in praise. Even with little advance notice, nearly 100 turned out for the historical event—the raising of the Christian flag in front of a government building in Hollister.

The idea of raising any flag, much less the Christian flag, in front of City Hall was destined for controversy. Former Councilwoman Honor Spencer reasoned that by putting the LGBTQ flag outside City Hall “we’re opening a can of worms and the first time we do not say yes there will be lawsuits.”

Spencer went a step further by saying, “Then we allow Black Lives Matter. We allow Muslims. We allow satan worshipers. We allow Christians. And we allow—here’s the big one—the Ku Klux Klan, the Confederate flag. There is no way you can say no.”

Elia Salinas, who is running for the County Board of Supervisors District 4 seat, also said there must be a separation of church and state, mistaking, as many do, that the statement is in the Constitution.

There is nothing in the Constitution that says there must be a separation of church and state.The metaphor actually was in a letter that Thomas Jefferson penned in 1802 to the Danbury Baptist Association when he declared when the American people adopted the establishment clause they built a “wall of separation” between the the church and state.

Perez brought the idea of flying the Christian flag to the City Council for approval. He also paid for the flag and insisted on being the one to raise it.

“It’s because of the body of Christ I’m where I’m at today,” he told the crowd after the flag raising. He told them of his journey through multiple local churches on his path to recovery, though he did not elaborate. “Most of all, it wasn’t the buildings, it was you guys who strengthened me, so I am here today. This is a declaration that our city is under God.”

He added, “This is not about any other flag. This is about the flag that represents Jesus Christ. It’s only cloth. We carry the flame and the light that’s inside our hearts. This is our community and we’re under attack by fentanyl and gangs. The enemy is using everything they can to take away our kids.”

When the City Council considered raising flags other than the California and POW flags on what was then referred to as the unity pole, the process was fraught with controversy. Even so, the flag resolution was approved on May 3, 2021. Under the policy, residents who wanted to raise a particular flag were required to fill out an application that included obtaining 125 signatures.

Ultimately, the rule was changed. Going forward, residents only needed to bring their requests to the councilmember who represented them to take it to the council. Perez objected to raising the LGBTQ Pride flag on a technicality, in that the form submitted by Councilman Rolan Resendiz did not have the required photo with it.

Resident Tony Avilla, who is also running for the County Board of Supervisors District 4 seat, claimed other flags were being discriminated against. He said the LGBTQ flag did not go through the same process that the other flags went through. Those flags included the Thin Blue Line flag, to honor law enforcement, and the Christian flag, both of which Perez had nominated.

On Sept. 7, 2021, the Hollister council approved flying the Thin Blue Line and the LGBTQ Pride flags and were in agreement to repeal the flag ordinance to “streamline the process.” Perez pointed out the inequity of the process when the request to fly the Christian flag was tabled while City Attorney Jason Epperson sent a letter to the California attorney general for an opinion. Brett Miller, city manager, told BenitoLink April 7 that the attorney general never responded.

At its next meeting, the council approved all current flag requests, but Salinas and Resendiz claimed Christians only wanted their flag to fly in retaliation for flying the LGBTQ Pride flag.

At that time, the city had already spent $12,500 to erect two additional flagpoles and only the LGBTQ Pride flag had been flown. Still to be flown, according to Miller, are the Thin Blue Line, Breast Cancer Awareness, and a new City of Hollister flag.

Last month, the Ukrainian flag was flown, a direct contradiction to the previous flag policy. Mayor Ignacio Velazquez said the city attorney had found a loophole that allowed it. However, Ordinance 673 reads “the flag of any sovereign nation or state shall not be flown or displayed at city facilities nor on city property nor shall any such flag be affixed or attached to any city property.”

The debate over flying religious flags in front of government buildings went to the U.S. Supreme Court over Boston’s refusal to fly the Christian flag. The Court of Appeals for the First Circuit ruled in January 2021 that Boston could refuse the request and decreed the refusal did not violate the First Amendment rights of the private groups requesting the flag be flown.

The Supreme Court has not yet ruled on the Boston case.

As the flag raising and celebration ended, Matt Kirkland, campus pastor of South Valley Community Church, concluded it with a prayer. He told BenitoLink the Christian flag represents the long heritage of Christian faith in America.

“That Sunday afternoon we were not from this church or that church, we were the Church of Hollister, all different in our worship styles, but still united as the Body of Christ,” he said by text message. “We know we do not represent the faith of everyone in San Benito County, but we do represent many, and for the many that showed up to celebrate the Christian flag raised, it will be a reminder to pray for and encourage our city and county leaders.”