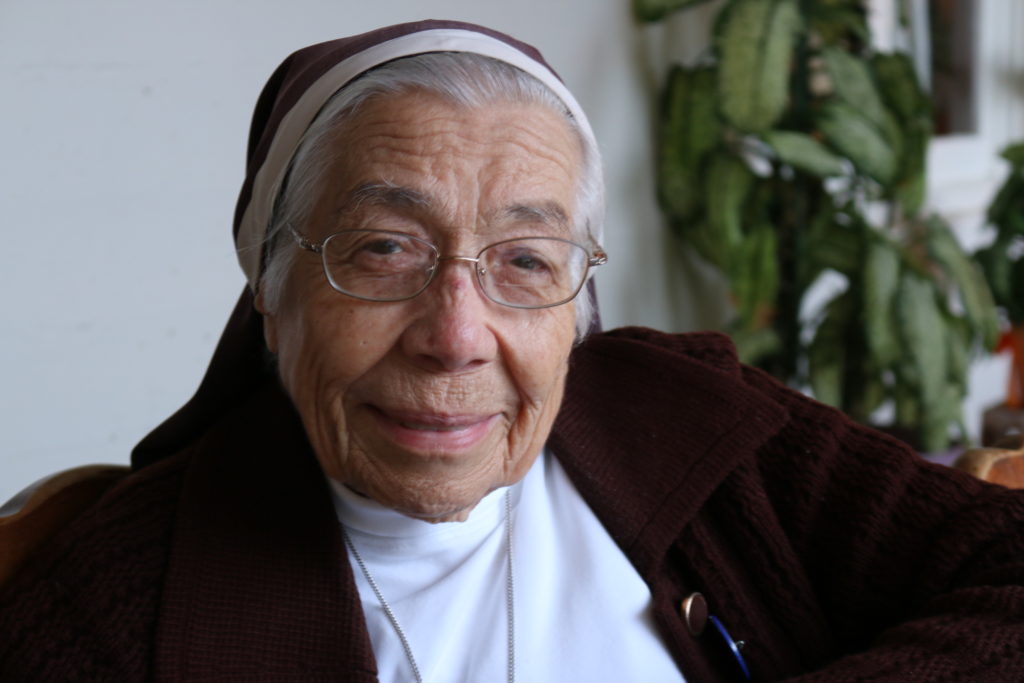 Sister Loretta Guevarra has worked at uniting Christians for 75 years.
×

An international religious experience called a Week of Prayer for Christian Unity (WPCU) is taking place in San Benito County from Jan. 18-25. The event is designed to bring Christians together in prayer and this year’s theme is, “Called to proclaim the mighty acts of the Lord.”

While this is the first time the ecumenical movement has come to the area, it has been an annual occurrence worldwide dating back to 1908. During the week, a number of local churches—St. Benedict’s Church, South Valley Community Church, St. Luke’s Episcopal Church, First Presbyterian Church, Abundant Life Christian Fellowship, and Sacred Heart Catholic Church—are opening up one of their evening services to members of other congregations to take part in united prayers.

That first observance of Christian unity back in 1908 took place in the chapel of a small Atonement Franciscan Convent of the Protestant Episcopal Church, 50 miles from New York City. The new prayer caught on and quickly spread far beyond the Franciscan friars and sisters to a worldwide observance among millions of people of diverse religious persuasions.

Thanks to Sister Loretta Guevarra, a diminutive, 91-year-old nun who came from that same Franciscan order that started the movement, WPCU has made its way to San Benito County. BenitoLink talked with Sister Guevarra at the Sacred Heart Convent, where she lives in retirement after more than 75 years of service to the church. Retirement is probably not the right phraseology to describe her present situation. She does do a little catechism teaching, but her mission in life is furthering the WPCU experience.

At 91, Sister Guevarra sees her efforts as merely a continuation of a mission she has been on since she was 12 years old,  when she was living on her father’s Atwater ranch in the Central Valley. This was around 1936, when the area was still mostly small towns and countless acres of fruit orchards.

One day, a missionary from Africa came to her church. When Sister Guevarra heard his message of Christian unity and the plight of the poor children in his country, she was changed for life.

“He was teaching the gospel of how Jesus was talking to God and asks that they all be one, and that went deep into me,” Sister Guevarra said. “Jesus wanted everybody to be united. I knew we were all divided and I didn’t want that and I said I’m going to work so Jesus will get that. It was a desire I had and still do have.”

She told her parents she wanted to be a nun and to help the poor children in Africa. Her dad wasn’t happy about his 12-year-old daughter’s transformation, but her mother challenged her convictions by asking her what she intended to do about helping others while waiting to reach the proper age.

Sister Guevarra said she and some friends set up a lemonade stand that turned out to be a popular watering hole in the hot peach orchards. She put up a sign that read: “Lemonade for African kids.” All the money was donated to the poor and by the time she turned 16 she was ready to enter training to be a nun.

She said she couldn’t remember how many places she has served over the subsequent 75 years, but her journey started out back in California, where she traversed up and down Highway 101 for a number of years working with different parishes, where she held catechism for children and night classes for adults.

But in her heart she still wanted to be a missionary in order to “unite the world in Christ.”

“I thought, ‘when am I going to be a missionary,’” she said. “Then I was sent to Brazil, and I was there for 31 years. Now I was a missionary. There weren’t any roads back then and I’d travel with three others from place to place and stay at people’s homes, and then everybody would come to that place and I’d teach them.”

Seventy-five years and a world of missionary work later, Sister Guevarra still believes as she did at 12.

“I wanted to answer God’s prayer that we may all be one,” she said, “and instead of Christians fighting each other over doctrine, we should be united. We all believe in one God.”

Sister Guevarra said she has felt strongly about Christian unity ever since one day in Brazil.

“I was walking along the street and this pastor saw me and he crossed over to the other side because I was a nun,” she said. “When I started working on Christian unity (at the Mission in San Miguel, CA) I told the seven pastors who got together with me to pray about that and they laughed and said, ‘that sounds like us.’ Later on, one of them came over and told me he was sorry I had that experience. It was nice that he said that because I was there to ask them if we could get together under one roof and pray together.”

She said she has prayed for the unity of all Christians from the beginning. When she transferred to Mission San Miguel, where she stayed for eight years, she carried on her efforts and ultimately 35 churches joined in the Week of Prayer with her. The churches have continued to carry on with the Week of Prayer for 15 years, even after she has been gone for the last three years.

“We would pray for the unity of all Christians because we believe that there is strength when people pray together,” she said. “We have to face the reality of what’s happening in the world. Christians are being killed because they’re Christians, which happened even during Jesus’ time. That’s why I say we should be united because of these people who like to cut off people’s heads might be a little more afraid.”

The reason she believes so strongly that it is her mission directly from God to continue organizing and encouraging local churches to participate in the Week of Pray is because last year she was gravely ill and taken to the hospital—where she died.

“They worked on me and I came back and they told me that I had died,” she laughed. “God wasn’t finished with me. So I continue to try to unite Christians in prayer.”

The traditional period in the northern hemisphere for the Week of Prayer for Christian Unity is Jan. 18-25, which was proposed in 1908 by Rev. Paul Wattson, the founder of the Society of the Atonement to cover the original days of the feast of the Chair of St. Peter (Jan. 18) and the Conversion of St. Paul (Jan. 25).

Nightly prayer services will be held from 7-8:15 p.m. at a different church in Hollister this week: