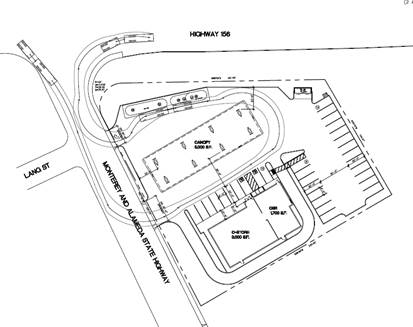 The San Juan Bautista Planning Commission gave an informal project review to a proposed project at the intersection of Highway 156 and The Alameda between the San Juan Inn and Hwy 156, diagonally across from the Windmill Plaza. There have been no applications submitted at this point. The parties are seeking information which would improve the success of an application and acceptance by the community.

The representative for the project presented a preliminary design which incorporated suggestions made to the developer by City Manager Roger Grimsley. The broker, Mr. John McCormack, expressed the interest of the owner, Mr. Harvey Dadwal, to create a design consistent with the desires of the community.

There were two preliminary designs; one oriented towards Hwy 156 and the other towards The Alameda.

The preliminary design is for a 4,000sqft building, housing; a commercial business and a restaurant and a gas station with 8 pump islands, covered by a canopy. The preliminary drawing was of a adobe-like structure incorporating many of the visual themes of San Juan. The creation of such a commercial center would bring much needed additional revenue to the City of San Juan through taxes and is consistent with the City's General Plan.

The Planning Commission made several suggestions, such as including more wood, and evoking the agricultural theme of the city, such as was done at the Windmill Plaza. Mr. McCormick noted that due to the presence of flammable fuels there are restrictions upon what materials may be used in building gas stations.

The Commission's comments were generally favorable comments about the project. The developer will take the suggestions and see what he may be able to incorporate into the project to improve it for the formal application at the next Planning Commission meeting.

There were four variations of the project which were being suggested. The drawings represent three of those variations.