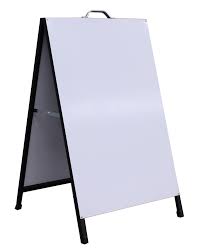 The Hollister City Council voted Aug. 4 to suspend enforcement of the municipal code governing the parking and storage of recreational vehicles and boats on private property as well as limitations on A-frame/sandwich board signs for 120 days to make the ordinances more consistent with the General Plan.

The council directed city staff to re-work the ordinances, so the council had to vote to authorize the temporary halt on enforcing the rules. There was no discussing of the matter at the meeting.

Hollister Municipal Code as currently written allows for a recreational vehicle or boat to be "parked, stored, left, kept or maintained in the driveway" for a total of 14 days each year and the vehicle or boat may not extend into a sidewalk or a public right-of-way.

City rules also allow one A-frame or sandwich board sign per business on the private property of the business being advertised. The portable sign must be placed so as it provides an unobstructed pedestrian path to entrances and exits to a business.