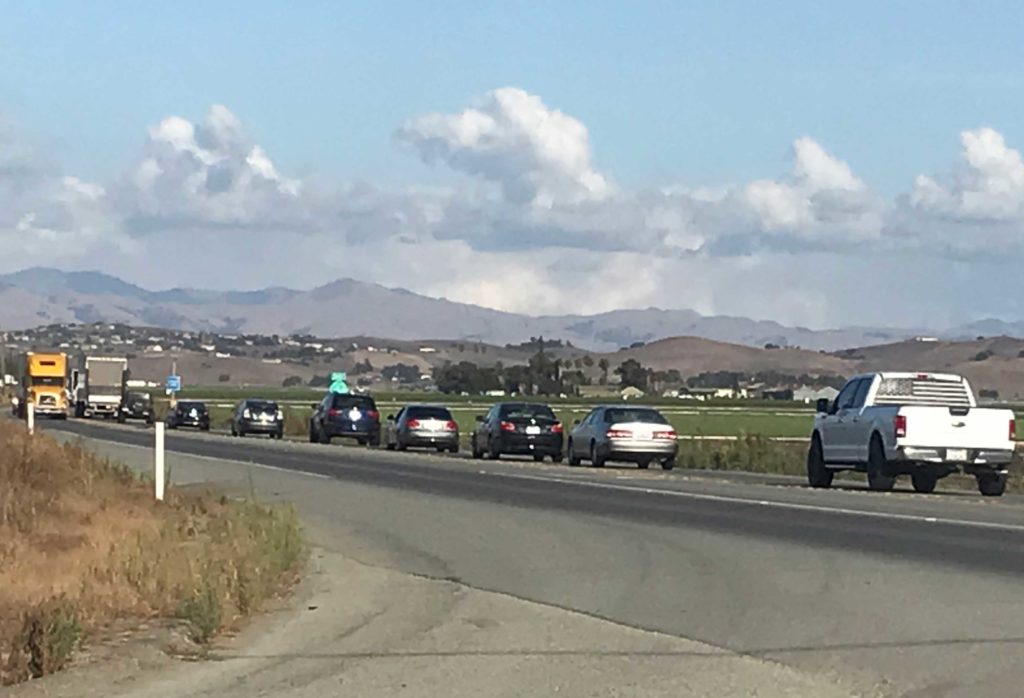 It’s astonishing to me that the very small pro-growth minority of San Benito County chooses to ignore what’s become obvious to the rest of us:

Rapid growth has led to increasingly extreme congestion on local roads, overly anxious drivers, dangerous conditions, less time for commuters with their families and a general decline in quality of life for our residents.

As someone who lives off Highway 156, I see and experience this madness every day. And although I don’t often drive Highway 25 in the morning or evening commutes—I’m one of the lucky ones in that sense—I’m fully aware that the road is getting more congested and dangerous over time.

It’s a disaster waiting to happen on a daily basis, and we saw the result last week when two big rigs collided and led to the death of a 49-year-old San Juan Bautista man—the third fatality on Highway 25 this year alone.

In the short term until these two highways in and out of town are expanded, there’s only one logical solution: elected officials absolutely must slow the pace of housing growth.

Over the past two or three years, a previously bad situation with traffic congestion has become much worse due to out-of-control growth allowed by local government entities.

Some in the vast minority of remaining pro-growthers say a continued housing boom is inevitable. They might point to the six-year building moratorium from 2002-2008 and subsequent Great Recession, and note how San Benito County simply had catching up to do. They occasionally argue the flawed notion that building more homes locally will somehow lower the price of those modest, $700,000 homes and make them more “attainable.” Then there are those who say the county should continue growing rapidly because we need more revenue.

These perspectives are all inherently flawed, and our elected leaders must stop listening to them.

Growth is not inevitable. San Benito County residents and leadership can choose instead to slow down the pace of growth and do more to preserve our precious, rural heritage. That’s what elections are for, and I’m the one District 2 supervisor candidate who has a serious commitment to slower growth in San Benito County.

Sure, we had a long lag in housing growth in the 2000s and part of this decade. But it was long overdue when considering the vastly irresponsible pace of growth in the 1990s—perpetuated by backroom deals and ill-advised favors bolstered by the still-thriving good-old-boy network—led to a massive sewer spill and inadequate road infrastructure.

As for government funding, it’s well known that new housing is revenue-neutral at best. Housing can actually lead to a bigger tax burden for local residents because all those new homes and residents require additional, expensive services. Relatively small property-tax benefits from new homes don’t tend to cover additional costs, which invariably leave taxpayers on the hook and less resources for government employees.

The problem with all of these flawed arguments—driven by the pro-development lobby—is that they do nothing to solve or curtail the inadequate traffic infrastructure currently plaguing the brunt of residents who commute on a daily basis, and even those of us who work in the county.

Talking to everyday District 2 residents in this campaign has reaffirmed what I already knew: An overwhelming majority of local people are fed up with the pace of housing growth and want to see it slowed, at least until we see major upgrades to our road system.

I would estimate well over 90 percent of locals strongly prefer slower housing growth in San Benito County. Consistently, residents in our largely commuter workforce tell me their painful experiences on the roads. Without prompting, rapid housing growth and resulting road conditions are the two issues that come up again and again and again.

Just last week, I talked to a Hollister man who told me about his daily commute to South San Francisco and how he now regularly spends eight hours of his day on the road commuting. Think about that. He puts in a full day of work driving his vehicle, and that doesn’t even include the time spent at his job. How can anyone function this way and still be happy? Not surprisingly on that Saturday, the man looked utterly exhausted but was gracious enough to share his story.

Another resident who often gets stuck sitting on Highway 25 had a thoughtful suggestion for the 11-mile stretch: Could someone at least think to put a rest stop along the highway for drivers who need to use the restroom when traffic moves at a snail’s pace?

Frustrations like these are certainly justified. Commuters are spending long hours in local traffic. If any sort of incidents happen on either 25 or 156, it’s a nightmare getting anywhere—which is an alarm bell for potential disaster responses as well.

When the tragic, fatal accident happened last week, Highway 25 was closed for nearly 12 hours—from the morning commute at 7:30 a.m. until the evening commute is supposed to be winding down after sunset. That frenzy of disorderly traffic found its way onto other highways, including 156 that backed up severely the whole day, and onto the rural back roads that feel more like raceways these days than pleasant drives in the country.

There is one answer to this growing problem until Highways 156 and 25 are expanded: It’s time to put our collective foot on the brake pedal with regard to housing growth, and I’m committed to getting that done if elected as District 2 supervisor.