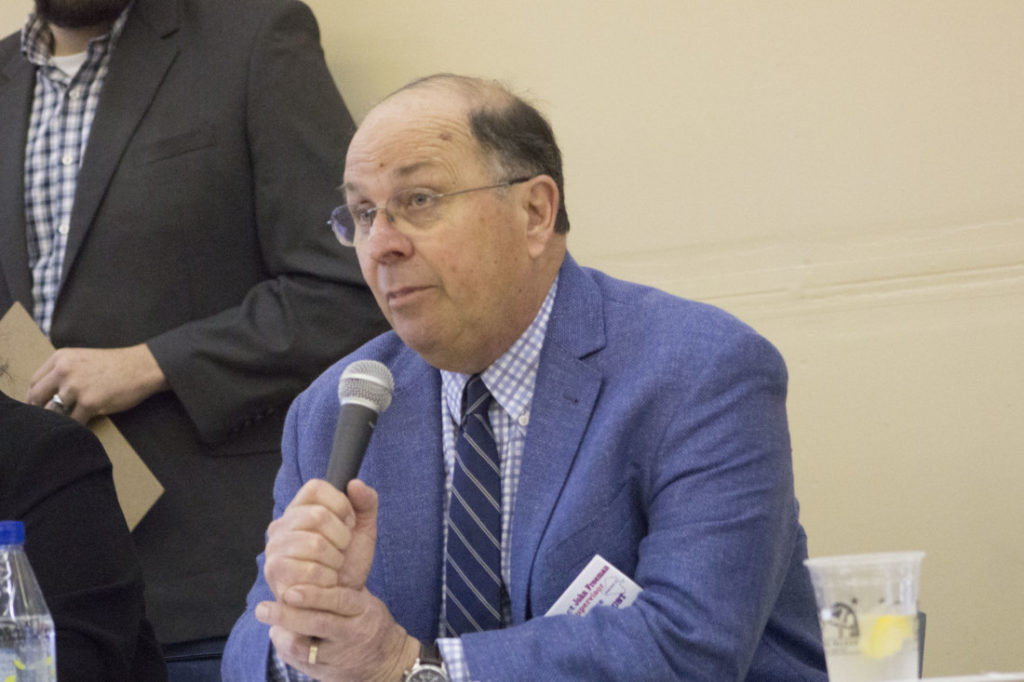 This column was contributed by San Juan Bautista City Councilman John Freeman, who is a candidate running for District 2 Supervisor. The opinions expressed do not necessarily represent BenitoLink or other affiliated contributors.

John Freeman is announcing that if Measure K passes, and if elected as San Benito County Supervisor for District 2, he will vote to require that any developers building within a Highway 101 node be required to purchase an “Open Space Easement” to be applied on the rest of 101 for the same amount (or more) of land being converted to Highway Commercial. Although he is open to the thoughts of his future colleagues on the board, candidate Freeman currently envisions a multiplier in the conversion. For example, at a 1:3 ratio, if a developer within a node might take advantage of 20 acres, that developer might then be required to purchase a 60-acre Open Space Easement somewhere on the rest of Highway 101, to keep it open and scenic.

Freeman commented: “This will limit any development on Highway 101 to the four specific, defined spots as defined in the General Plan, but keep the rest of the entirety of the corridors open, scenic and beautiful forever.”

The Open Space Easements that candidate Freeman is referencing, are of course, in perpetuity and provide a permanent block to future development. They are the tool used by the Big Sur Land Trust and other conservation groups around the state to preserve and protect special places.

Just as in Big Sur, “present agricultural and rural uses would of course continue, but any commercial or residential development on the rest of Highway 101 would be absolutely barred forever,” Freeman said. Going even further, Freeman said he will require that each of the four nodes on Highway 101 have electric charging stations in equal or greater numbers to the gas pumps. This, Freeman said, will improve San Benito’s carbon footprint and attract EV owners “to visit our county.” It will also “future proof” the gas stations from obsolescence in ten years, he said.

“This action will keep our scenic Highway 101 from becoming more developed for generations to come, which is the best solution,” Freeman said. “While it will provide for very limited, controlled, regulated and design-themed development at only four locations, the rest of Highway 101 would remain protected and preserved forever, as a result of the required ‘Open Space Easements’ purchased and put in place by the node developers.”

Freeman concluded, “We can do exceptional things here in San Benito County because this is an exceptional place.” He added everything that might be built out on Highway 101 should benefit from the public’s input which “will only improve any of the four stops.”

“I truly hope that this concept to require developers of these nodes to purchase Open Space Easements to protect the entire rest of Highway 101 will stop the rancor and division that has besieged District 2. Both sides can win. The county can obtain much needed tax revenue, and for those of us who live here, we can preserve the rest of Highway 101 as we enjoy it now, keeping it from becoming a Prunedale or a Gilroy.”

Addendum to the above: On Tuesday, Feb. 11 the Santa Cruz County Land Trust announced that they have entered into an agreement to purchase 600 acres of Rocks Ranch. The Rocks Ranch Road node will be restricted to a very limited development. There will be no housing tracts at this site if the purchase is finalized. There will be no water parks, or large supermarkets or anything like this at the node. A wildlife passage tunnel under Highway 101 will be included in the project, which is a very worthy goal. This action reinforces the fact that people can come together to preserve open space by either easements or a purchase of the land and still create small sites for economic development.

John Freeman may be reached at:

Resident Randy Logue writes about COVID-19 and San Benito County's move back to the purple tier.

COLUMN: Captain’s Log—Victim of gangsters or gangsters as victims?

Captain Eric Taylor with the SBC Sheriff's Office writes the first in a series of columns about the evolution of Hispanic criminal street gangs in California. Taylor has spent the majority of his career in gang enforcement, disruption and intervention.

COMMENTARY: Congrats to San Benito voters for their No on Measure N votes

Brian Schmidt with Green Foothills congratulates voters and draws parallels between the defeat of Strada Verde and the 2018 defeat of Measure B in San Jose.