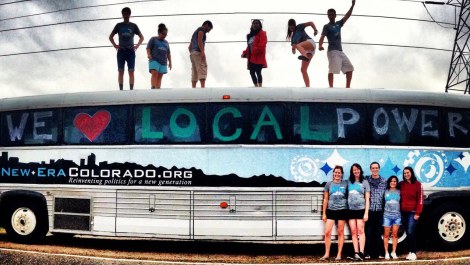 San Benito County already provides a good deal of "clean energy jobs" in the businesses of organic agriculture and grassfed beef cattle, who wish to promote and maintain a pristine environment in which to grow and provide some of the finest agricultural products possible.  If there is even a hint of "dirty energy" drilling near their establishments, they will find it difficult to market their products. It’s time to transition to a clean energy economy, much like the efforts in Michigan, where  "communities and workers are looking for a plan to move beyond coal [fossil fuels] and climate disruption." It’s time for California's utilities to transition to renewable energy sources and increase energy efficiency, which are excellent investments for both ratepayers and shareholders.  This is to ensure  prosperity, good jobs and healthy families in the future.

"Just like we have climate change deniers, we have clean energy deniers…," says Scott Sklar of the Stella Group. He reported in January 2014 that the American Council for an Energy-Efficient Economy (ACEEE) claims that robust investment in energy efficiency could save $1.2 trillion by 2020, and the United States could create 1.3 to 1.9 million jobs by 2050, through the deployment of energy efficient technologies.  The Alliance to Save Energy (ASE) projects 1.3 million jobs by 2030, according to their report, "Energy Efficiency Services Sector: Workforce Size and Expectations for Growth."

An international jobs study released at the end of 2013 by the International Renewable Energy Agency (IRENA), created by the G-8 as in intergovernmental organization that supports countries in their transition to a sustainable energy future, estimates that 5.7 million people worldwide were employed in the renewable energy sector, directly and indirectly in 2012. Generally, information for electricity-generating renewable technology is more available than those for related transportation and heating/cooling.  However, citing the reduced taxes from fossil fuel consumption to our federal budget, one can see that these sectors are have a large fiscal impact.

Sklar goes on to explain that what differentiates energy efficiency and renewable energy from the more traditional centralized fossil fuels is that the energy generation, distribution, integration, installation and service is much more distributed evenly across the Unites States (or for that matter, the world).  He goes on to say, "Whether it's energy produced along electric transmission lines, electric distribution lines, natural gas pipelines and landfills, behind the corporate of facility fence, or on or near a building — its decentralization (just like cellular towers) is just a natural jobs multiplier."

This job growth is just too difficult to deny, in spite of energy deniers. Since the "fracking" industry has used job creation as its political rallying cry, we should take a look at how that plays out with competing industries that create clean and sustainable energy.  After all, weaning ourselves from the ill effects of Big Oil, is doable and beneficial for all of us.  Let's examine if we can use our freedom to choose.

Sklar also reports that solar jobs increased nearly 20 percent since the fall of 2012, which is 10 imes the national average job growth rate. Nearly 77 percent of these jobs are new jobs (rather than existing positions that have added solar responsibilities). This means one in every 142 jobs in the U.S. were created by the solar industry. Solar employment is expected to grow by 15.6 percent in 2014. Two-thirds of new solar hires are living-wage installation jobs. Nineteen percent of these workers are women, and one in six solar workers is Hispanic. This industry is also exceeding the percentage of veterans employed in the broader U.S. workforce.

Other renewable energy sectors, such as wind-related jobs, Include development, siting, construction, transportation, manufacturing, operations services reached 80,700 jobs by January 2014.  Hydropower, according to Navigant Consulting, estimates 200,000-300,000 direct jobs currently in this industry.  This estimate assumes 2-3 full-time equivalents per megawatt (MW) to maintain, operate  and license compliance for the existing 100,000 MW fleet. The lastest estimate from the Geothermal Energy Association was 25,000 jobs by 2012. This industry expect to increase it employment by 2,805 jobs this year.  The Biomass Power Association estimates that the biopower employs approximately 70,400 jobs directly by the ethanol industry, with an additional 400,677 indirect and induced jobs being produced.

Let's also add to this mix the energy efficiency services sector, which in 2008 estimated by the Lawrence Berkeley National Laboratory estimate that 380,000 people were employed in this sector. The Energy Efficiency Services Sector (EESS) is defined as multi-disciplinary sector that address the design and construction of homes and buildings, and the installation, use and maintenance of high-efficiency equipment and technologies in homes, buildings, and industrial processes.  The EESS includes engineers, designers, economists, marketers and trades people."

All this means that "changing the model" is a very sound economic direction for San Benito County to take.  Besides California, other states that are jumping into this market are the states of Michigan, Maryland, Pennsylvania, Illinois and the province of Ontario, Canada. If we follow Ontario's example, according to John Farrell of Grist, we can copy the keystone of this program, which is a “buy local” rule that requires wind and solar power projects, which want California's attractive power payments, to make sure that these projects are constructed with at least 60 percent of California made materials. This means that Californians can get cleaner electricity and significant economic development for their clean energy commitment. For instance, "Ohio and Illinois require part of their renewable energy standard to be meet with in-state projects. Other states provide greater credit toward compliance with their renewable energy standard for in-state projects. One state, Washington, offers multipliers to a state tax credit for projects with 'made in Washington' parts."

According to Farrell, who is the author of Energy Self-Reliant States and a senior researcher at the Institute for Local self-Reliance, he states  "Over 30 states have committed themselves to renewable energy and potentially higher electricity costs.  In exchange, states should consider their legal authority to keep those jobs within state borders and to the economic advantage of [their] citizens."

A better example is to go very local. Let's look at Boulder, Colo., where "the city and its citizen allies have turned traditional thinking on its head, envisioning a city-owned electric utility that maximizes local benefit rather than shareholder returns, that generates power in town rather than importing it, and that maximizes renewable energy instead of clinging to fossil fuels. They have rigorously studied other city-run utilities (29 others in Colorado alone) to learn best practices for running a local electric system. They have shown that switching to a locally owned utility could nearly triple renewable energy, halve greenhouse gas emissions, and compete on price with their current two-faced corporate overlords."  We can also keep our eye on Santa Fe, New Mexico and Minneapolis, Minn., who are "pushing for a similarly candid assessment of whether the incumbent utility is providing the best possible energy future."  So, San Benito, let's lead the way, by ridding ourselves of "dirty energy" and creating a strong economy through locally provided "clean energy."  We have so much to gain, while also improving our quality of life, if we make studied and clear choices for our own benefit.

Start with a YES vote on Measure H, to ban extreme extraction processes from our county. Then let us look at how we want to move forward to create a safe and meaningful future.